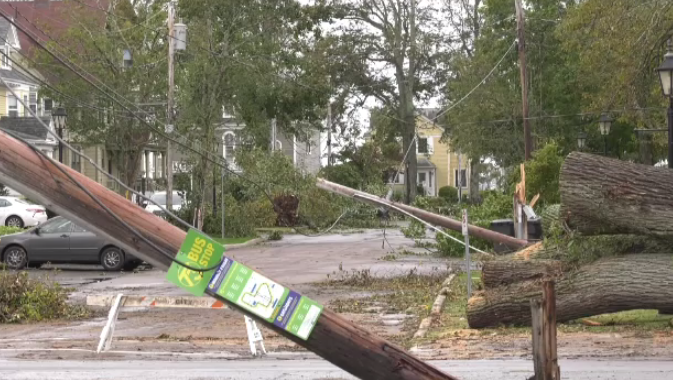 Employees who have suffered wage losses due to the destruction of post-tropical storm Fiona on Prince Edward Island are set to benefit from a new program by the provincial government.

“This program is for those who may have lost their jobs in a seasonal business that isn’t going to continue because of Hurricane Fiona,” said P.E.I. Premier Dennis King during a news conference Friday. “We will be as flexible as possible with all Islanders who will be looking to take advantage of this and to get to work to rebuild our province.”

Prospective applicants can access the program through the Department of Fisheries and Communities. More information about the application process is expected later Friday.

Meantime, the province is partnering with the Canadian Red Cross to offer financial assistance of $250 to households facing financial hardship.

“If you’re fortunate enough to have insurance, some of your food losses or other impacts may be covered, but many Islanders don’t have that,” King said. “This can be for things like uninsurable losses of food, maybe it can help with gas for the generator, or other basic needs.”

According to King, the Red Cross is working as fast as possible to administer financial assistance by e-transfer, through gift cards, and if required, cheques.

The premier also announced that the province has launched an online form and an email address in hopes of reducing call volume levels at Access P.E.I. locations to help with debris removal. King says requests are being triaged with the priority being primary residences where trees and debris continue to cause safety concerns or where residents remain unable to return to their property.

“We know very well that there are damages to cottages and seasonal properties, but we’re trying to focus our effort first on primary residences and make our way through that in the day ahead,” he said.

King noted that the province has received more than 700 online submissions as of 2 p.m. Friday. That’s in addition to over 2,000 calls for assistance.

When it comes to power outages nearly one week into the storm, King pointed out that P.E.I. has welcomed a record number of crews from across Canada to help restore electricity to customers.

“We do know that some will remain without power for another two to three days,” King said, adding that he has made a request to the Minister of National Defense for an extra week of additional military resources to assist with storm response efforts.

The premier also committed to keeping warming centres open as long as needed.

According to a representative for Maritime Electric, crews have restored power to almost 47,000 customers on Prince Edward Island.

The per cent of Islanders with power by region is as follows:

The representative from Maritime Electric noted that crews are continuing work to restore about 35,500 customers, with an estimated goal of restoring power to 6,500 customers by end of day Friday.

Minister of Education and Lifelong Learning Natalie Jameson confirmed at Friday’s press conference that the province hopes to have as many students back to class as possible over the upcoming week.

Jameson noted that with safety as a priority, structural engineers have evaluated damaged buildings and fire inspectors have been dispatched to assess all of the schools on P.E.I. According to Jameson, contractors have already managed to seal up roofs and repair damage at the majority of schools impacted by Fiona.

On Friday morning, the P.E.I. government launched a webpage listing all schools and their readiness to open on Monday following a three-category flagging system: green, yellow, red.

Green schools are ready to open Monday, yellow schools are still being worked on but are near completion and could be ready by next week, and schools listed in red will not be able to resume operations on Monday.

The webpage is set to be updated twice on a daily basis to give parents and guardians the most up-to-date information as possible regarding return dates.

According to Jameson, P.E.I. has identified 31 schools that are safe to open on Monday, 27 that are near completion, and four schools that will not open Monday.

One of the most damaged buildings, the Cardigan Consolidated School, could take a few weeks to repair, Jameson says.

Parents were notified on Thursday evening that students from Cardigan Consolidated will be temporarily relocated to a dedicated wing at Montague Regional High School, beginning Wednesday.

Other schools that have sustained extensive damage and will delay re-opening include École Évangéline and Queen Charlotte Intermediate.

“None of our schools will be moving to remote learning at this time,” Jameson told reporters. “With the power outages and the disruptions in web connections, virtual learning is not a viable option right now.”

Parents can expect to be contacted directly about any changes to bussing or schedules for the upcoming school week.

Jameson says student well-being teams are up-and-running, and respite care is being organized for families affected by extended closures or relocations. The province’s School Food Program will also be running on Monday at all operational schools.

“We don’t want anyone to go without food,” she said, noting the reception centers will be open throughout the weekend for food, water and power.

According to Bill Lawler with the Canadian Red Cross, the organization has received 4,350 individual applications from residents across P.E.I., with a total of nearly 35,000 Canadians requesting help since the storm began on Sept. 23.

Bob McGrath, an actor, musician and children's author widely known for his portrayal of one of the first regular characters on the children's show 'Sesame Street' has died at the age of 90.

Former U.S. President Donald Trump faced rebuke Sunday from officials in both parties after calling for the “termination” of parts of the U.S. Constitution over his lie that the 2020 election was stolen.