P.E.I. fishermen, processors still in disagreement about price of lobster 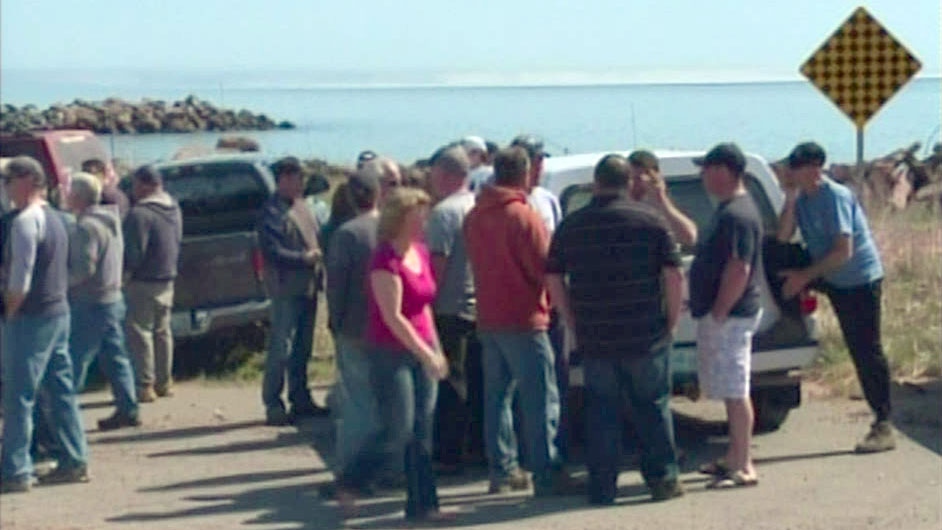 About 100 lobster fishermen decided to tie up their boats in protest of low prices for lobster during a meeting in Antigonish, N.S., Wednesday, May 8, 2013

CHARLOTTETOWN -- A meeting between Prince Edward Island fishermen and seafood processors ended in frustration Sunday as the contentious dispute over the price of lobster continued.

Michael McGeoghegan, president P.E.I. Fishermen's Association, said his organization could not reach an agreement with the P.E.I. Seafood Processors Association after meeting in Charlottetown for about two and a half hours.

More than 1,000 Island fishermen have had their boats tied up since last week, saying they will not fish until they are paid about $5 per pound for market-sized lobster.

Prices are currently about $3.25 per pound.

McGeoghegan said he had been hopeful that there would be some movement from the processors.

"We thought for sure that they would meet us partway and we would be back fishing," said McGeoghegan. "Nobody dreamt in their wildest imagination that we would still tied to the wharf right now.

"Fishermen can't fish for those prices."

Malloy said a recent oversupply of the crustaceans means the market can only offer a certain price.

He said seafood processing plants have been feeling the pressure, with a number of people out of work for the last several days.

"It's a very limited time that they have as well to make enough money to feed their children," said Malloy. "None of us are happy with the situation.

"We're all in the same boat here."

He said fishermen were deciding on Sunday whether they would head out on the water Monday morning.

Meanwhile, Nova Scotia fishermen along the Northumberland Shore and around Cape Breton decided on Sunday that they would keep their boats tied up on Monday.

About 500 people attended an at-times heated meeting in Antigonish, with some fishermen "itchy" to get out on the water and others vying to stand firm and not fish, said Ronnie Heighton, president of the Northumberland Fisherman's Association.

"It was a good show of hands that we all stay at least one more day," said Heighton.

A meeting with fishermen, processors and Nova Scotia Fisheries Minister Sterling Belliveau was also arranged for Monday. After that, the fishermen will meet again to discuss their next move.

The protest had also spilled over into New Brunswick last week, where lobster fishermen tied up and also said it's not worth their while to steam out of port for a product that won't cover the cost of fuel, bait and labour.

McGeoghegan said he's not surprised by the sudden shift toward solidarity amongst the Maritime lobster fishermen.

He said the industry must bring in a third party to review the pricing system and make recommendations for changes.