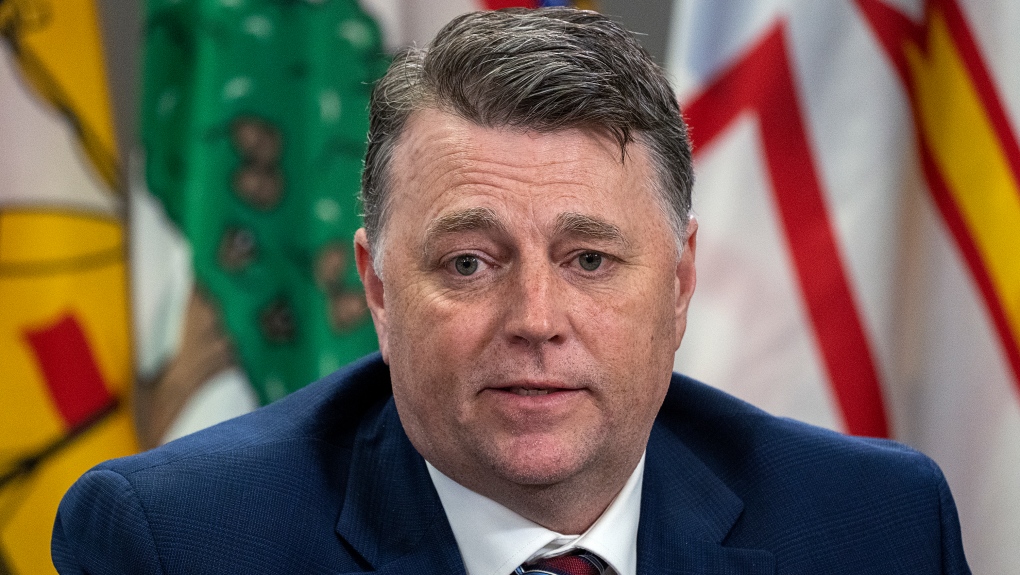 Prince Edward Island Premier Dennis King fields a question at a meeting of the Council of Atlantic Premiers in Halifax on Monday, March 21, 2022. (THE CANADIAN PRESS/Andrew Vaughan)

The premier of Prince Edward Island is condemning what he says was “an act of racism and hate” at a festival in the province’s Evangeline region over the weekend.

The statement comes after reports that an employee and a client of a group that helps French-speaking newcomers settle in the province were allegedly attacked at the Acadian Festival and Agricultural Exhibition.

“The news of the events that transpired in the Evangeline region this past weekend are deeply troubling and concerning,” said Premier Dennis King in the statement released Wednesday.

“This is not acceptable and will not be tolerated in our province.”

The RCMP has confirmed that officers responded to a disturbance outside the Evangeline Recreation Centre in Abram-Village, P.E.I., around 1:30 a.m. Saturday.

When officers arrived, they learned at least five people had been involved in an altercation in the parking lot.

Two men were taken to hospital with non-life-threatening injuries. They have since been released from hospital.

According to the Francophone integration cooperative (CIF), an employee and immigrant client were assaulted on the weekend. The group alleges the men were “physically and verbally attacked” after a dance Friday night.

In a statement, the CIF condemns what it says were “acts of racist violence.”

“These acts of violence do not reflect the heart of the community, and it is the entire community that rejects them,” said CIF President Yvonne Gallant.

“The people of the Evangeline area do not accept this kind of violence and racism.”

King echoed that sentiment, stating that the festival, which celebrates P.E.I.’s Acadian and Francophone community, has “been tarnished after an act of racism and hate.”

A Statement from Premier King on the events that occurred in the Evangeline region over the weekend: pic.twitter.com/aUuSFsMHpS

“No matter how you identify, who you love, who you worship, what color your skin is, where you are born, or what language you speak – everyone in this province has the right to celebrate who they are and who they desire to be,” said King.

“I’m calling on all Islanders to condemn any acts of violence and hate and speak out when these acts occur. Intolerance and discrimination have no place in our province.”

Meanwhile, police are urging anyone who witnessed the altercation, captured images or video of the incident, or has information that could help with the investigation, to contact the East Prince RCMP at 902-436-9300.

Police reveal identity of Philly's slain 'Boy in the Box'

Nearly 66 years after the battered body of a young boy was found stuffed inside a cardboard box, Philadelphia police say they have finally unlocked a central mystery in the city's most notorious cold case: The victim's identity.

Hope was in short supply just ten weeks ago on this 10-kilometre spit of sand at the end of the migration route for tens of thousands of Canadian snowbirds, Don Martin writes in an exclusive column for CTVNews.ca from Florida's Fort Myers Beach. But there are signs, he says, things may return to normal much faster than anyone expected.

The federal Liberal government has presented a new bill aimed at enshrining in law their commitment to the Canada-wide early learning and child-care system, and the long-term funding needed to maintain it. The minister responsible said the legislation is needed in-part to ensure that the nationwide system being can't easily be scrapped by a future federal government.