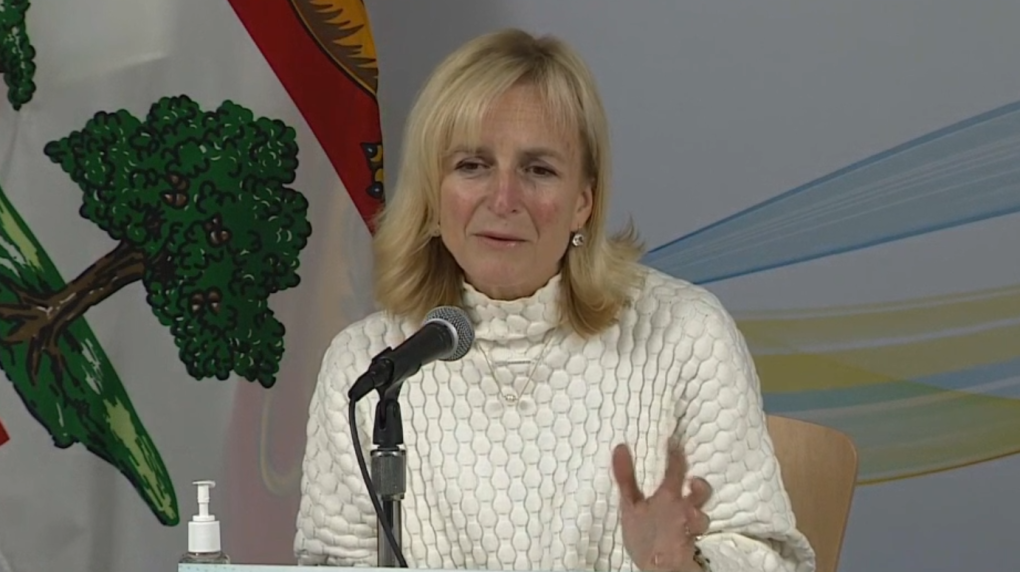 “I am pleased that there are no new cases to report today,” said P.E.I.’s chief medical officer of health, Dr. Heather Morrison, during a press conference on Sunday, followed by an update involving two previously announced cases.

“I am pleased that there are no new cases to report today,” said P.E.I.’s chief medical officer of health, Dr. Heather Morrison, during a press conference on Sunday, followed by an update involving two previously announced cases.

On Saturday, Morrison announced two unrelated cases involving males under the age of 20 – bringing the province’s total case count to 72 since the pandemic began and the number of active cases in the province to four.

Morrison noted just over 1,100 people were tested for COVID-19 within a 24-hour period, including individuals associated with the cases announced Saturday – all tests came back negative.

“Public health staff contacted 353 people by phone yesterday to advise them that they needed to be tested,” said Morrison. “The gold standard for contact tracing is for it to be completed within 24 hours of the identification of a case. Despite the large number of contacts in the situation, we definitely achieved this standard.”

“This has also provided the opportunity to review all operational plans to ensure that what we've learned from in the last 24 hours provides an opportunity to enhance the measures that are currently in place in schools and organize sport,” said Morrison.

Morrison also addressed the sharing of names on social media concerning COVID-19, noting public health does not release names of individuals with any communicable disease including COVID-19. She added legislation is in place to protect the rights of Islanders against the release of such information

“We are aware of the name of a person was released on social media yesterday. We do not condone the identification of anyone who may or may not have a communicable disease,” said Morrison. “A wonderful part of living in Prince Edward Island is the feeling of closeness and being connected to many social and family ties. While this sense of comfort and familiarity makes P.E.I. a very special place, it does not negate our right to privacy – especially when it comes to our personal health.”

Public Schools Branch acting director Norbert Carpenter also spoke during the press conference. Carpenter noted Charlottetown Rural High School will be open on Monday following a deep cleaning by a specialized cleaning service on Sunday at the school and school busses #23 and #3.

"At this point we unable to identify a single source of infection. However, it is very likely related to importation and travel outside of P.E.I. Public health will continue to investigate the situation and leave no stone unturned." said Morrison. "Our work over the next few days will be important to help determine if we are able to identify a firm linkage."

Canada has twice as many active COVID-19 cases as it did on Nov. 1

'These antics help no one': More than $47,000 in fines issued following house party in Mississauga, Ont.

PM put all vaccine 'eggs' in one basket, didn't consider other options: O'Toole

U.S. may see 'surge upon surge' of virus in weeks ahead, Fauci says

Conservatives attack Trudeau's 'reset' but they have ideas for their own

More than 91,000 people hospitalized with coronavirus in the U.S.

What happens if someone refuses vaccination? Ethicists urge clarity on COVID-19 rollout