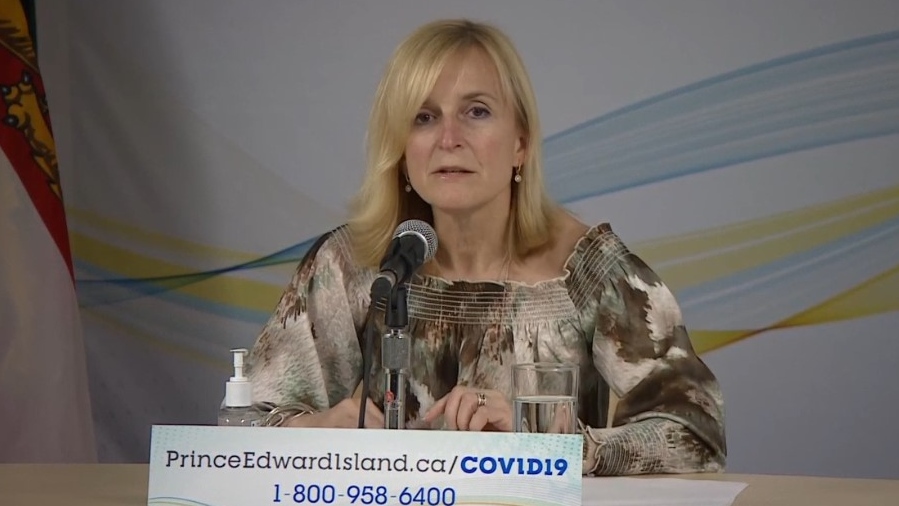 HALIFAX -- Prince Edward Island is reporting one new case of COVID-19 on Thursday, as health officials open vaccine appointments for adults age 40 to 49.

During a news update on Thursday, P.E.I.'s chief public health officer Dr. Heather Morrison said the case is related to travel outside of Atlantic Canada.

P.E.I. currently has 12 active cases of COVID-19. To date, the province has had 175 positive cases of the novel coronavirus.

Anyone who was on the following flight should self-monitor for symptoms of COVID-19, and visit a drop-in testing clinic if symptoms develop.

Beginning on Monday, health officials will open vaccine appointments for adults age 40 to 49.

Since it is a large age cohort, appointment bookings will be broken down into four groups based on birth month.

Those born between January and March can call and book appointments on April 27. Birthdays between April and June will be open on April 28. Those with birthdays July to September can call on April 29, and October to December birthdays can book on April 29.

Frontline workers age 16 to 39, who work with the public and cannot work virtually, are also now able to book an appointment to get vaccinated.

P.E.I. will be receiving more than double the amount of Pfizer doses they initially expected this spring.

Morrison said Thursday that the province will receive 47,430 extra doses of the Pfizer vaccine in May and June, and could see some appointments bumped up.

According to Morrison, P.E.I is on track to meet their target of herd immunity by the end of June.

With the increased Pfizer shipment, she expects the province will be able to offer everyone a booster shot no later than 12 weeks after their first dose.

“We continue to make good progress with our vaccine rollout, and our focus is to immunize as many Island residents as possible, as quickly and safely as possible,” said Morrison during Thursday’s update.

As of Tuesday, 46,278 doses of vaccine were administered, including 9,768 second doses.

According to Morrison, 27.4 per cent of adults over the age of 16 have included at least one dose, and 7.3 per cent have received two doses.

TRAVEL FROM OUTSIDE ATLANTIC CANADA SUSPENDED

The province announced Monday travellers from outside of Atlantic Canada will not be allowed to travel to P.E.I. for at least four weeks.

The travel restrictions include:

There are no changes for residents of Atlantic Canada, who will can travel to P.E.I. but must self-isolate for 14 days after arrival.

Other symptoms like nausea, vomiting, or diarrhea have been reported, but typically along with other COVID-19 symptoms, and may be seen more often in children.

COVID-19 variant of interest vs. variant of concern: What does it mean?

'We got it wrong': Doug Ford apologizes for some of Ontario's enhanced public health measures

How long does protection from COVID-19 vaccines last?

Ontario may have started to bend the COVID-19 curve, top doctor hints