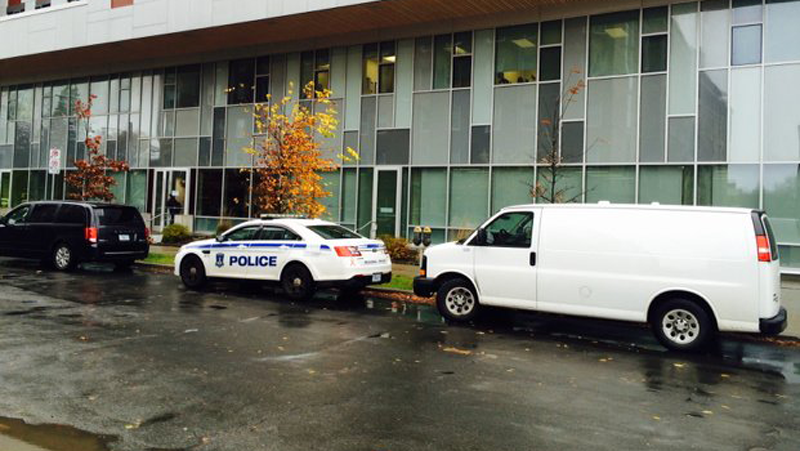 Halifax Regional Police respond to the sudden death of a 19-year-old woman at a Dalhousie University student residence.

HALIFAX -- The parents of a young Chinese woman who died of alcohol poisoning after a night of drinking inside a Dalhousie University residence are suing the school for alleged negligence.

In a statement of claim filed late last week, parents Peter Shang and Weihong Bai of China say they are also suing four other students and Halifax-based McKesson Canada Corp., the company that operates the province's medical help phone line, otherwise known as 811.

In a civil action filed Nov. 10 with the Nova Scotia Supreme Court, it is alleged that on the night of Nov. 12, 2015, 19-year-old Melody Shang drank vodka, became "visibly" intoxicated while she was in a Dalhousie-owned residence in Halifax known as LeMarchant Place.

"After she consumed the vodka, the roommates moved Melody to the apartment's bathroom, and left her lying on the bathroom floor for approximately two hours, during which time she vomited and fell unconscious," the lawsuit says.

The court documents say Shang was moved to a makeshift bed on the floor, where she remained unconscious and vomited again.

One of the apartment's four roommates called the province's telecare service to seek medical advice from an operator, who advised them to monitor the woman's breathing and call back if anything changed, the lawsuit says.

"Melody remained in a state of unconsciousness ... The roommates cleaned her vomit and left her," the statement says.

The next morning, the roommates called 911 when they realized Shang had stopped breathing. She was declared dead at the scene.

None of the allegations has been proven in court.

A spokeswoman for the university said Tuesday Dalhousie has not received notification of the lawsuit.

"We have not been served," Janet Bryson said in an email.

Shang's parents say Dalhousie was negligent because the institution failed to take steps to prevent drunkenness and adequately supervise its residents and guests.

The lawsuit says that as the owner of LeMarchant Place, the university owed Shang a duty of care to ensure she was reasonably safe while on its premises.

"Dalhousie failed to appropriately or sufficiently implement or enforce its polices to prevent over-consumption of alcohol and ensure guest and student safety on its property."

The statement alleges the roommates were negligent because they failed to prevent her from drinking too much, and then failed to seek adequate advice about protecting her health once she was intoxicated.

"They failed to provide the (811) operator with sufficient information to allow for the provision of adequate advice regarding Melody's health," the document says. "They failed to adequately act upon advice given by the operator."

As for the operator, the lawsuit alleges he or she failed to make sufficient inquiries to determine the status of Shang's health, and then failed to provide adequate advice about medical treatment.

McKesson Canada was vicariously liable for failing to properly train and supervise the operator, the suit alleges.