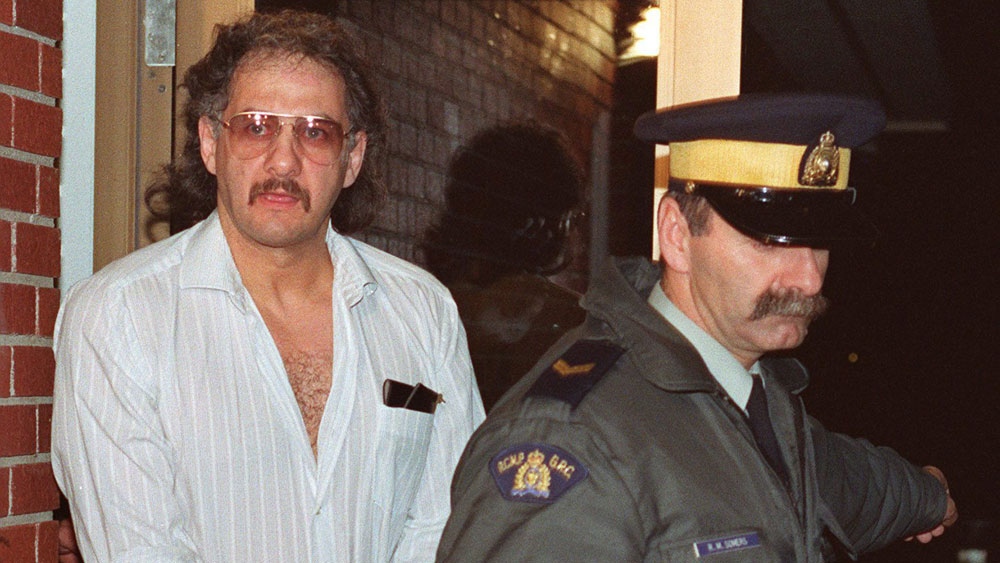 Allan Legere departs from court in Burton, N.B. as he waits for jurors in his murder trial to return a verdict on Nov. 2, 1991. (The Canadian Press/Andrew Vaughan)

HALIFAX -- Allan Legere plotted a fresh escape the year he was convicted of a series of brutal killings that had created panic in Miramichi, N.B., according to a written decision denying him parole.

The eight-page decision, which follows a Jan. 13 Parole Board hearing, also said that in May 2019, a weapon was found inside the television in his cell at the maximum security Edmonton Institution.

The written decision reiterates the board's firm refusal of any form of parole for the 72-year-old inmate, noting Legere's failure to accept responsibility for his violence and his suggestion victims' families forgive him and "move on."

The decision also contains new details of an escape attempt not widely known in the past.

The convicted murderer, rapist and arsonist famously escaped from custody on May 3, 1989, while serving a life sentence for the murder of store owner John Glendenning during a 1986 robbery.

He then terrorized in the Miramichi area as he carried out four more brutal murders, several arsons and a sexual assault before being recaptured on Nov. 24, 1989.

Yet, even when he was imprisoned at the maximum security Atlantic Institution following his 1991 conviction, Legere appeared to keep plotting how he could get away.

"According to file information, you have a history of attempting to, and being successful in, escaping from custody," the decision read. "In 1987 you attempted to escape twice, in 1989 you did escape, and in 1991 you attempted once again to escape.

"In regards to the 1991 attempt, file information relays that your plan to escape custody included an intention of taking a female staff hostage."

Legere was convicted of the murders on Nov. 3, 1991 after DNA evidence confirmed his presence at the murder scenes.

John Harris, a former Correctional Service Canada manager at the Atlantic Institution, said during a telephone interview that he recalled the 1991 escape attempt, which intelligence officers at the facility documented.

He said it fit a pattern of past behaviour.

"When that information (of the escape plan) started to come up and it started to get a little intense, that's when the decision was made to have him transferred to the super maximum unit (near Montreal)," Harris recalled.

The 77-year-old retired correctional officer said Legere's plan was "kept under wraps but it was put on the file to justify the transfer."

"We had to caution some of the female staff members.... We weren't sure what woman it was, but we had an indication it was a female correctional officer."

During his parole hearing last week, Legere didn't accept responsibility for the beating deaths, saying others committed them, and he blamed alcohol for his actions in tying up and sexually assaulting a woman.

He said several times he didn't expect parole but would like a chance to pursue programs for his rehabilitation at a medium security prison.

Harris urges the board and the federal correctional service to remain vigilant, as he said he believes that Legere will still plan an escape, despite his denials of such an intention during the hearing.

"It won't be an escape as we think of it. He's planning to get to minimum security where you can just walk away," said Harris.

During his hearing, Legere made a number of remarks critical of Rick MacLean, the former editor of the Miramichi Leader who documented the murderer's violence in the weekly newspaper and in two books he co-authored.

MacLean said in an interview that he finds it frightening to imagine what Legere might have done had he managed to escape again in 1991.

"It would have been horrifying for me and my family," he said.

The parole board's decision, released Monday night, said that after his 2015 transfer to Western Canada, Legere's behaviour continued to be "problematic," though it said his violence decreased and he managed at times to successfully participate in institutional employment programs.

Legere, however, continued to develop fixations on female staff members and to behave inappropriately around them, the report said.

Harris said this also fits a pattern of past practice of Legere using the television for improper purposes. In 1989, guards failed to detect a television antenna Legere had hidden in his rectum, and he used it during his escape after being taken out of the prison for a medical appointment.