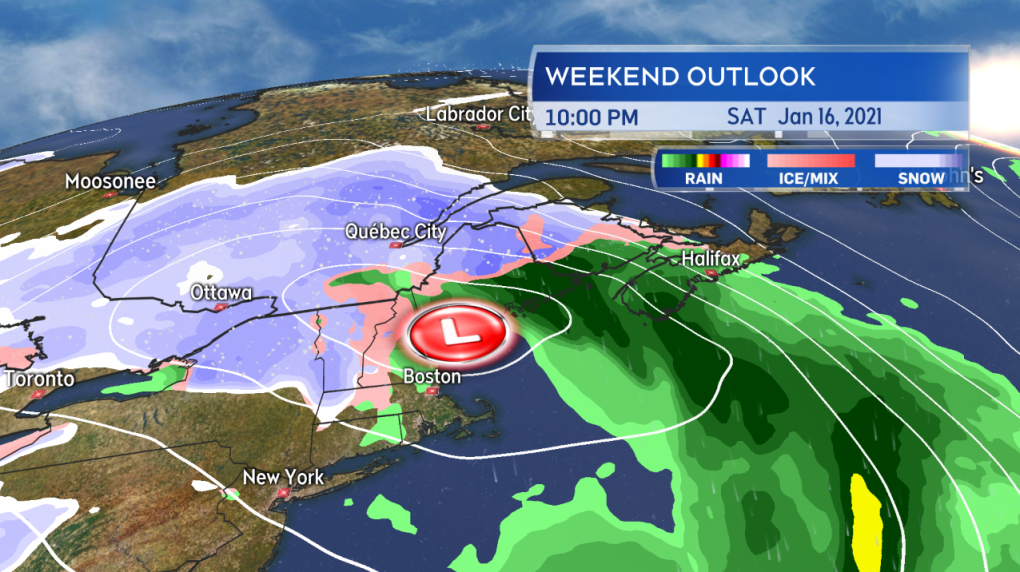 A strong coastal storm will move into Maine and then northern New Brunswick late Saturday into Sunday bringing the Maritimes snow, rain, and high winds.

HALIFAX -- Parts of the Maritimes can expect to see heavy snow and rain and high winds this weekend, as a rapidly strengthening low-pressure system moves up from the northeastern United States into Atlantic Canada.

The storm will impact the Maritime region mainly late Saturday and Sunday morning. 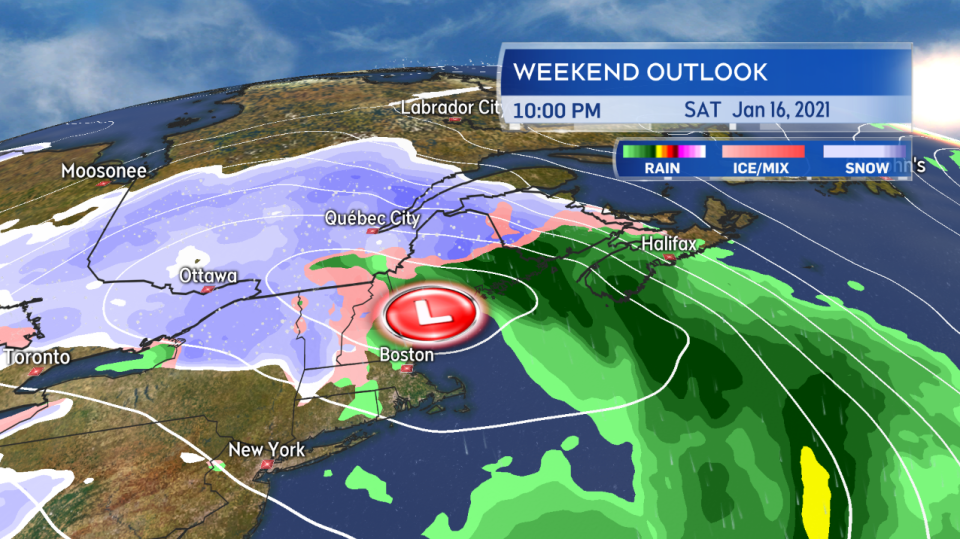 A strong coastal storm will move into Maine and then northern New Brunswick late Saturday into Sunday bringing the Maritimes snow, rain, and high winds.

The bulk of the accumulating snow and ice is expected across northern New Brunswick and in some of the higher terrain just to the north of Fredericton. A mix of snow and ice pellets for those areas is likely to accumulate 15 to 25 cm.

Areas around Bathurst and the Acadian Peninsula could finish with as much as 25 to 40 cm of snow.

While the snow is forecast to be much lower Fredericton and south, ice pellets and freezing rain could lead to slushy and slick surfaces even with rain expected to mix in.

There is also some indication that the Cape Breton Highlands could pick up snow exceeding 10 cm as well. 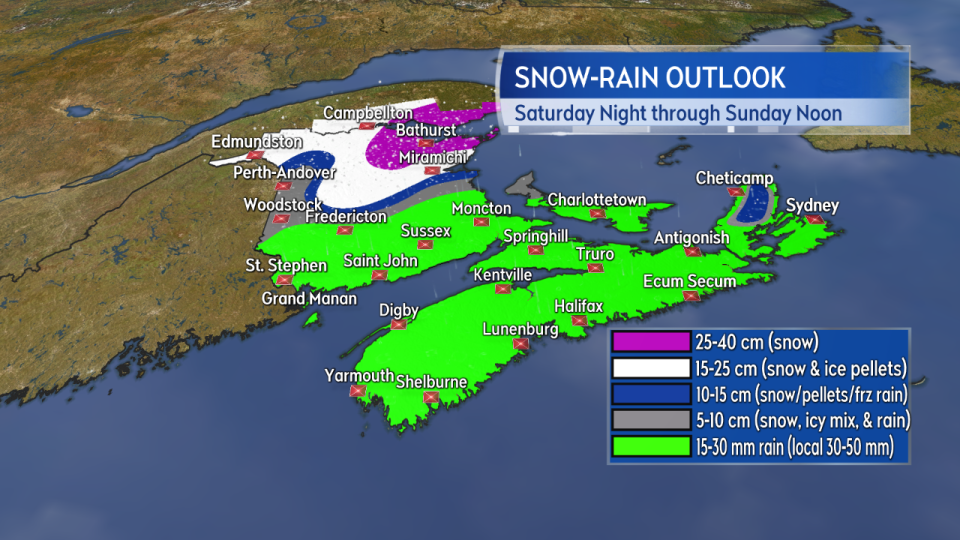 Higher snowfall amounts are expected for northern areas of New Brunswick. Amounts taper lower into central New Brunswick with more ice pellets and freezing rain mixing in. Much of the rest of the Maritimes can expect mainly rain.

For much of the rest of the Maritimes the system is forecast to bring mainly rain. Widespread totals of 15 to 30 mm are expected.

Local amounts could reach 30 to 50 mm for coastal areas of the Bay of Fundy coastline in N.B. and the Atlantic coastline of N.S.

Despite milder temperatures through the first part of winter, the ground is still frozen for most areas. This increases rain runoff and ponding water should be watched for.

High and gusty east to southeast winds will build in with the precipitation. Coastal gusts could peak as high as 70 to 100 km/h with widespread inland gusts of 40 to 70 km/h. The stronger winds will reach the southwest of New Brunswick and Nova Scotia by Saturday evening. 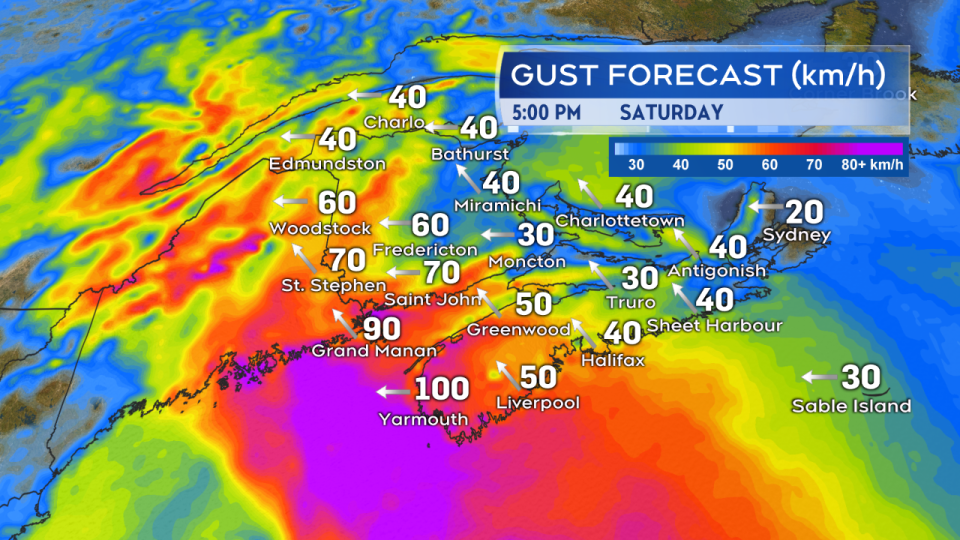 Inverness County, N.S. will likely hit peak gusts in excess of 110 km/h due to enhancement over the Cape Breton Highlands. Those strong winds should be watched for Sunday morning.

The wind will turn southwest through Sunday with gusts 40 to 70 km/h into the evening followed by some easing into Monday. 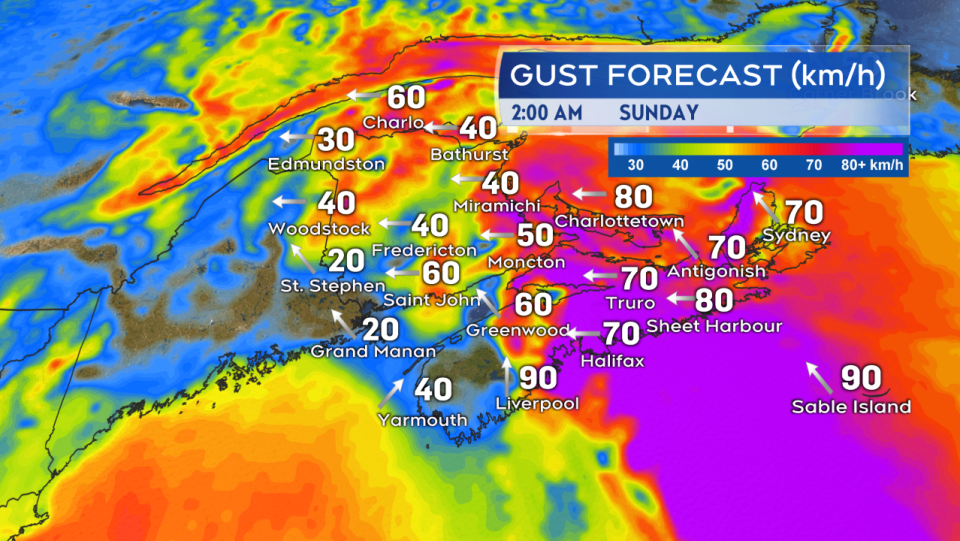 The strong wind builds up the Atlantic coastline of Nova Scotia into P.E.I. and Cape Breton by early Sunday morning.

The strong winds will also impact marine areas of the region. A southeast wind of 35 to 45 knots is forecast to develop for N.S. slopes, banks, and near coastal districts Saturday afternoon and evening with gale warnings issued.

The gale force winds would then progress northeastward with the storm into Sunday. A turn to southwest winds is forecast on Sunday easing slightly into a range of 25 to 35 knots.

Seas building three to six metres are also indicated to accompany the strengthening winds. The high sea state may persist well into Sunday in the wake of the passing storm.

Interests that plan to be active in marine areas this weekend should consult a more detailed marine forecast covering the area of planned operation. 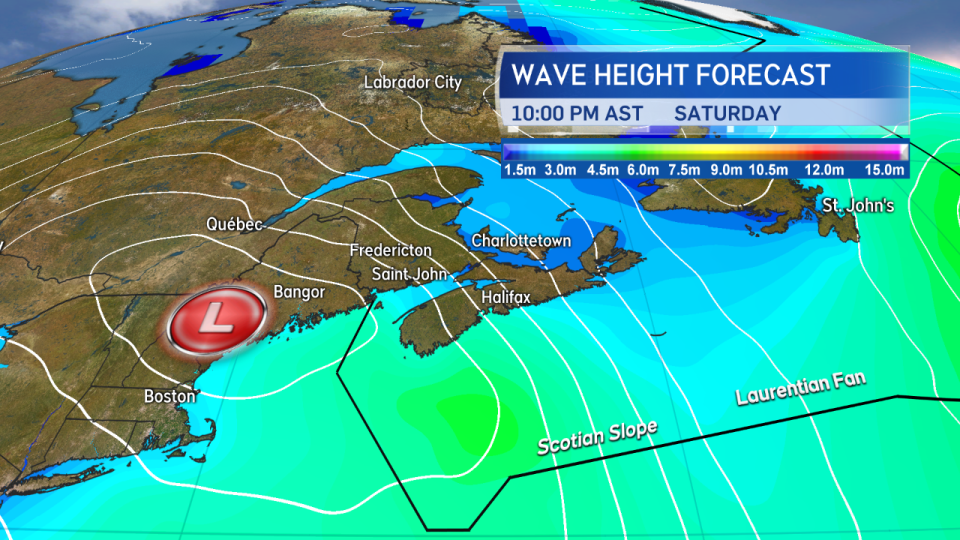 Gale force winds and high seas are expected to develop for many of the marine areas around the Maritimes Saturday afternoon into Sunday.