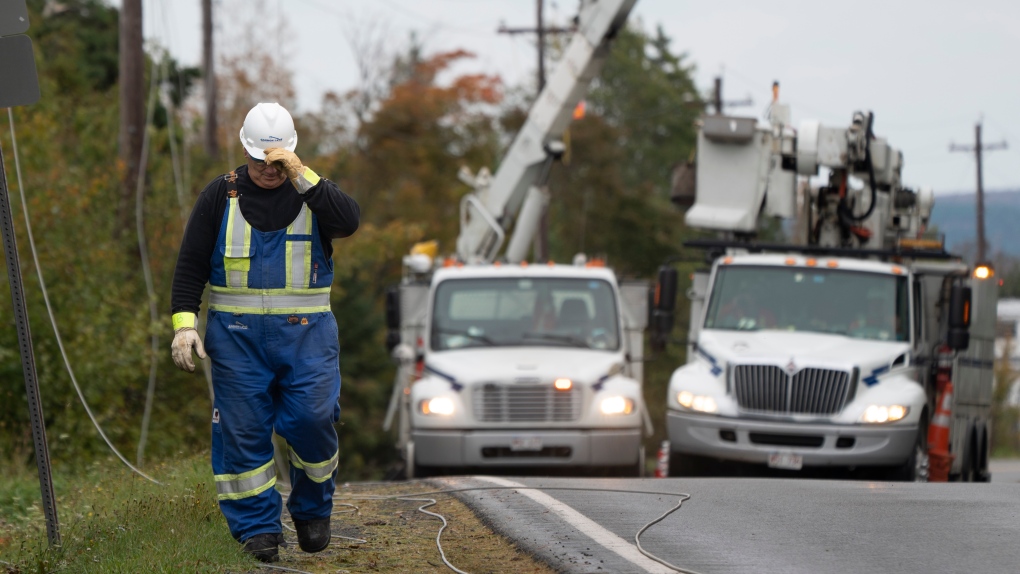 "Most of Nova Scotia has the expectation that if the wind blows sideways, there's a potential to lose power," Amanda Dodsworth said in an interview Wednesday, as she spent a fourth morning in the dark.

She said in her neighbourhood 10 kilometres from the centre of Halifax, post-tropical storm Fiona landed with less ferocity than in northeastern Nova Scotia and Cape Breton, taking down branches rather than toppling large trees and snapping poles.

"There's a lot of damage where you can't figure out why it's taking so long to fix," Dodsworth said. "I think some of the issue is there's a lack of general maintenance of the lines and poles and things."

Meanwhile, Halifax Regional Municipality councillor Sam Austin said he has had a steady stream of emails from residents of Dartmouth Centre struggling to understand why the apparently limited damage has kept power out for close to a week, when damage from hurricane Juan in 2003 seemed far worse.

"We're going to have start hardening our infrastructure, especially our electrical systems because doing things the same old way we've been doing it isn't going to cut it any more."

During a briefing on Wednesday afternoon, Matt Drover, who is managing Nova Scotia Power's response to Fiona, said the privately owned utility was coping with thousands of broken lines and hundreds of damaged poles. About 415,000 customers lost power during Fiona, and the utility said that as of Wednesday, the lights were back on for more than three quarters of those.

However, in recent years the utility has repeatedly come in for criticism, receiving a fine of $250,000 from its regulator in 2020 for failing to meet reliability standards, including standards for the frequency and length of power outages.

Drover said the utility, which is owned by Halifax-based Emera, has been making progress in strengthening its network. "What we focus on is tree trimming. We spend over $20 million (annually) on vegetation management throughout the province ... that is the best thing we can do to prevent power outages going forward," he said Wednesday.

He also said while some residents may see just a few branches down, it's possible the cause of the outage is a much larger tree that has fallen "further up the line."

Kevin Mullen, the chief executive of a Halifax-based renewable energy firm -- GreenQuest Power -- said he believes the oversight model for Nova Scotia Power has to change to give the regulator the ability to impose stronger penalties if reliability standards aren't met.

"The only way to solve the problem is to force Nova Scotia Power to be accountable .... You have to say, 'This fine is going to be more of a cost to you than non-performance.' When you bring it to that point, the company will start to turn around," he said in an interview Wednesday.

He said there are is a lot of "low-hanging fruit" available for improvements, including burying lines, increased tree trimming and upgrading transformers.

In Prince Edward Island, 90 per cent of customers were without power at the height of the storm on Saturday. Maritime Electric -- a subsidiary of Fortis Inc. -- reported Thursday morning that about half those outages, or 41,000 customers, had seen their power restored.

Terry Gamble, who owns a cottage in Canoe Cove, P.E.I., said Wednesday her community had been without electricity since the post-tropical storm struck late Friday.

She said she is one of the lucky ones because she also owns a condo in Charlottetown, which is on the hospital grid and had power restored within 48 hours.

However, rural areas have no streetlights leaving residents in pitch darkness and without heat as the days get shorter and chillier, she said.

"It is very frustrating," she said. "I mean, we are going back ... into the 1800s." Gamble said there is a lot of talk about burying power lines to prevent such widespread blackouts.

"It would be at an enormous cost. But then you I guess you have to weigh it (against other costs). I guess it all comes down to what we as individuals are prepared to invest in the moment, or potential in the future," she said.

Kim Griffin, a spokeswoman for Maritime Electric, maintains that the grid held up well overall. "The fact is we build to Canadian standards," she said at a briefing Wednesday.

She also said the utility is working on a study assessing the impacts of climate change in the coming decades that will be released later this year, and more planning on infrastructure will occur after that is complete.

"It's not something you can go and invest in your system overnight," she said.

CTVNews.ca speaks with victims of stalking and harassment, and with advocates and legal experts who are calling on Canada to overhaul how it handles these cases from the police, to courts, and to the communities we live in.

Despite U.S. President Joe Biden's attempts to link WNBA star Brittney Griner's case to that of Paul Whelan, a former U.S. Marine arrested on espionage charges in 2018 and sentenced to 16 years in prison two years later, it became plain that Russian President Vladimir Putin would not budge.

A landfill north of Winnipeg where the remains of two victims of an alleged serial killer are believed to be located will pause operations.

Canadians sending parcels this holiday season may be surprised to see a steep surcharge on domestic shipping due to the high price of diesel.

From missing family time to making food, Canadians are cutting back amid inflation

Decades-high inflation and soaring interest rates have led many to take a closer look at their spending habits and, consequently, make some tough choices.

The head of NATO expressed worry that the fighting in Ukraine could spin out of control and become a war between Russia and NATO, according to an interview released Friday.

Canadian tourists may not be able to claim trip cancellations to Jamaica amid violence on island, travel expert warns

Despite Jamaica’s prime minister recently declaring a widespread state of emergency following a surge in gang violence and murder on the island, a travel expert warns that Canadian travellers may not be granted cancellation claims for travel insurance policies.