Pedestrian-only downtown a hit with residents as St. John's adapts to pandemic 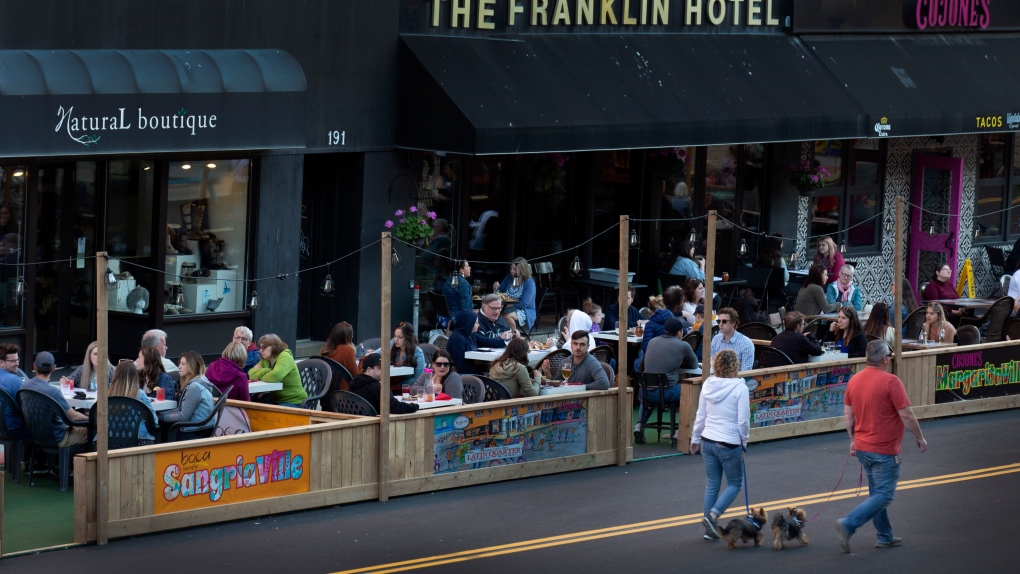 The Pedestrian Mall on Water Street in St. John’s is shown on Wednesday, July 8, 2020. A section of the historical downtown street is now closed to vehicular traffic from noon to 10 pm daily until September 2020. The Pedestrian Mall was approved to allow Water Street venues to expand into the street and provide social distancing. THE CANADIAN PRESS/Paul Daly

Friends waved to each other across Water Street and approached newly built patio decks to chat, as residents of Newfoundland and Labrador's capital basked in the product of a long-discussed vision that's been fast-tracked by city officials during the pandemic: a pedestrian-only downtown.

"The city really got this right this time. We're very happy," Dick Barter, co-owner of Green Door restaurant, said while working on his establishment's patio.

Barter, like other business owners on the colourful downtown strip, said he's advocated for closing the street to cars for years.

Less than a week after the July 3 launch, Barter said he's noticed an increase in business and his customers seem happy to be outside sharing a drink and a meal after staying home for months under restrictions meant to beat back the spread of COVID-19.

With one active case of the illness reported in the province, many restrictions on daily life have been lifted, and in June the capital city green-lit the pedestrian mall on Water Street to support struggling businesses reopening with new limits on capacity.

The experiment will run from July 3 until Sept. 7, closing four blocks of Water Street from noon to 10 p.m. each day, with picnic tables and other seating installed along the route.

Barter noted that businesses had just a few weeks to complete paperwork for their outdoor expansions, but he said the result has been worth it.

Water Street is one example of how cities are making quick changes to support businesses and cooped-up city dwellers in a physically-distanced world where outdoor public space is at a premium.

Cities around the world have introduced similar experiments since the pandemic began, closing some streets to cars and hastily expanding cycling routes, as Toronto mayor John Tory pledged to do in May.

In St. John's, many hope the transformation on Water Street will become an annual fixture -- including Liberal Finance Minister Tom Osborne, who has predicted tough times ahead for the province's already troubled economy.

Osborne had a front row seat to the new Water Street during his outdoor meal at The Merchant Tavern Wednesday. "It's nice to see the economy start to take shape again," he said.

Osborne said he's happy with the outcome that he said resembles the bustling outdoor dining spaces he's admired in other Atlantic Canadian cities that rely heavily on tourist dollars in the summer.

"I hope it lives beyond this year because it does bring more people downtown and it's not only good for the hospitality industry but some of the shops down here may benefit as well," he said.

Osborne wasn't the only familiar face on the street Wednesday. Musician Alan Doyle of Great Big Sea fame was impressed by the turnout as he wandered to find a seat. "It's fantastic, I'm glad to be down here," Doyle said. "I can't believe this is the first year it happened in my lifetime."

A handful of people were wearing face masks but most had their faces uncovered, including waiters at a number of the busy restaurants. People recognized friends and talked standing close together, but for the most part people appeared to stick to their social groups.

Kelly Whittle spent the evening on Water Street with two girlfriends. The group said it was exciting to see the downtown changed into a vacation-like destination with enough room to safely spread out.

Although it's been lauded as a success by residents and politicians, the modifications to Water Street are still being tweaked after some pointed out the changes didn't consider the needs of residents with reduced mobility.

In Facebook post shared widely this week, Lisa Walters posted 48 photos of herself outside downtown spaces she was unable to enter in her wheelchair. She wrote that the new patios and tables on the street made it more challenging for her to navigate the space.

"The glaringly obvious thing to me was how sad it was that so many businesses could build these elaborate patios overnight, and still not have small wheelchair ramps into their stores or restaurants," Walters wrote.

Mayor Danny Breen was one of the many people who commented on Walters' post, saying city staff would review the issues she raised. Walters said in a Facebook message that a subsequent conversation with the mayor left her "hopeful that some changes will actually be made."

A Friday news release from the city acknowledged room for accessibility improvements, and discussed a plan to develop a program to install ramps. "It is important to recognize that this is just the beginning," Breen's statement said.