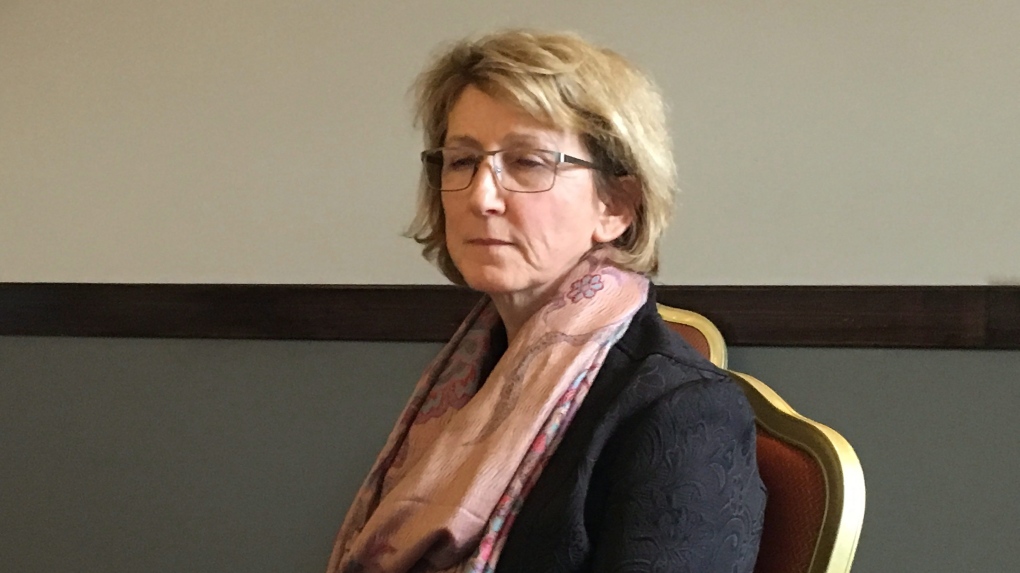 Jo-Anne Pushie, a social worker who used to work at the Nova Scotia Hospital, testified Tuesday, Feb.20, 2018 at a human rights inquiry in Halifax. (THE CANADIAN PRESS/Michael Tutton)

HALIFAX -- A rare look at the documented efforts of people with disabilities to leave a psychiatric hospital emerged Tuesday in Nova Scotia, with stories of beatings and deepening frustration as the years of awaiting release drifted by.

The inquiry is considering whether 46-year-old Beth MacLean and 45-year-old Joseph Delaney should be permitted to move from the hospital-like settings into small homes where assistance is provided for meals, mental health and other care.

The complaint also included the story of Sheila Livingstone, a woman in her late 60s who died after being transferred to a facility in Yarmouth -- 300 kilometres from her family -- more than a decade after being placed at the Nova Scotia Hospital in Halifax.

The inquiry heard details of the stories of MacLean, Livingstone and Delaney on Tuesday from their former social worker, Jo-Anne Pushie, who read from the hundreds of pages of internal reports being released through the hearings.

Pushie recalled Livingstone as a woman with an intellectual disability who also had a major mental illness, and said Livingstone had slowed down and become vulnerable as she aged.

She testified Livingstone's mother had pressed for her daughter's placement in a small options home since 2004, after doctors indicated her psychiatric conditions had stabilized.

Pushie told the inquiry that Livingstone agreed to move to a Yarmouth facility because she was repeatedly struck by other residents.

She read from medical notes that said in 2014 Livingstone was found with black eyes and bruises as her health declined.

"(A staff person) notified me that five times Sheila had been struck ... staff would try and place her in a safe place, and in room, but it was difficult given the mix of patients and the complexity of the people on the unit," she recalled.

The testimony also described MacLean's 15-year-long saga of attempting to leave the hospital after psychiatrists decreed there were no longer medical reasons for her to remain.

According to the original complaint, MacLean was admitted to the Halifax hospital in October 2000 after she assaulted a staff person while living at the Kings Regional Rehabilitation Centre in the Annapolis Valley.

The written complaint says the outburst was due in part to her frustration with having been at Kings since 1986 -- despite requests to live with supports in the community.

As part of her evidence, Pushie read reports saying there was an agreement that after one year the Department of Community Services would find a suitable placement for MacLean.

Memo after memo came from social workers, staff and senior doctors at the hospital telling the Department of Community Services that MacLean no longer needed to be an acute care psychiatric hospital with locked doors and strict controls on her life.

A March 20, 2002 letter from the facility said "it was agreed this arrangement would last for 12 months and the Department of Community Services would find an alternate placement at that time."

"The individual has utilized a tertiary, in-patient psychiatric bed for 16 months when she does not have a psychiatric illness."

As time passed, the memos described MacLean's growing senses of anger as she told social workers at the hospital she longed to be in smaller home with supports.

"She's been continuously asking for her discharge," wrote a social worker assessing the case.

As the conflicting messages came to MacLean that her condition had improved, yet she couldn't leave, staff memos document how she became more upset.

"Her level of frustration is increasing ... as there is no placement and no particular plan about finding her accommodation," said a 2003 memo.

Delaney is still at the Nova Scotia Hospital's Emerald Hall, while MacLean was moved to a transition facility in Halifax about two years ago after she launched her human rights complaint.

In her testimony, Pushie described Delaney as someone who had successfully worked at an adult workshop, and said he had, at times, lived in the community with supports.

She said he wasn't able to speak, but was capable of understanding and of giving her hugs.

He needed help with personal care and meals, she said.

Pushie said Delaney had also received the green light to live in the community with suitable support, but was unable to do so due to a lack of housing options.

A Department of Community Services spokesperson has said the department is working to improve its Disability Support Program and to create more small-options homes.

Heather Fairbairn wrote in an email that a new program called Flex Independent "will continue over time, as we are able to move people safely and ensure that the community-based supports are in place."

"Government is investing $4.2 million to develop eight small option, community-based homes over the next two years. This will bring the number of small option homes across the province from 222 to 230," she wrote.

The inquiry is expected to continue into Wednesday, before it takes a break and resumes the following week.