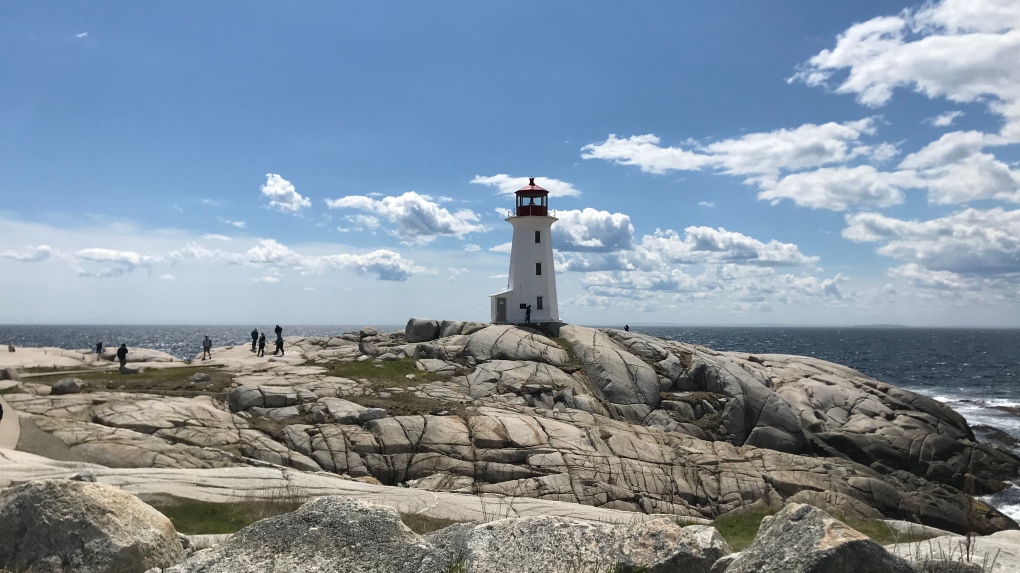 Nova Scotia's picturesque Peggy's Cove is seen on May 17, 2020. The iconic lighthouse is a popular tourism destination. (Andrea Jerrett/CTV Atlantic)

HALIFAX -- Easily one of Canada's most recognizable landmarks, the rugged point of land surrounding the postcard-perfect lighthouse at Peggy's Cove, N.S., will be getting a much-needed facelift this summer.

Plans were unveiled Friday to build a large viewing platform to improve access to the site and, at times, prevent people from venturing onto the rocks when storms roll in. The wood and concrete structure will include steel guardrails knitted together to look like fishing nets.

"We look forward to safely welcoming visitors again soon. In the meantime, we know there is a need to maintain and enhance our tourism icons."

The $3.1-million deck -- the province is contributing $1.7 million and Ottawa is kicking in the rest -- is expected to built by the end of June.

In 2018, the red-and-white lighthouse and nearby fishing village attracted more than 700,000 visitors. Provincial officials say one in three tourists who visit Nova Scotia make a point of heading to the lighthouse -- one of the world's most-photographed lightstations.

A 40-minute drive southwest of Halifax, the community of Peggy's Cove -- population 40 -- remains an authentic fishing village, despite the annual onslaught of tourists.

"The popularity of Peggy's Cove has created challenges in the community around pedestrian safety, traffic congestion and accessibility, all negatively impacting the experience for visitors and residents alike," Metlege Diab said.

"It's crucial that we take this opportunity to address these challenges."

As a key access point to the site, the new platform will be used to deter thrill-seeking gawkers from getting too close to the ocean when the weather turns foul and big waves start crashing into the cove's large, bald rocks.

Visitors, however, will be free to roam the shoreline when weather permits.

"Part of the experience of Peggy's Cove is being on those rocks," Peter Bigelow, vice-president of planning and development at Develop Nova Scotia, said Friday. "We are not going to limit that when it is safe."

The smooth granite under and around the lighthouse turns black and gets slippery when the ocean surf starts heaving salt spray into the air. Rogue waves have been known to sweep onlookers into the cold, turbulent waves.

The two incidents prompted a wave of commentary on social media, much of it was abuse hurled at people from outside the province unfamiliar with the fickle moods of the sea. The province responded by installing more warning signs.

One of the older signs embedded in the rock warns, "Injury and death have rewarded careless sightseers here. The ocean and rocks are treacherous. Savour the sea from a distance."

Architect Omar Gandhi said the fully accessible platform and its cantilevered look-off will be the preferred location for prudent travellers.

"The new viewing platform keeps people above the height of the waves," he said. "The lookoff provides the experience of being out on the rocks and near the water, but in a controlled and contained manner."

The 14,000-square-foot platform will sit on an existing road and parking lot in front of the Sou'Wester gift shop and restaurant. The parking lot will be replaced by a drop-off area at the rear of the building, improving the view.

The project is part of a $6.2-million plan aimed at improving safety, traffic flow and community sustainability. The site will also get new public washrooms and improved trail connections to the lighthouse and parking lot.

This report by The Canadian Press was first published Jan. 15, 2021.