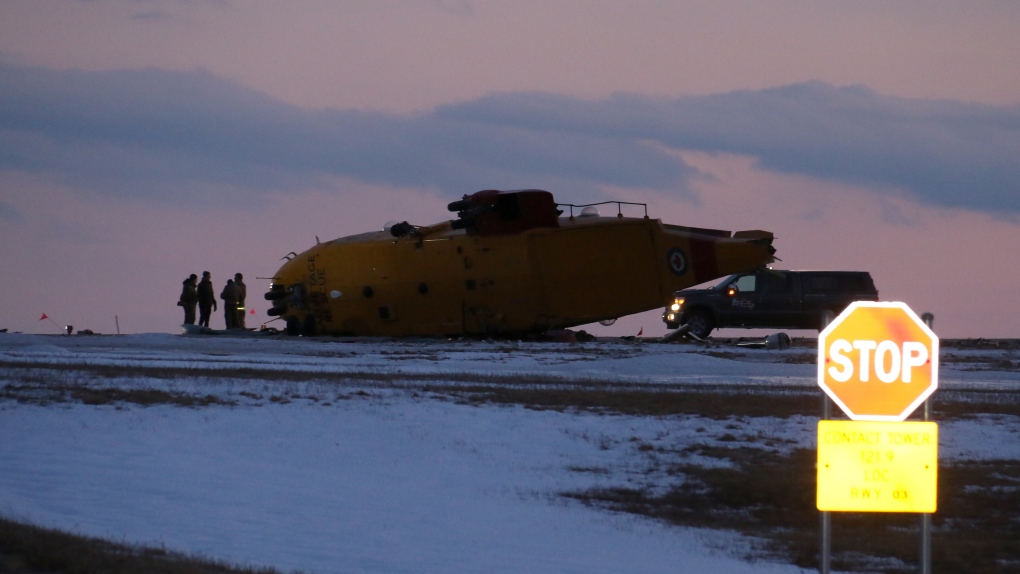 An investigation by the Royal Canadian Air Force says a military helicopter crash in central Newfoundland last month was set off by a problem with a pilot seat.

The crash at the 9 Wing Gander airbase caused serious damage to the CH-149 Cormorant and left two of six crew members with serious injuries, said a report released Wednesday about the crash.

The airbase is located at the Gander International Airport, about 335 kilometres west of St. John's, N.L.

The investigator's report said the pilot seat "unexpectedly descended to its lowest position" as the crew were conducting hovering manoeuvres during a training mission on March 10. The aircraft then spun in a counter-clockwise direction and dipped to its right side.

Its main rotors, right outboard wheel and back tail stabilizer then slammed against the runway.

"The aircraft impact with the ground caused very serious damage," the report said, adding that the impact occurred at 3:43 p.m. local time.

Pictures accompanying the report show the helicopter lying on its side with its tail ripped off. There are no rotor blades attached to the aircraft.

The report said two crew members were seriously injured and three others suffered minor injuries. The air force had said four of the military members on board the helicopter were taken to hospital after the crash and one remained in care the morning after the crash.

The investigator noted the crash did not cause a fire.

CH-149 Cormorant helicopters are long-range aircraft that can operate in severe conditions, according to the air force's website. The aircraft's frame is nearly 23 metres long, and its rotor span is 18.5 metres.

This report by The Canadian Press was first published April 6, 2022.

Canadian Forces veteran James Topp marched through Ottawa on Thursday on the final leg of his cross-country march, and was joined by Conservative Party leader Pierre Poilievre for part of the walk.

The Conservative Party of Canada says approximately 675,000 members will be eligible to vote in this year's leadership race.

More than a month after Canada reported a shortage of baby formula for allergic infants, Health Canada says supplies will continue to be limited during the summer even with new shipments on the horizon.

Animal rescue groups are criticizing a new policy by the Canadian Food Inspection Agency that will ban the import of dogs from more than 100 countries.

An emergency room physician in Toronto is warning that COVID-19 variants will continue to 'mutate endlessly' as the Omicron subvariants BA.4 and BA.5 are poised to become the dominant strains of the virus.