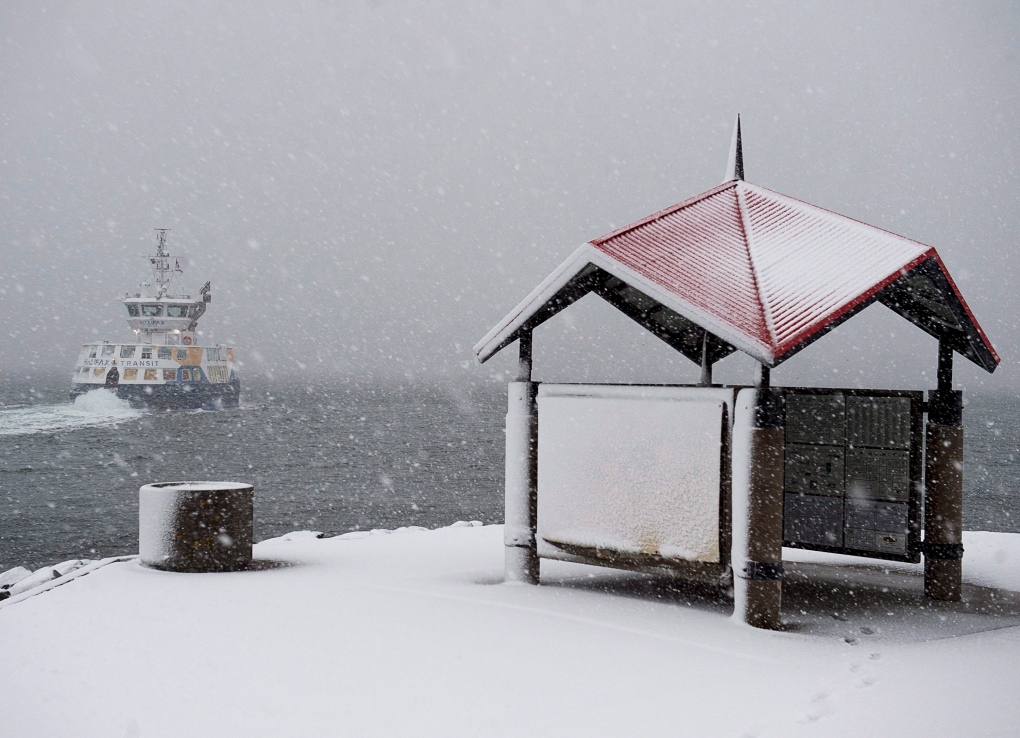 The Craig Blake, a passenger ferry, crosses Halifax harbour in a snow squall from Dartmouth, N.S. on Tuesday, March 13, 2018. (THE CANADIAN PRESS/Andrew Vaughan)

The front marks the boundary of some polar-sourced air and will bring about wind chill and some ocean-generated flurries and snow squalls Wednesday into Thursday.

Wind chill on Wednesday morning will make it feel several degrees below freezing and even into the minus double digits for parts of New Brunswick. Blustery northwest winds blow through the day so even the afternoon temperatures will have a bit of a bite to them. It's a repeat for Thursday with temperatures moderating slightly on Friday.

While the wind chill is not extreme for this time of the year, and comes with no increased risk of frostbite, warmer outdoor wear is likely to be needed the next few days. 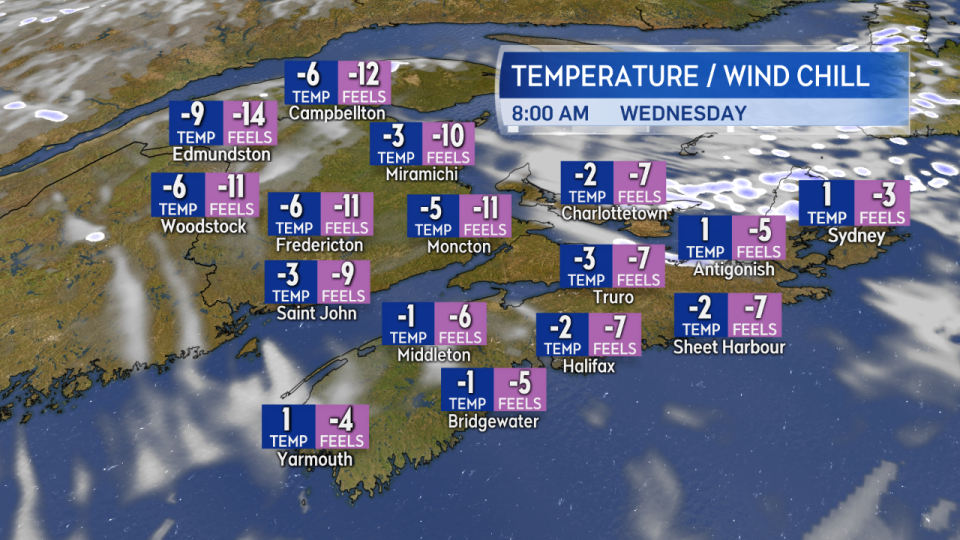 Temperatures and wind chill (feels like) for Wednesday morning. 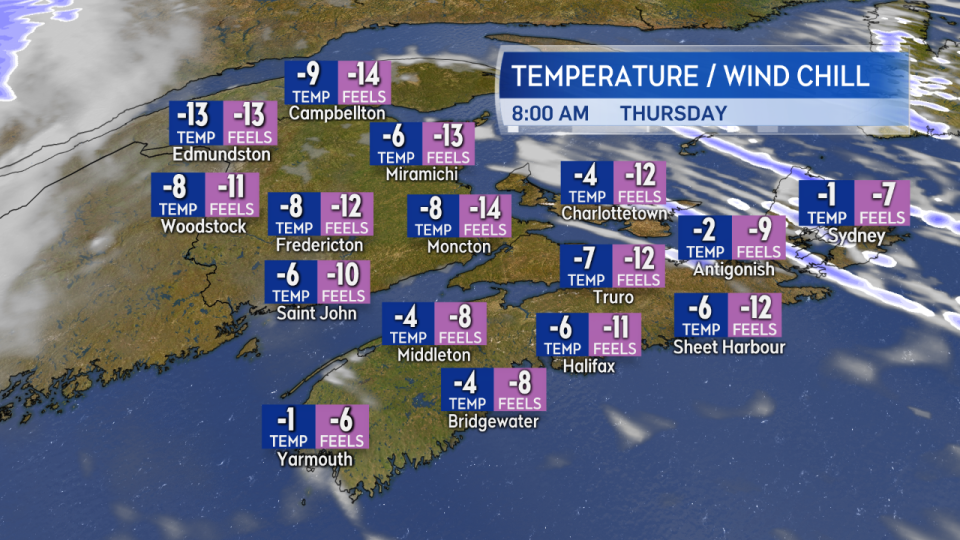 Temperatures and wind chill (feels like) for Thursday morning.

As the cold northwest wind blows over the ocean waters of the Gulf of St. Lawrence and Northumberland Strait, onshore flurries and snow squalls will be generated. The areas at greatest risk of seeing those conditions include Kings and Queens counties in P.E.I., Pictou/Antigonish/Guysborough/Cape Bretonin Nova Scotia, and a lower chance for near-coastal areas of Digby/Yarmouth/Shelburne counties in Nova Scotia.

It looks likely the flurry/snow-squall activity will increase Wednesday evening through Thursday morning before diminishing Thursday afternoon and evening. 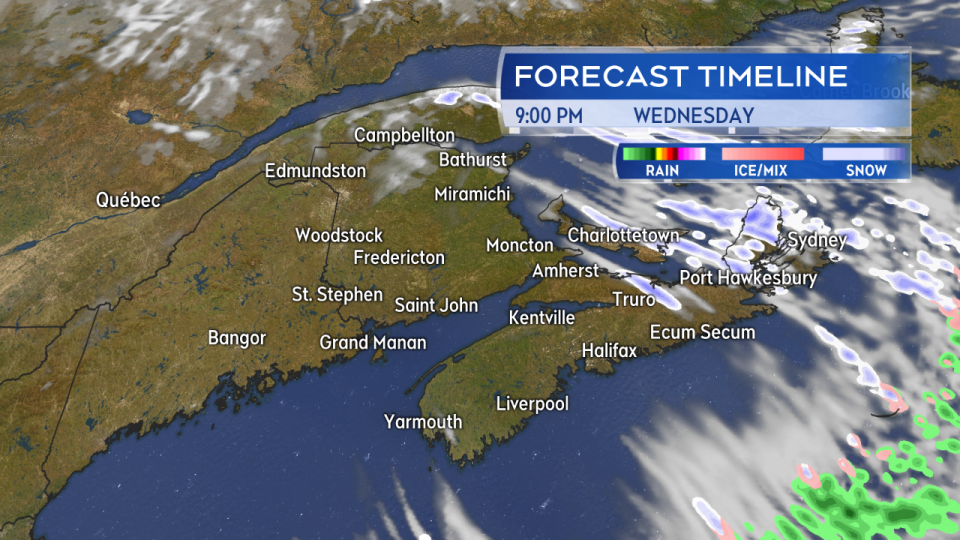 Onshore flurries and localized snow squalls are likely to be produced for eastern areas of the Maritimes Wednesday into Thursday as cold northwest winds blow over open ocean waters.

Snow squalls are a bit like thunderstorms in that due to the localized nature of the weather it is difficult to pin down what communities may be more impacted until visible on satellite and radar. That said, there are computer guidance indications that bands of snow squalls could produce amounts of 10+ cm locally through Thursday noon. 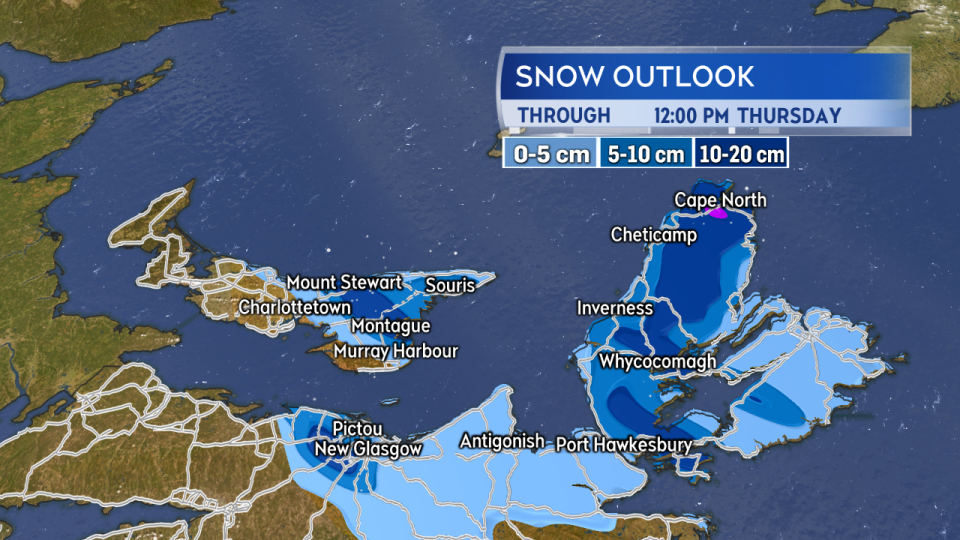 While the position of the most intense snow squalls is always a bit uncertain, guidance has indicated that amounts of 10+ cm may be present in narrow bands.

The more intense snow squalls can bring visibility down to near whiteout conditions and produce accumulation making road surfaces snowy and slippery.