The outrage over the alleged sexual assault, public humiliation and bullying of 17-year-old Rehtaeh Parsons is growing in global proportions, driven by tens of thousands of posts, tweets and shares on social media sites.

Sherri Bain, who knows the Parsons family personally, started an online petition demanding an independent inquiry into the police investigation.

Over 90,000 people have signed the petition in just two days.

“This has been troubling, deeply troubling for so many people,” says Bain. “It’s too late for Rehtaeh. She’s gone. But what we can do is take look at how we failed her and make sure that that doesn’t happen for any other children.”

The online petition is just a small sign of a loud and vocal cry for accountability from police, government officials, and from the teen’s tormentors.

Public anger is evident on social media sites, where many users are bashing the police, the school board, and the boys alleged to have raped Rehtaeh in November 2011.

The teen’s mother says she hanged herself in her bathroom last week, after 18 months of bullying and humiliation.

“It’s not up to us to exact justice. It should to through the proper procedures,” says Bain. “They shouldn’t be tried on Twitter or Facebook.”

An anonymous online activist group is threatening to release the names of the boys accused of raping Rehtaeh if police don’t take action, but police are warning against vigilantism.

“Police are continuing to face the challenge of the wide circulation of misinformation within the public forum. This has led to some suggestions of vigilante action against individuals alleged to be involved in this case, which we cannot condone,” said Halifax Regional Police Chief Jean-Michel Blais and Halifax District RCMP Supt. Roland Wells in a joint statement.

“We discourage anyone from taking the law into their own hands, or in any way encouraging vigilante justice. The information being used is unverified or may lead to an assumption of guilt towards people that may not actually be involved.   Only a police investigation in which evidence is collected and verified can lead to such conclusions.”

The executive director of the Avalon Sexual Assault Centre worries that a strong message about sexual violence is being lost in the mix.

“As a community, we should be supporting women by starting off by saying ‘we believe you,’” says Irene Smith.

Rehtaeh’s family says all she wanted was to be believed, and that she wouldn’t have wanted those who betrayed her to be bullied or tormented the way she was.

In Calgary, Prime Minister Stephen Harper said the story has shocked him and his wife, Laureen.

"I can just tell you, Laureen and I, as parents of a teenage daughter, we're just sickened seeing a story like this," he said.

"I think we've got to stop just using just the term bullying to describe some of these things. Bullying to me has a connotation of kind of kids misbehaving. What we are dealing with in some of these circumstances is simply criminal activity," he said.

Harper said the government will continue to encourage anti-bullying strategies.

"Obviously we are looking at ways to combat this and to deal with this when it happens," he added.

Nova Scotia Premier Darrell Dexter has appointed a cabinet minister to oversee the provincial government's response to the death of Rehtaeh Parsons as it tries to quell a storm of anger over how authorities handled her case.

“Nova Scotia is mourning the loss of Rehtaeh Parsons, a young girl who has touched the lives of people all across the province and around the world,” said Dexter today in the Nova Scotia legislature.

Marilyn More, the minister responsible for the status of women, will work with the ministers of justice, education, health and community services to assess support services for people who face sexual violence.

“You can easily see where something starts off in the health-care system and moves on to justice, and then moves into the school system,” said Dexter.

He said he believes supports are in place, but that they are not connected the way they should be.

“The real question to me is, how do we make sure that the appropriate supports are there so that these kids can get the help they need?”

“This is a society issue,” said More. “It’s going to take all of us, in terms of improving the situation.”

Nova Scotia Justice Minister Ross Landry has written a letter to his federal counterpart. He hopes he and Justice Minister Rob Nicholson can meet next week to talk about the case and whether something can be done within the Criminal Code.

“Absolutely, that’s his area of responsibility, and if there’s something that we can do, we’re certainly going to try,” said Landry.

The Halifax Regional School Board has also been asked to review its response to the situation and Education Minister Ramona Jennex said she will appoint someone to oversee that process.

She said she isn’t ruling out someone outside government.

“I think that we need to have fresh eyes look at this.”

Opposition leaders support the review and say they are ready to take part.

“At the end of the day, there has to be real teeth in the legislation to anyone seen committing a crime, particularly perpetrating any offence toward another person, that there will be consequences and penalties,” said Nova Scotia Liberal Leader Stephen McNeil.

“The government can move fast when it wants to,” said Nova Scotia Progressive Conservative Leader Jamie Baillie. “We’re here to speed along the unaddressed parts of the MacKay task force, and I think that’s where we should start.”

Today’s session in the legislature wrapped up early so members could attend a candlelight vigil for Rehtaeh Thursday night.

With files from CTV Atlantic's Kelland Sundahl, Jacqueline Foster and The Canadian Press 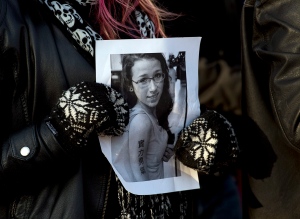