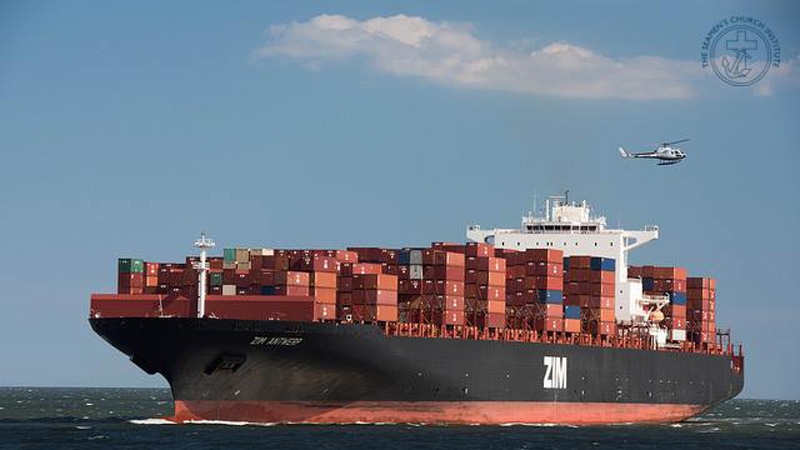 The Zim Antwerp arrives at the Port Newark-Elizabeth Marine Terminal on Monday. The massive container ship is set to arrive in Halifax on Thursday.(The Seamen's Church Institute/Facebook)

HALIFAX -- If the Zim Antwerp, a massive container ship that will call on Halifax Thursday, were to stand on its stern, it would dwarf Atlantic Canada's tallest building.

At 349 metres long, the vessel is more than three times the height of Fenwick Tower, a 98-metre Halifax apartment building. The Zim Antwerp is about as long as Canada's tallest office tower, Toronto's First Canadian Place -- if you include the skyscraper's antenna.

When the boat laboriously inches into berths 41 and 42 at Halifax's Halterm Container Terminal on Thursday morning with the skilled assistance of the Atlantic Pilotage Authority and local tug operators, the Zim Antwerp will break a record for the biggest ship yet to make Halifax a port of call.

In shipping speak, its container capacity is 10,062 TEU, or 20-foot equivalent units. It's a really big boat.

"It will be our first vessel over 10,000 TEU," Halifax Port Authority spokesman Lane Farguson said. "It crosses that psychological threshold and opens us up to a bigger class of vessels."

A combination of deep berths, long piers and the right yard equipment, including four super-post-Panamax cranes -- the largest modern container cranes available -- has put Halifax on the map of ultra-class container ships.

The Zim Antwerp will be weighted down with 10,000 of the usual smattering of red, blue and green containers, but just what cargo the vessel is carrying into Halifax is unknown.

Farguson said it will be mostly consumer goods, but that "anything that can be packed into a shipping container could be aboard" from perishable foods to furniture.

Halifax has been accepting increasingly larger vessels as both the port's infrastructure improves and changes to international shipping lanes beckon bigger vessels along the northeastern seaboard.

But after a second lane of the Suez canal opened in 2015, vessels over 8,500 TEU started calling on Halifax, Farguson said.

A year ago, an expansion to the Panama Canal further opened up shipping lanes and earned Halifax a visit from the 9,365 TEU CMA CGM Tage last October.

Meanwhile, the ongoing raising of the Bayonne Bridge in New York is expected to be ready for larger vessel navigation later this month, he said

Farguson said terminal operators, CN, marine pilots and tug operators have been working together to prepare for the arrival of vessels over 10,000 TEU in Halifax.

The Zim Antwerp has a home port of Monrovia, Liberia.