Fiona brought powerful and destructive winds to parts of the Maritimes Saturday resulting in hundreds of thousands of people losing power.

The storm landed east of Nova Scotia shortly after 4 a.m. Saturday between Canso and Guysborough.

The Canadian Hurricane Centre in Dartmouth, N.S., said Fiona set an unofficial record for the lowest-ever barometric pressure for a tropical storm making landfall in Canada. The recorded pressure at Hart Island was 931.6 millibars.

Thousands of residents across the Maritimes lost power due to Fiona's strong forces. A detailed article on power outages throughout the Maritimes can be found here.

Fiona was the equivalent of a Category 1 hurricane when it made landfall, with maximum winds around 150 km/h.

Sustained winds between 60 and 80 km/h were reported early Saturday morning for large areas of Nova Scotia. Extremely high winds were reported in areas of Cape Breton, including Grand Etang with gusts topping 167 km/h.

The Halifax Stanfield International Airport reported a gust of 109 km/h at 3 a.m., and a gust hit 135 km/h at the mouth of Halifax Harbour.

At the Charlottetown airport, the wind was gusting at 120 km/h at 10 a.m. local time, and a 150 km/h gust was recorded at the eastern edge of theisland at East Point.

Nova Scotia Premier Tim Houston was in Pictou County during the storm. He said the damage in that area is severe.

"Trees down, lots of property damage for sure, some superficial but some very, very significant," Houston said.

Houston said support from Ottawa has been requested.

"We've been in contact with our federal partners, and we have requested military and disaster assistance. So, I have to send a huge thank you to our friends in Ontario who have been instrumental in sending support," said Houston. "An official request for aid has been made and we have more support and more workers on the way."

"But this was a dangerous situation overnight, just from what I'm hearing from people and what I experienced here in my home. This was quite a historic storm and it's definitely not over yet."

RCMP members across Nova Scotia responded to “numerous” calls overnight and into Saturday morning. Police say some were routine calls, but the majority have been due to issues with roads, including washouts, downed trees, power lines and debris.

“If you don’t need to be on the road, we would ask that you please stay off the road,” he says. “Trying to get into a recovery, or a cleanup, phase there’s still going to be high winds, there’s going to be risks to yourself to being out on the roads. So, until the storm is completely cleared, until first responders and emergency crews can get out to clean out those roads, we just ask that you please stay home.” 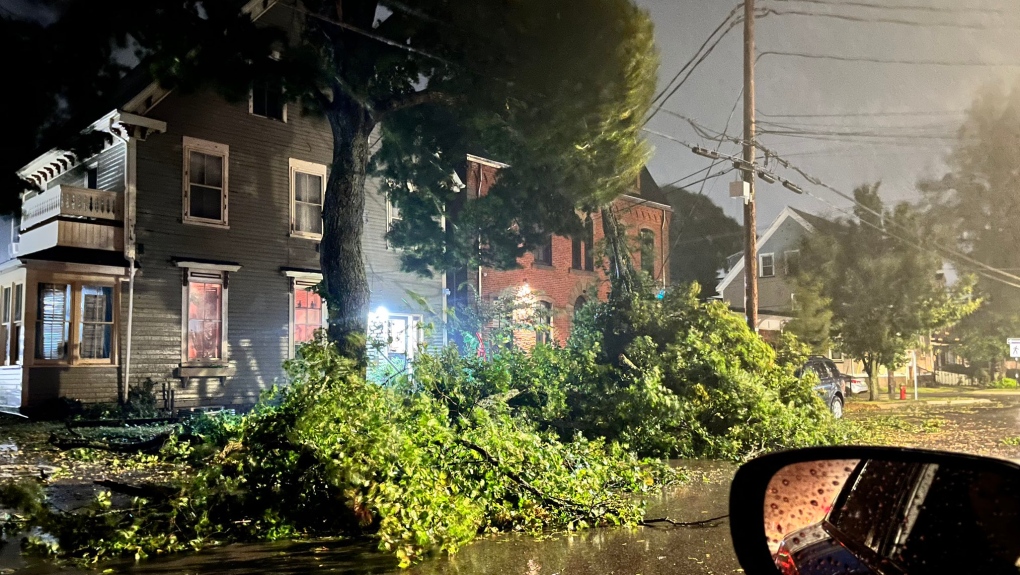 Charlottetown Police Chief Brad MacConnell says his members are prioritizing their calls to emergency situations Saturday morning into the afternoon.

Images from downtown Charlottetown show extensive damage. MacConnell says that devastation is being seen all around the island.

"But certainly, in Charlottetown, we've been hit hard here. I don't think there's a street that doesn't have a fallen tree or downed power line, so we certainly are asking people to stay home. It's not safe to be out and our first responders are very overtasked right now dealing with emergency situations." 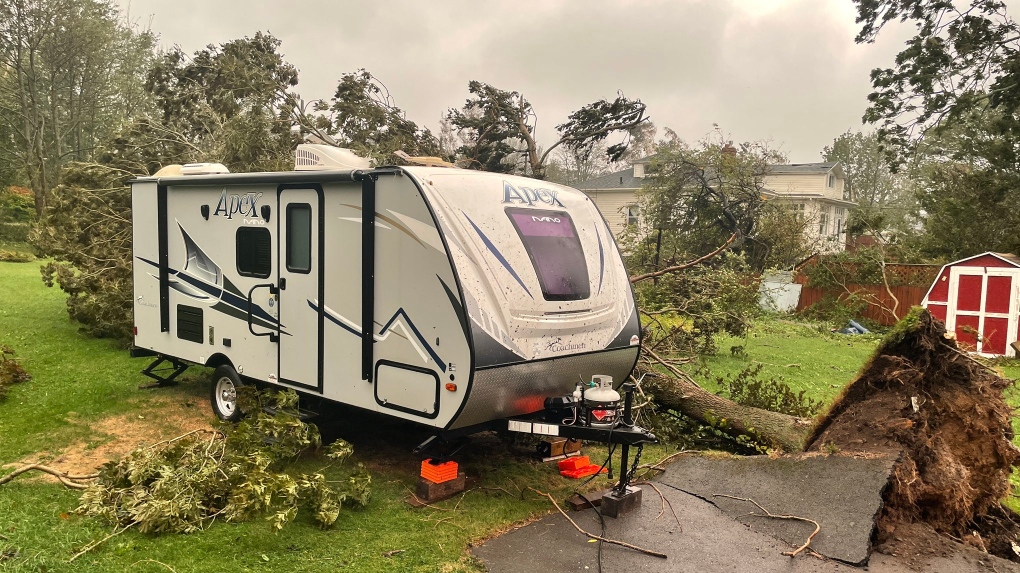 A resident in the Cape Breton community of Westmount says this 60-foot tree missed his trailer by mere inches. (Source: Twitter/Tom Mills)

In a statement late Saturday afternoon, New Brunswick Premier Blaine Higgs says his province was lucky to be spared from Fiona, unlike its neighbouring provinces of Nova Scotia, P.E.I. and Newfoundland and Labrador.

The premier says crews are still out assessing the damages of the storm.

"The extent of the damage may not be known for several days and we will be looking to determine what kind of financial assistance may be required," Higgs said.

Parts of eastern Nova Scotia and Prince Edward Island have recorded 75 to 150 millimetres of rainfall. Final totals have yet to be tallied.

Heavy rains also wrapped back towards to eastern coastline of New Brunswick, as well as northern and southwestern areas of Nova Scotia.

11:55 am: Massive tree no match for #Fiona pic.twitter.com/1TDnvP5dbO

In an update on CTV News Saturday morning, CTV Atlantic Chief Meteorologist Kalin Mitchell says a risk of storm surgeremains in the eastern part of the Maritimes and into the southwest of Newfoundland.

"A particular concern is the fact that we had some high tide times this morning," he said. "Now, because we're going to be getting passed those high tide times and the wind direction starts to change... that risk of storm surge is going to subside later into today, at least for the eastern half of the Maritimes." 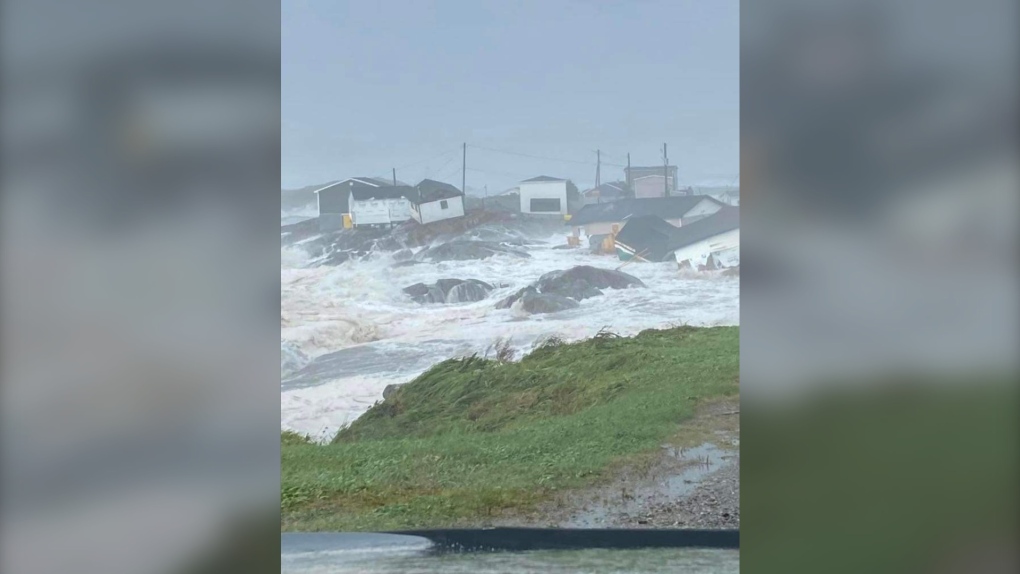 Severe flooding from Fiona is pictured in Burnt Islands, a small coastal community on the southwest coast of Newfoundland. (Courtesy: Scott Burry)

Hurricane and tropical storm warnings remain in effect for most areas.

The most up-to-date weather warnings and watches can be found on Environment Canada's website.

Elon Musk's Neuralink, a medical device company, is under federal investigation for potential animal-welfare violations amid internal staff complaints that its animal testing is being rushed, causing needless suffering and deaths, according to documents reviewed by Reuters and sources familiar with the investigation and company operations.

Forget that soda bottle or errant tube of toothpaste. One airline passenger thought it was a dandy idea to place a six-pack of sharp or potentially dangerous items into his carry-on bag at LaGuardia Airport in New York City on Sunday.

'Doesn't line up': MPs challenge minister over instances of MAID offered to veterans

Veterans Affairs Minister Lawrence MacAulay was challenged by MPs on Monday about how the federal government is handling the growing number of veterans who've reported being offered medical assistance in dying.

'The kind of leader I am': Smith accepts sovereignty act amendments from UCP caucus

Alberta's premier says she is OK with her caucus making changes to the sovereignty act bill she introduced last week, while the NDP argued it would be better to scrap it altogether.