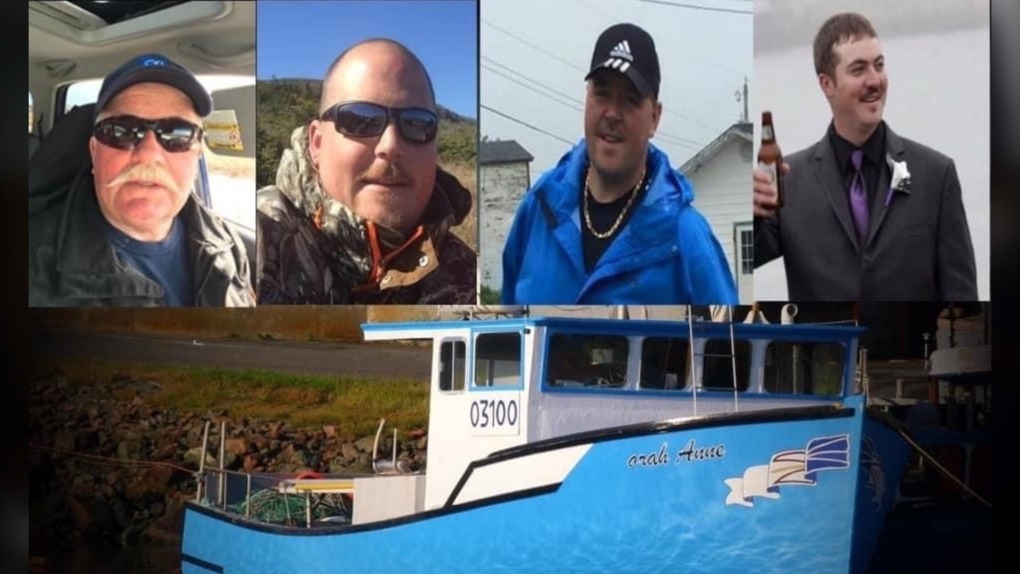 ST. LAWRENCE, N.L. -- A small Newfoundland and Labrador community is preparing a virtual service to mourn the deaths of four fishermen, three of them from one family.

The Canadian Coast Guard says the 12-metre vessel Sarah Anne is believed to have sunk off the western end of the mouth of Placentia Bay at some point following its departure from St. Lawrence after midnight on Monday.

Search and rescue teams have recovered the bodies of Ed Norman, 67; his son Scott Norman, in his mid-30s, and nephew Jody Norman, 42, while Isaac Kettle, a crew member in his 30s, has not been found and is presumed to have died.

Rev. Nelson Boren, a Roman Catholic priest at St. Thomas Aquinas Parish in St. Lawrence, says he's collecting video recordings of memories from the families and musical tributes for a memorial service to be livestreamed on Facebook.

He says the online service is a first step in community grieving due to restrictions on larger gatherings during the COVID-19 pandemic, and there also will be private funerals at the families' homes.

The date of the service has not been set, but details will be announced on the parish Facebook page.

Boren presided at Kettle's marriage service two years ago, and the priest says he had encountered the Norman family during community gatherings.

The 44-year-old minister says the families are shocked by the tragedy, and as of Thursday three relatives were planning to record memories for the virtual service.

"They are so devastated and still in deep mourning .... I told them on Wednesday I will keep them in my prayers and I will organize a virtual service in memory of their loved ones as we cannot gather in public worship," he said.

The combination of the tragedy and the pandemic has been difficult for the community of 1,200, said the priest.

"It's a double suffering and burden to the people, especially the most vulnerable," he said.

Boren said since he came to the town as a priest in 2016, he's learned the community has a history of participating in searches and mourning those lost.

He said the community still remembers the deaths of 203 people who died on Feb. 18, 1942, when two U.S. warships, USS Truxtun and USS Pollux, were caught in an icy winter storm and ran aground near the towns of St. Lawrence and Lawn.

"It's part of our history that we have been ravaged by disasters," Boren said.

In the latest tragedy, dozens of community members from St. Lawrence and the Burin Peninsula took to their boats during the search for the lost fishermen, according to Mayor Paul Pike and coast guard officials.

After the coast guard concluded its search of Placentia Bay Wednesday at sundown, the case was handed over to the RCMP as a missing persons investigation.

Ed Norman was an experienced carpenter who had purchased the fishing vessel last year and fixed it up with the help of his nephew and sons, his brother said.

The Sarah Anne was named for a family member's girlfriend who was killed in a traffic accident.

The four men left St. Lawrence early on Monday to fish for crab, and the search began shortly after 8 p.m. that night when they did not return as scheduled.

-- By Michael Tutton in Halifax, with files from Holly McKenzie-Sutter.

This report by The Canadian Press was first published May 28, 2020.