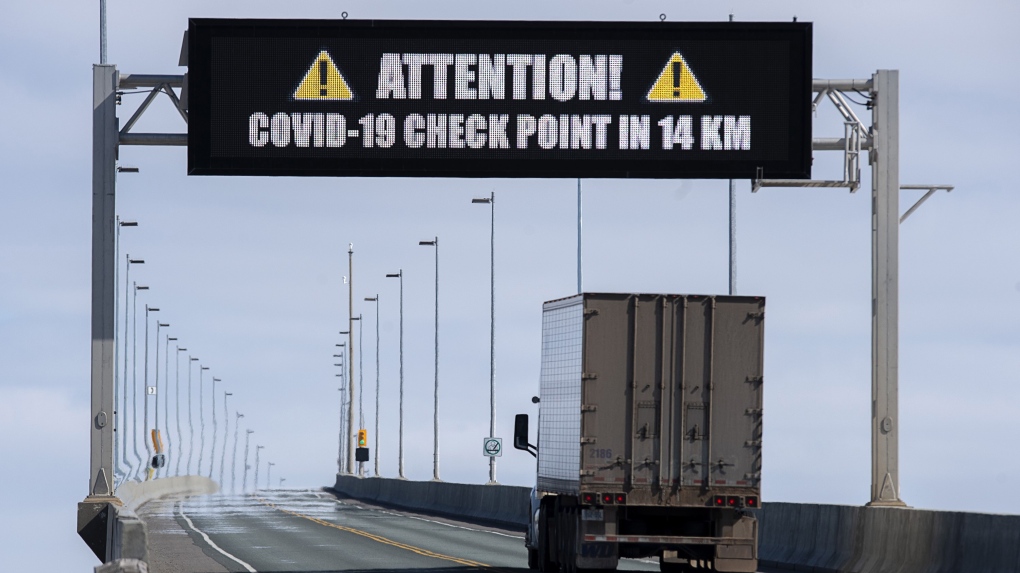 A sign indicates that provincial health department workers will stop traffic that has crossed the Confederation Bridge in Cape Jourimain, N.B. on Sunday, March 22, 2020. (THE CANADIAN PRESS/Andrew Vaughan)

CHARLOTTETOWN -- Prince Edward Island has announced an exemption that will allow Canadians with family in need of support to travel to the Island on compassionate grounds.

She says the new set of applications will be processed as quickly as possible over the next two to three weeks.

Morrison says applicants will have to prove their visit will provide "needed and welcome" support to a family member in P.E.I., including a parent, child, sibling, grandchild or grandparent.

People who travel to the Island will be required to self-isolate for 14 days.

P.E.I. has already opened its borders to seasonal residents from other parts of the country.

"P.E.I. is opening and actually has opened up significantly in the past few weeks," said Morrison. "But as we watch what has happened in different parts of the United States and elsewhere, the COVID-19 virus has not disappeared, and we should proceed with caution yet optimism."

Morrison said the province has received more than 1,600 travel applications from seasonal residents since June 1, with just over 800 approved for people from the Atlantic provinces, the territories and western Canada.

She said another 700 are outstanding from Ontario, Quebec and other areas.

Morrison also noted that Quebec is opening up for inter-provincial travel and tourism and P.E.I. like New Brunswick has agreed to allow Quebecers en route to the Iles-de-la-Madeleine to travel through the province beginning June 26.

Tourists will have to present a travel form required by Quebec upon entry to P.E.I. at the Confederation Bridge and must show proof of a reservation on the ferry to the Iles-de-la-Madeleine. The ferry reservation has to be used within 24 hours.

P.E.I. has had 27 confirmed cases of the virus, with no cases reported since April 28. All of the people who contracted the virus have recovered.

This report by The Canadian Press was first published June 16, 2020.

Canada-U.S. border to remain closed to non-essential travel for another month

No singing or dancing allowed as Ontario reopens restaurant patios