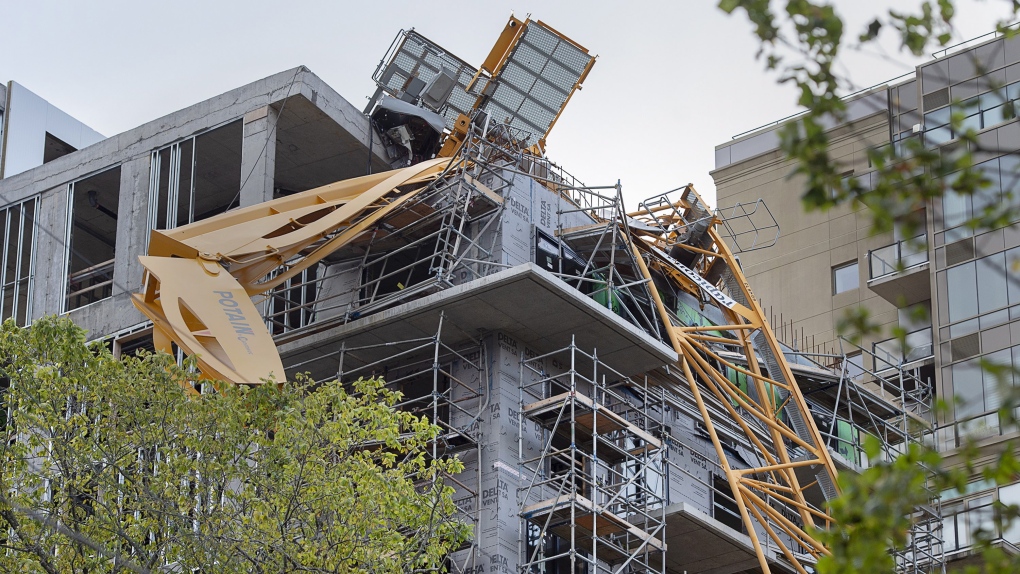 A toppled building crane is draped over a new construction project in Halifax on Sunday, Sept. 8, 2019. A proposed class action lawsuit is looking to recover losses sustained by businesses and residential tenants displaced by the collapse of a construction crane in downtown Halifax last month during post tropical storm Dorian. (THE CANADIAN PRESS/Andrew Vaughan)

HALIFAX -- A proposed class action lawsuit is looking to recover losses sustained by businesses and residential tenants displaced by the collapse of a construction crane in downtown Halifax last month during post tropical storm Dorian.

A notice of action was filed in Nova Scotia Supreme Court on Friday by lawyer Ray Wagner.

The proposed representative plaintiff in the statement of claim is Thornbloom Boutique, Ltd., which is the operator of a home decor and furniture store on South Park Street.

The named defendants, who have not yet been served by the plaintiff's lawyer, are Halifax-based site developers W.M. Fares Architects Inc., and W.M. Fares and Associates Inc., Lead Structural Formwork Ltd., of Moncton, N.B. -- the owner, operator and installer of the crane -- and The Manitowwoc Company Inc., the Milwaukee, Wis.-based designer of the crane.

In the statement of claim, the plaintiffs say they have suffered financial and psychological harm and they say the defendants are responsible "for the losses, injuries and damage" alleged in the document.

They allege the defendants breached the applicable standard of care by negligently "designing, fabricating, installing, operating, maintaining, and using the crane." None of the allegations have been proven in court.

The court document says the plaintiffs are seeking unspecified general and special damages as well as recovery of other costs.

"This is having a devastating impact on us," Thornbloom owners Debbie Morgan and Elaine Shortt said in a news release sent out by the law firm.

"We simply can't operate without customers having access to our store. We have no choice but to recover our losses this way because it's been going on too long, and there have been no concrete commitments made to provide assistance to us."

In an interview, Wagner said the claim will be served to the defendants in the coming weeks. He said he is in talks with four other affected businesses about joining the class action. No residential tenants have joined yet.

"This is necessary because the businesses are very concerned about their livelihood and their ability to be able to survive through this," Wagner said.

The crane collapsed onto a residential condominium tower under construction on Sept. 7. An evacuation order was issued by Halifax Regional Fire and Emergency that affected about 30 residents of the Trillium Building on South Park Street and at least six commercial businesses, according to the statement of claim.

The provincial government declared a localized state of emergency at the crane site on Sept. 18. It was extended twice and remains in place until Oct. 30.

The Transportation Department said Friday the next phase of the crane's removal will begin on Monday with the cutting and removing of the main tower.

Other parts of the twisted structure were removed over the Thanksgiving weekend. That work allowed residents from two nearby buildings to return home earlier this week.

The remaining removal work is expected to take 10 working days to complete, weather permitting, the department said. Once that happens the evacuation order will be lifted for the remaining residents and business owners affected.

Site cleanup is expected to conclude in early to mid-November.