QMJHL suspends play in Quebec because of COVID-19 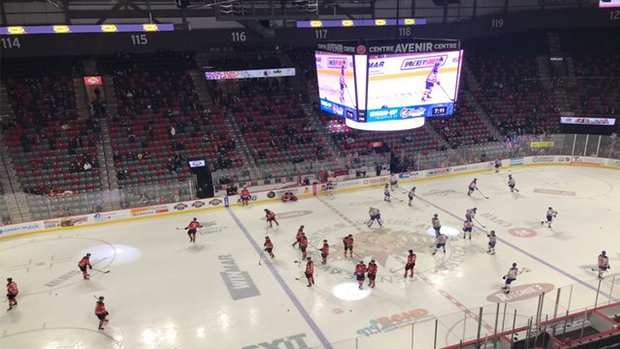 MONTREAL, QUE. -- The Quebec Major Junior Hockey League has suspended play in both of its Quebec-based divisions until at least Oct. 28 because of COVID-19.

The league's Assembly of Members made the decision on Wednesday. The QMJHL plans to reassess the situation in two weeks.

The league says continuing play in Quebec became almost impossible with six of 12 teams located in red zones, where organized sport is prohibited.

The league, which opened its season on Oct. 2, had outbreaks on two teams last week.

The Blainville-Boisbriand Armada announced they had 18 positive tests, while the Sherbrooke Phoenix said they had eight after the two teams played each other twice on the first weekend of the season. Both teams suspended all activities and went into isolation after the positive tests.

Early last week, the Quebec government announced the Montreal and Quebec areas were being classified as COVID red zones, preventing the Armada and Quebec Remparts from playing games.

The positive tests and the hot-zone announcement led to the postponements of 10 games.

Since then, more red zones have been announced, affecting play for other teams.

QMJHL teams have been playing solely within their divisions, meaning the six Maritime clubs remain in the Atlantic bubble.

The QMJHL is the only one of three Canadian major-junior hockey leagues to have opened play this season. The Ontario Hockey League and Western Hockey League have said they hope to start in December.

Ontario sport minister Lisa MacLeod said recently that contact and bodychecking would make it difficult for the provincial government to approve play in the OHL.

The OHL and WHL also have American teams, creating border concerns that would need to be addressed by the federal government.

All three leagues halted play last season shortly after the pandemic hit in March. League playoffs and the Memorial Cup were eventually cancelled.