The ship is here as part of the 175th anniversary celebrations for the Cunard Shipping Line.

The Queen Mary 2 recently completed the same trip as the line’s first flagship, the Britannia, in 1840. It departed from Liverpool on July 4 and ended in the Halifax Harbour.

The 150,000-ton vessel offers its passengers an experience marked by luxury and tradition, with opportunities to enjoy ballroom dancing, a champagne bar, caviar, and a daily sitting of traditional afternoon tea.

“We're incredible traditional. We try to make sure that we're quite formal in the way we conduct our business on board, going back to the golden age of travel really,” said Capt. Kevin Oprey.

The ship is also unique for being the only purpose-built ocean liner.

“The difference between an ocean liner and the cruise ship or resort ships is the Queen Mary 2 is built specifically for the North Atlantic trade,” Oprey said.

“So she has longer lines, she has a deeper draft and her construction is much stronger to withstand the strengths of the weather on the North Atlantic.”

Anniversary celebrations will continue throughout the day.

After arriving in Halifax early Friday morning, the ship is scheduled to depart the same evening for Boston and New York, where more celebrations are planned. 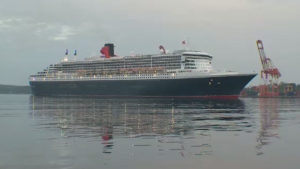 In Pictures: A sneak peek at Queen Mary 2