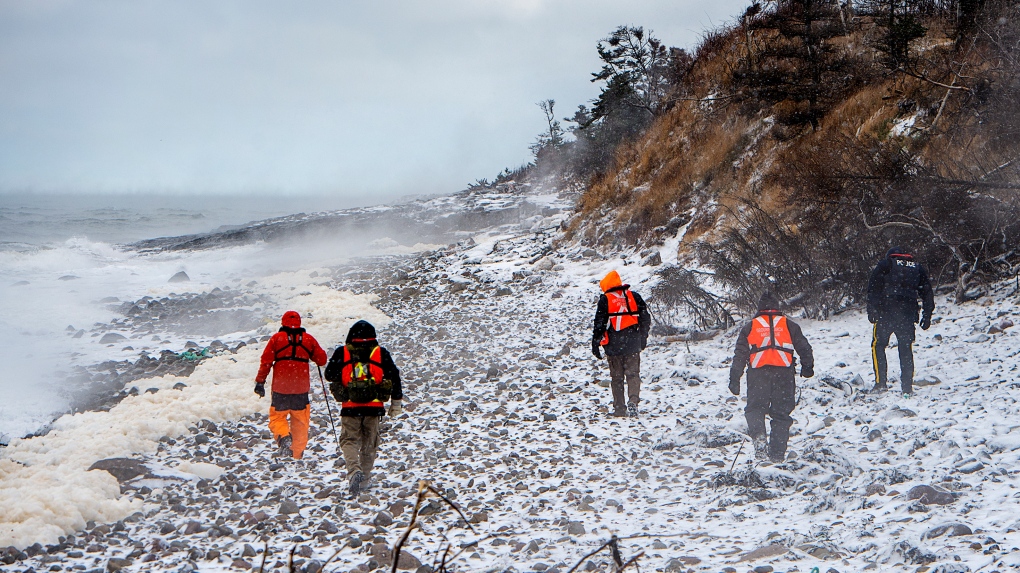 A scallop fishing group has collected more than $200,000 for the families of the six fishers who went missing after their boat sank off the coast of southwestern Nova Scotia in December. THE CANADIAN PRESS/Andrew Vaughan

HALIFAX -- Family members of fishermen who died when their scallop dragger sank in the Bay of Fundy reacted with shock and disappointment Saturday to word that the RCMP had officially called off its efforts to recover the vessel.

The force said the wreckage of the Chief William Saulis, currently lying more than 60 metres underwater two kilometres off Delaps Cove, is too far beneath the surface for divers to investigate safely. The Canadian Armed Forces also determined the risk was too significant for their divers to assist.

The boat sank in the early hours of Dec. 15 with a crew of six on-board. Just over a month later, on Jan. 16, video images of the boat emerged from a remotely operated underwater vehicle, or ROV.

At least one bereaved relative said word of the suspended search was likely to compound the emotional pain of her loss.

"You go through a roller coaster and the roller coaster gets to the edge and it just stops, and you come crashing down. You know they're not going to do it, and it's your son's final resting place," Lori Phillips, the mother of Aaron Cogswell, said Saturday morning.

"All I know is they are now declared missing individuals. But they're really not missing. They know where they are. Nothing of them has washed ashore, so they know they're in the boat," she said.

RCMP Sgt. Mark Bishop, the leader of the force's Nova Scotia dive unit, said he felt both a sense of achievement and disappointment when the boat was located.

He said the scallop dragger was lying too deep for police divers to safely don their tanks and descend to recover any bodies that might still be on board, as rules prohibit the RCMP underwater recovery officers from going below 48 metres.

"I was somewhat disappointed but also understand the complexities and challenges of diving in that area with low visibility, heavy currents at certain times of day and potential for entanglement and entrapment hazards," Bishop said in an interview Friday.

Family members have urged the RCMP and the Transportation Safety Board to consider all possible, safe methods to retrieve crew members bodies that might still be on board. The families are also asking that the boat be raised for further inquiry.

The quest for the Chief William Saulis was an unusual operation for the Mounties' diving unit on the East Coast. "Between weather issues, vessel issues, tide and currents, it wasn't a quick process," Bishop said.

The search started a few days before Christmas, as the RCMP divers boarded one of their nine-metre boats to attempt a visual survey of the area but had to turn back because of dangerous swells off Digby.

Bishop said the team transferred onto a coast guard research vessel and started to deploy a small, torpedo-shaped sonar system towed behind the boat. The searchers began at the site of some debris and worked their way several kilometres toward where the final emergency signals were detected when the boat sank.

Powerful currents made the sonar unit, referred to as a towfish, difficult to manage close to the sandy, largely featureless bottom. As the sea swelled, the jerking around of the cable would transfer down to the towfish, distorting some of the images.

Meanwhile, the sonar was only able to descend about 20 metres -- which is above the recommended level for ideal imagery of the bottom, Bishop said.

Beginning on Jan. 11, the search team was able to use the sonar to hone in on objects suspected to be the 15-metre dragger by deploying an ROV lent to the unit by the RCMP's national underwater recovery training centre in Nanaimo, B.C.

During the search, Kraken Robotics, a private firm with state-of-the-art sonar, offered the RCMP use of its technology without charge, but the company has said the police force declined.

"At that time we hadn't deployed our own equipment," Bishop said. "We felt at the time our equipment was sufficient for what we needed to do."

Phillips said she's been told that the crew members, including her son, could be termed as "missing" for up to seven years. She said the families need a quick resolution.

"Please just give us those death certificates so we can move on, so we can write our obituaries, so we can do our final rituals to give us some closure," she said.

The RCMP has said it will support investigations by the Transportation Safety Board of Canada and the Department of Labour and Advanced Education and continue to provide family members with support and updates.

This report by The Canadian Press was first published Jan. 23, 2021.

With files from Michael Tutton in Halifax.