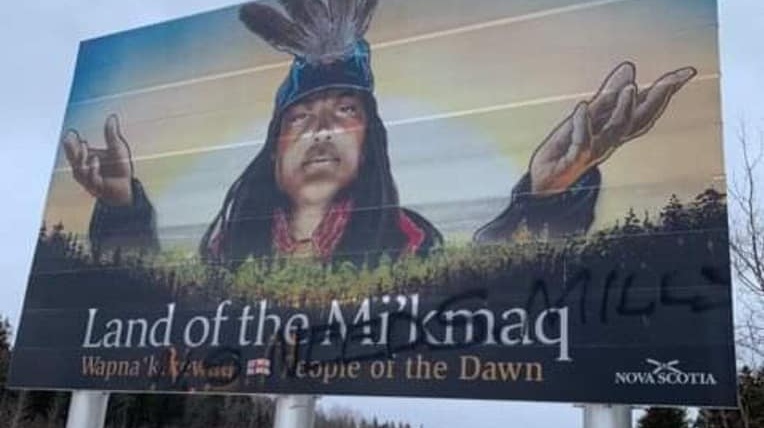 The words "N.S. needs mills" were spray-painted on the sign located on the Trans-Canada Highway near Amherst, N.S. (Lenore Zann/Facebook)

AMHERST, N.S. -- Police are asking for the public's help as they investigate the defacing of a Nova Scotia highway sign welcoming people to the land of the Mi'kmaq.

The words "N.S. needs mills" were spray-painted on the sign located on the Trans-Canada Highway near Amherst, N.S.

Clarke says police don't know when the vandalism occurred, and the sign has subsequently been cleaned up by the provincial Transportation Department.

The incident prompted a reaction from Premier Stephen McNeil who is also the province's minister of Aboriginal affairs.

In an emailed statement, McNeil says it is "beyond disappointing" to see such "clearly unacceptable behaviour."

"It in no way reflects Nova Scotia's values or how far we have come as a province in embracing cultural diversity," McNeil said.

The sign features an artistic rendering of a Mi'kmaq elder with his arms outstretched, and a caption reads: "Land of the Mi'kmaq: People of the Dawn."

McNeil also remarked on the graffiti which referred to his decision in December to enforce a provincial law that called for the closure of the Northern Pulp mill's effluent treatment facility on Jan. 31.

The decision led to the subsequent shutdown of the mill located near Pictou, N.S., leading to more than 300 job losses at Northern Pulp. The opposition Progressive Conservatives have said the closure could affect as many as 11,000 families of workers in the province's forestry industry.

"Boat Harbour needs to be cleaned up, and we are committed to ensuring that happens," McNeil said. "At the same time, the forestry industry is an important part of our rural economy and we will work with the sector moving forward."

This report by The Canadian Press was first published Feb. 4, 2020.