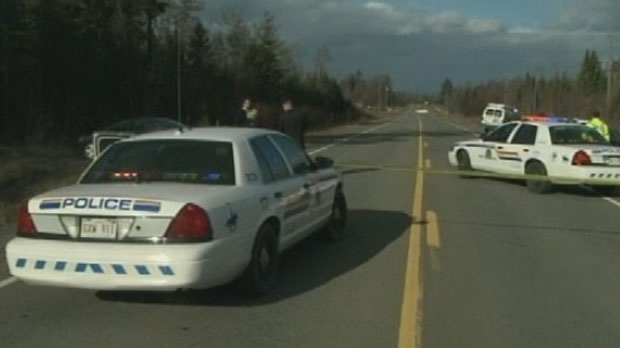 Police investigate the discovery of a woman's body on Killarney Road, north of Fredericton, on Tuesday, Nov. 6, 2012.

RCMP in New Brunswick are considering the death of a young woman to be suspicious after her body was found north of Fredericton Tuesday.

Police say the woman’s body was found in a ditch along Killarney Road just before 1:30 p.m.

Investigators have yet to identify the woman and say the circumstances surrounding her death remain a mystery at this time.

An autopsy was conducted in Saint John today, which police hope will help to determine her identity and cause of death.

The results of the autopsy have yet to be released.

“As the cause of the death has not yet been determined, it is considered suspicious and New Brunswick RCMP's Major Crime Unit is investigating,” says Cpl. Chantal Farrah in a statement.

Killarney Road was blocked to traffic until midnight, when one lane re-opened.

Police say both lanes re-opened to the public around noon Wednesday.

“We have investigators who are still on the scene today and they’re also getting assistance from volunteers who are trained in searching from the Sudbury Ground Search and Rescue Team,” says Farrah.

Police say the woman is in her 20s.

They are asking anyone with information to contact them.