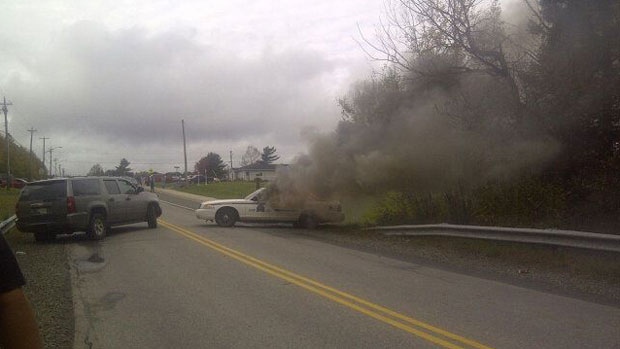 REXTON, N.B. -- A councillor with a native reserve in eastern New Brunswick says police arrested several people and used pepper spray on a crowd of shale gas protesters who have been blocking a highway for weeks.

Robert Levi of the Elsipogtog First Nation said he went to the protest site in Rexton early Thursday after hearing the RCMP had moved in to begin enforcing a court injunction against the protesters.

Levi said police sprayed dozens of people after 9:30 a.m. when he arrived at the protest site with the chief and council.

"They sprayed the crowd that was there," he said in an interview. "The chief was manhandled a little bit and all hell broke loose."

Const. Jullie Rogers-Marsh did not immediately return a message for comment. But in an earlier interview, she said she could not confirm reports of arrests, though she said Route 134 near Rexton was closed, along with a section of Highway 11 between Rexton and Sainte-Anne-de-Kent.

She said the Mounties moved in around 7:30 a.m. Thursday, but she couldn't say how many officers were involved or how many protesters were at the site.

"To ensure public safety we have closed the road until it is resolved," she said. "It's still unfolding."

Levi said he thought there were a couple of hundred people at one barricade on the site.

Schools in the area were closed early for the day.

The injunction was granted earlier this month to end the blockade of a compound where energy company SWN Resources stores exploration equipment.

Levi said he planned to stay at the site to try to block the movement of the company's equipment.

The RCMP blocked Route 134 on Sept. 29 after a protest began spilling onto the road. Protesters subsequently cut down trees across another part of the highway, blocking the entrance to the compound.

The protesters, who include members of the First Nation, want SWN Resources to stop seismic testing and leave the province.

Last week, Premier David Alward and Chief Arren Sock agreed to set up a working group to find a resolution. Meetings were held in Fredericton and Moncton.

At the time, Alward said: "I can say that we have a consensus that we're working towards finding a peaceful resolution and we will continue that work."

He said the working group, which would include members from his government, Elsipogtog and the energy industry, was to begin its work immediately.

But Sock said there were still many details to be worked out.

Alward has stressed that he doesn't have control over decisions of the RCMP and SWN Resources.

Assistant commissioner Roger Brown, the commanding officer for the RCMP in New Brunswick, said last week he was disappointed that discussions between the provincial government and the First Nation had failed to resolve the issue. At the time, Brown said the Mounties would take a measured approach to resolving the situation.

Opponents of the shale gas sector say the process used to extract the resource -- hydraulic fracturing, also known as fracking -- could pollute drinking water. But proponents of the industry say such concerns are overblown and don't take into account the possibility of replacing coal and oil with cleaner burning natural gas.