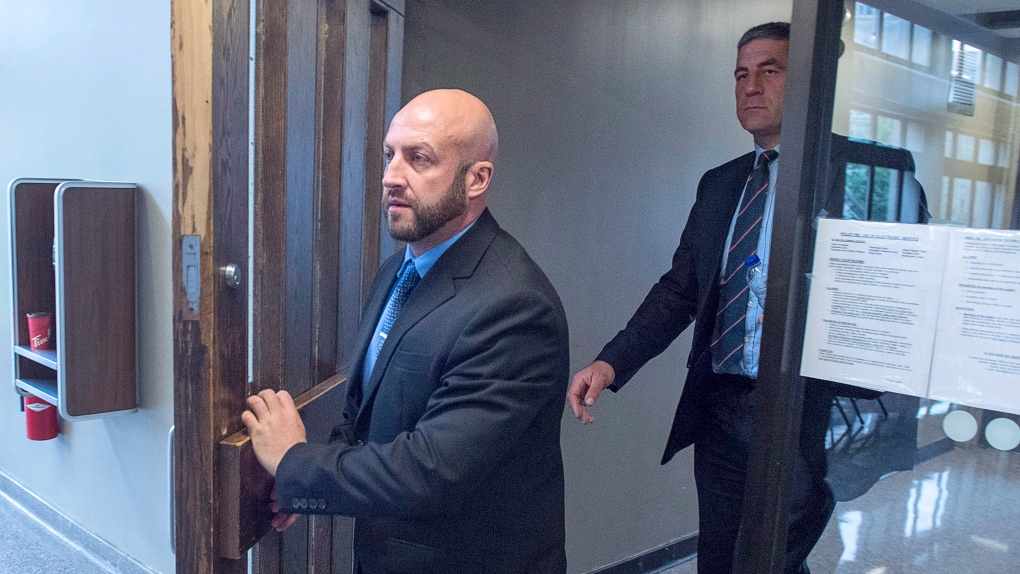 HALIFAX -- The friend of a woman who was allegedly sexually assaulted at a Halifax-area military base said during a police interview that the complainant had told her at least four men were involved in the incident and were "taking turns," the trial of a British sailor heard Tuesday.

Under cross-examination by Darren Smalley's lawyer, the woman in her early 20s was shown a short video clip of her interview with a military police officer on April 11, 2015 -- roughly one day after the alleged incident in the barracks of 12 Wing Shearwater.

"She was just like... 'When I came to, I literally couldn't tell you who it was,"' the friend told Sgt. Tyler Bruce-Hayes in the video, describing what the complainant had told her about the incident.

"She said they were going back and forth, taking turns."

Smalley, who was in Halifax to participate in a naval hockey tournament, is charged with sexual assault causing bodily harm and participating in a sexual assault involving one or more people.

The woman from Halifax had earlier testified that she found her friend upset and naked on a bed in a boarding room, after the pair had gone to the military base to watch a hockey game.

She agreed with defence lawyer Ian Hutchison that she had made an assumption after coming into the room that a sexual assault had taken place, and he asked her why she didn't call for help.

"My main priority was to get her out of there," the woman said.

She agreed that she had been looking around the room for cameras or cellphones because the complainant had indicated she had seen flashes. The woman testified that she found a phone and put it in the fridge.

Hutchison asked why she was trying to destroy the device if it contained possible photographic evidence of a sexual assault.

"I don't know. There were a lot of really stupid things I did that day," she said.

Hutchison replied: "The fact is that there was no sexual assault."

She responded: "That's a lie."

The woman confirmed she saw Smalley asleep in his bed when she first went into the room, and never saw any physical contact between Smalley and the complainant.

She also testified that her friend appeared "at ease" throughout much of the evening.

"She's not crying? She's not telling you she wants to leave? She's not expressing any concern for her own safety?" Hutchison asked about the complainant's demeanour before they went to bed.

"No," she replied, agreeing that the Royal Navy hockey players were welcoming and friendly.

Earlier Tuesday, the witness was shown a video from inside the barracks, and became emotional after identifying herself and the complainant sitting in a room as music played.

She said she didn't know the short video was being taken, and said: "It's just really weird to see a video from a really scary night."

The Crown has stayed charges against another sailor, Simon Radford, who is in hospital in the United Kingdom with a serious infection.

The defence did not finish cross-examining the complainant's friend. She's expected to continue testifying Wednesday morning.