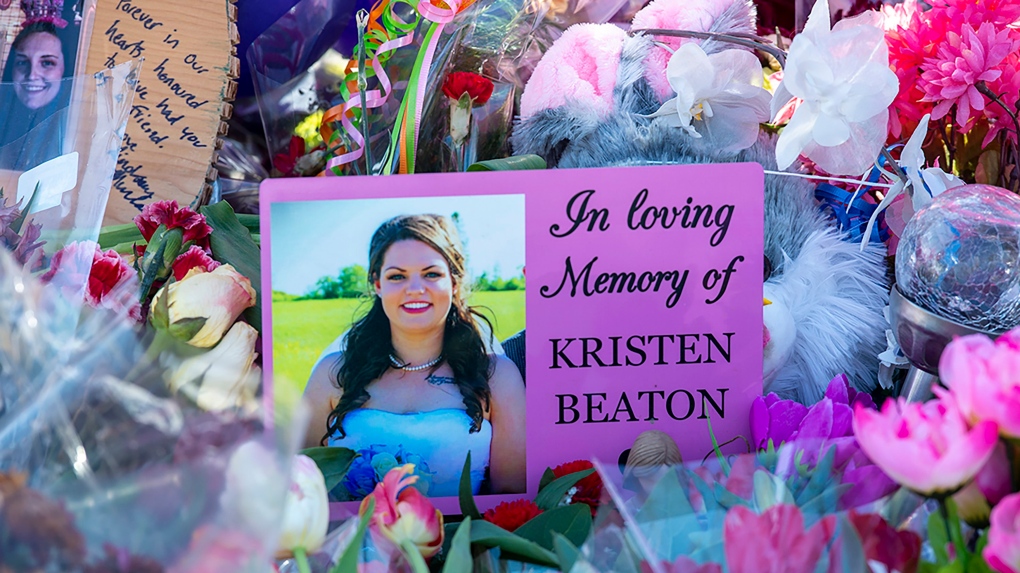 A photo of Kristen Beaton is displayed at a memorial in Debert, N.S. on Sunday, April 26, 2020. The VON care worker was shot and killed when she stopped along the road. (THE CANADIAN PRESS/Andrew Vaughan)

HALIFAX -- Canadians and people from around the world donated $6.2 million to help the families in Nova Scotia affected by the mass shooting last spring that claimed 22 lives, the Canadian Red Cross confirmed Tuesday.

With the one-year anniversary approaching, the not-for-profit organization said 99 per cent of the Stronger Together Nova Scotia Fund has been distributed or committed to those families.

The fund was established at the request of the Nova Scotia government days after a gunman disguised as a Mountie started a 13-hour killing rampage on the night of April 18, 2020.

The killer also set fire to several properties in northern Nova Scotia and wounded three people before he was shot dead at a gas station by two RCMP officers on the morning April 19, 2020.

Bill Lawlor, a provincial director with the Red Cross, said the centralized fund helped alleviate early concerns about how donations were being collected.

"People from right across Canada and beyond were reaching out to the premier's office and asking what they could do to help," Lawlor said in an interview Tuesday.

"There were some concerns, real or perceived, about the other funds that were being established ... in terms of their legitimacy, and in some cases when family members did not know who was behind those other funds."

Lawlor said 60 per cent of the money was distributed based on financial need after the Red Cross spoke to all of the families involved, though immediate financial assistance was made available to those who needed it.

The remaining 40 per cent has been set aside for those with more complex and long-term needs, which includes children who lost parents or families who lost their primary breadwinners.

"The (families) have been a part of the process ... from the early days," Lawlor said. "It meant having those conversations with each household and trying to understand the (financial) impact .... though no amount of funding would have alleviated the suffering of the families."

Administration costs were covered by the Nova Scotia government, which means all the money raised will be distributed to those who need help.