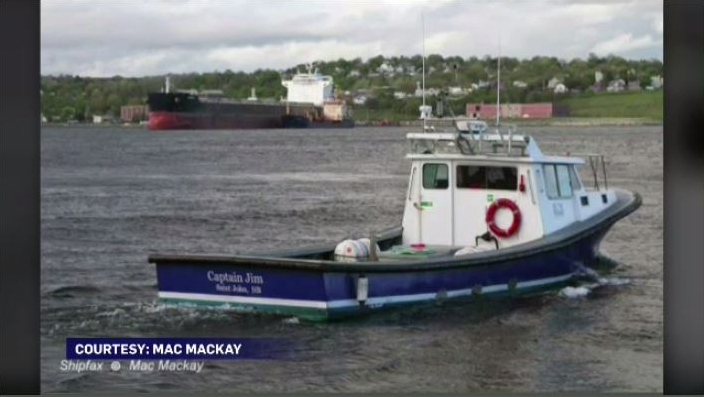 The Transportation Safety Board of Canada, in a report released today, says three people were aboard the 12-metre Captain Jim when it started taking on water as it approached Eastern Passage, N.S., on Jan. 29, 2019.
HALIFAX -

An independent investigation has found the 2019 sinking of a small workboat near Halifax that claimed one life was caused by hull modifications that compromised the vessel's stability.

The Transportation Safety Board of Canada, in a report released today, says three people were aboard the 12-metre Captain Jim when it started taking on water as it approached Eastern Passage, N.S., on Jan. 29, 2019.

The investigation report says the water that flooded the boat's hull and deck had entered through an open "freeing port," which is an opening covered by a hinged plate that is supposed to allow water from the deck to run overboard.

One crew member and a passenger managed to escape the sinking boat by jumping into a life raft around 2 a.m.

Divers later recovered the body of the second crew member from the boat's submerged wheelhouse.

The board concluded that the modifications had not been properly assessed, and the company that owned the boat did not ensure its operators and crews were familiar with stability principles or held the necessary certification.

"If vessel modifications are not adequately assessed for their safety implications, there is a risk that those modifications may unknowingly compromise a vessel's stability," the report says.

"As this occurrence demonstrates, if a vessel operator's processes for managing safety are missing key elements, and there is no requirement for a formal audited safety management system, there is a risk that vessels will be unknowingly operated in a manner that compromises the safety of those on board."

This report by The Canadian Press was first published Sept. 23, 2021.

Pattie Lovett-Reid: Talking about finances may not be romantic, but is necessary

Having a clear and honest discussion about your financial situation and money mindset before you walk down the isle just seems to make sense, but it isn't always easy, CTV's chief financial commentator Pattie Lovett-Reid writes in her latest column on CTVNews.ca.

Trudeau's visit to Kamloops is 'bittersweet,' Calgary and Edmonton elect new mayors, and parents consider vaccines for their kids. Here's what you need to know today.

After heartbreaking and revealing details about the circumstances of her death were announced to the public, Gabby Petito's parents are finally bringing home the remains of their 22-year-old daughter.