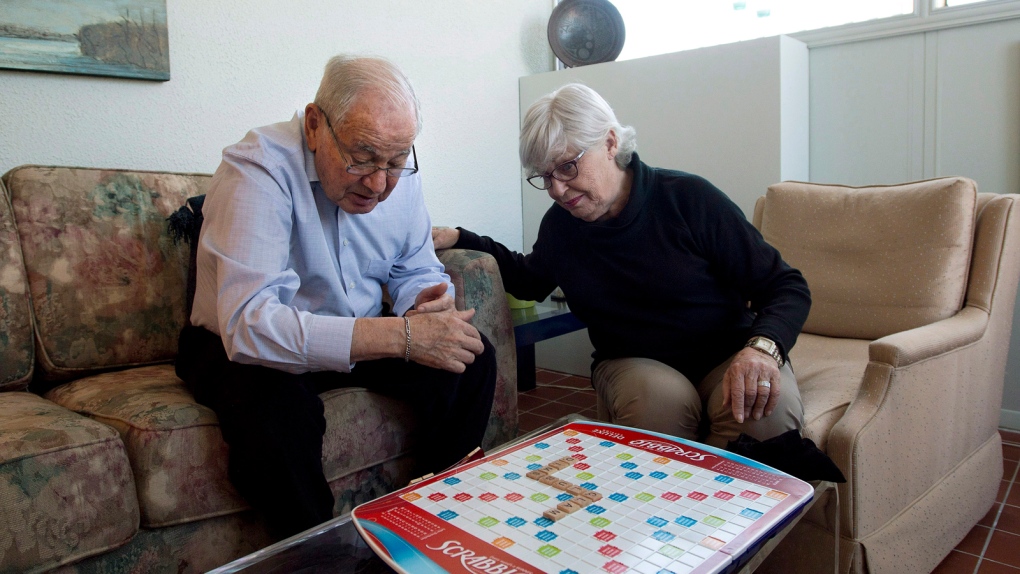 Sandra Atlin plays Scrabble with her husband Gordon, who has Alzheimer's disease, at their home in Toronto on Friday, Oct. 11, 2013. (Nathan Denette / THE CANADIAN PRESS)

FREDERICTON -- The number of dementia cases in New Brunswick will rise dramatically over the next 20 years, and rural areas of the province will face a particular challenge, according to a study by a professor at Mount Allison University.

Frank Strain has released a study on dementia cases in New Brunswick and the impact of depopulation in rural communities.

He attributes part of the increase to people living longer and baby boomers moving into old age, greatly increasing the number of elderly people susceptible to dementia.

Strain said the number of young people leaving rural parts of New Brunswick in search of work will leave few family members to diagnose and care for relatives in need.

"There's going to be no family care available, so the government is going to have to think about what alternatives are going to be possible," Strain said Tuesday.

He said even if families have access to private care, the distances that caregivers must often travel makes the cost of care very expensive.

He said almost 25 per cent of people have some form of dementia by age 85, and that number jumps to 50 per cent of 90-year-olds

Jamie Matthews, communications co-ordinator for New Brunswick with the Alzheimer's Society of Canada, said the impact of dementia cases in rural areas is a huge concern.

"Who's going to be taking care of our aging population?" he said.

Strain said there will need to be more nursing homes, private special care homes, and programs to pay for the care required.

"It is a nightmare, and it's going to get worse," he said.

Strain said the total cost of dementia care in New Brunswick is expected to rise from $339 million in 2011 to over $2 billion in 2031. Those figures include lost wages of family members who must stay home to care for someone with dementia.

"Currently most of the cost of dementia care is borne by those suffering from dementia and their families, not the government and taxpayers," said Strain.

Matthews said the Department of Social Development does offer a number of programs, and family members should apply for assistance.

He said the government is helping the Alzheimer's Society fund a new program called First Link, to help families immediately after someone is diagnosed with dementia.

"We're going to be able to have direct contact with families and those people who are diagnosed, so hopefully we can avoid that crisis situation we face all too often," Matthews said.

Johanne LeBlanc, a spokeswoman for the Department of Social Development said government has invested $190,000 in the program with the Alzheimer's Society.

She said the program is just one of many that will be announced as part of the government's $10.3 million Home First Strategy.

The strategy is aimed at helping seniors stay in their own homes longer.