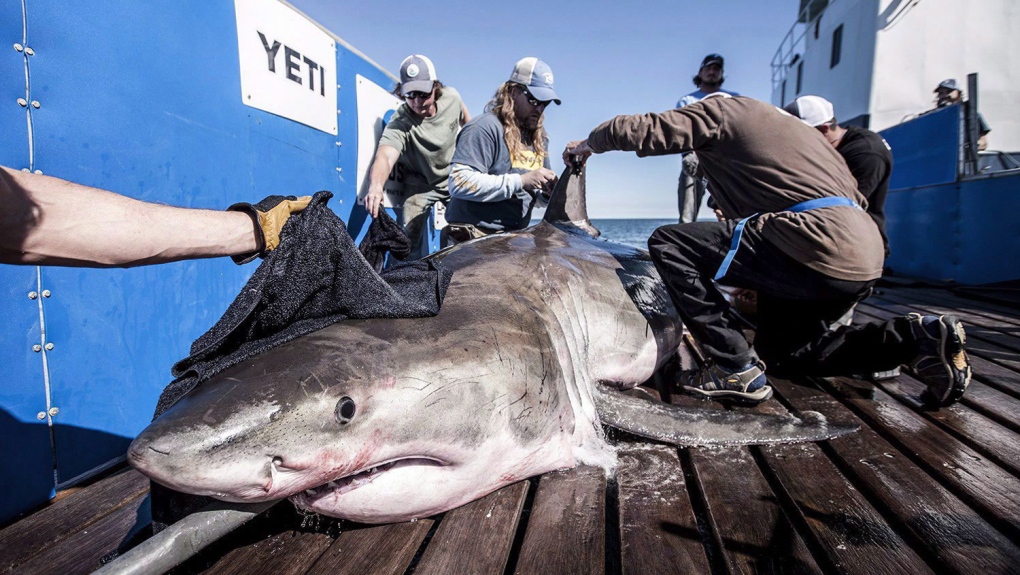 HALIFAX -- An internet-famed great white shark is extending his much-watched sojourn in Atlantic Canada, in what one researcher is calling further evidence that Nova Scotia's waters may be a hot spot in the shark mating scene.

The 600 kilogram shark named Hilton has been cruising along the East Coast in recent months, much to the delight of locals who have been charmed by the social media darling's wry Twitter feed, which boasts more than 17,500 followers.

Hilton -- who was tagged by the research group Ocearch in South Carolina in March -- first surfaced off the coast of Nova Scotia in early August, and the tTitter account set up to chronicle the shark's movements tweeted about his latest stop in Mahone Bay on Sunday.

"Of course I am back in Mahone Bay. I am here for the Father Christmas Festival!" ΓåòHiltonTheShark tweeted, along with a Santa Claus emoji.

Aside from a few brief detours, Hilton can't seem to say goodbye to Nova Scotia.

Perhaps Hilton is flattered by the warm reception he's received from Nova Scotians, said Ocearch founder Chris Fischer, but he thinks there may be something else drawing the mature male shark back to the province's shores.

"I believe he's up there looking for love and has been all fall," Fischer said in a phone interview from Louisville, Ky. "They should only have one thing on their mind, and that's making baby sharks."

If Hilton is hoping to woo a sharp-toothed suitor, it seems like he'll have plenty of fish in the sea to choose from, Fischer said.

Based on Ocearch's findings, shark migration patterns in Nova Scotia's southern waters are consistent with there being a breeding site in the area, according to Fischer, which could mark an important step towards unravelling the mysterious mating habits of great white sharks.

"(Solving) the life-history puzzle of these large sharks is fundamentally important to the future balance of the whole northwest Atlantic," he said. "It needs to be a U.S.-Canadian effort, because the sharks don't know where the border is."

Fischer said Ocearch, which is based in the U.S., is hoping to get Ottawa's permission to launch an expedition in Eastern Canada next fall to scout out potential mating sites in the area.

He said Ocearch plans to file its application for a permit with the federal Fisheries Department in coming weeks. Fisheries officials could not immediately be reached for comment on the matter.

Fischer said the group is willing to invest between $500,000 and $1 million on the expedition. Ocearch is looking to collaborate with Canadian scientists on the potentially "groundbreaking" research, he said, but hasn't gotten any bites so far.

The proposed multi-year project aims to tag between 20 and 50 sharks in the region, according to Fischer. Tracking juvenile sharks will be key, he said, because their fates will determine the species' prospects going forward.

Large sharks play a vital role in maintaining the balance of marine ecosystems, he said, and even a small upset has the potential to cause a ripple effect that could impact Canada's eastern waters for generations to come.

"As these large sharks go, the system goes," said Fischer. "Where you live, if it is a mating area, it is a very special place. It is one of the few places in the world that's fundamentally important to the abundance of the entire region."

If anyone is up to the task of protecting these elusive creatures of the deep, it's Nova Scotians, Fischer said.

"When you look at a community of people up there, they're obviously so plugged into the ocean," he said. "For Hilton being a come from away, and to have been welcomed by the people up there, is true leadership that I hope the rest of the world picks up."

He said Hilton could stick around Nova Scotia until late December, and he expects him to return to his old stomping grounds next year.

Hilton isn't the only shark that's been spotted around Nova Scotia lately.