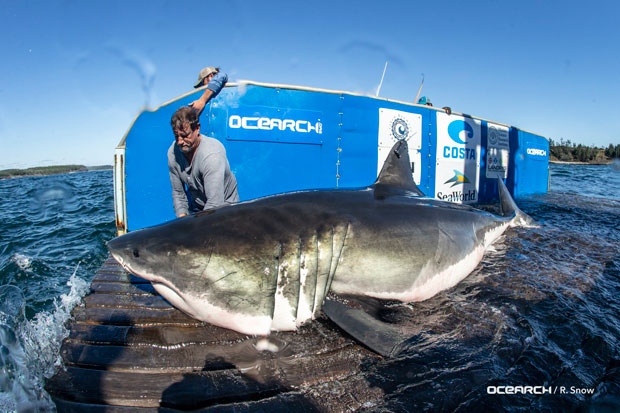 The official Ocearch Twitter account posted a photo of the male shark, named Hal, that was tagged off the south shore of Nova Scotia. (Ocearch/Twitter)

Scientists with the marine research organization Ocearch found "Hal" -- named for the people of Halifax -- lurking off the southern coast of Nova Scotia near West Ironbound Island.

Chris Fischer, the organization's founder, described the four-metre-long apex predator as having a bit of an attitude, posing a challenge to the scientists looking to tag it and collect samples.

"It was highly determined; I've only dealt with a few sharks ever like Hal," Fischer said in an interview from the Ocearch vessel off the coast of Nova Scotia.

"He really tested us from a power standpoint ... he was just a really impressive, powerful animal."

The great white appears to be in perfect mating condition, Fischer said: he's healthy, full-bodied, mature, and free of blemishes. Fischer said the semen sample they collected from him indicates he may be ready for some companionship.

Ocearch has already tagged two other sharks -- Nova and Jefferson, both male as well -- in the same area last week, but Hal was the first one from which they were able to get a full sperm sample.

Fischer said it was "very rare" for researchers to find three male sharks in a row and they tend to find more females than males. He said they have seen other sharks they weren't able to catch, suggesting Nova Scotia's waters may be more full of sharks than they thought.

The next piece of the puzzle, he said, would be finding a mature female shark. That could help researchers figure out when and where the sharks are mating, along with when and where the females give birth, with the ultimate goal of locating the baby sharks and finding the nursery.

"Looking after and finding the nursery is kind of the holy grail of the work, because that's where the sharks are most vulnerable," Fischer said.

While sharks may appear scary, Fischer said they're very important to the marine ecosystem, and with great whites' conservation status listed as "vulnerable," Fischer hopes his group's research can help make the population stronger.

"If we can solve the puzzle of their lives and give that data to the people who are managing the ocean ... then we can make sure we move the system towards balance and abundance," he said.

The Ocearch team made up of U.S. and Canadian researchers started their work in Atlantic Canada in mid-September, trying to shed more light on the migratory patterns of the mysterious creatures.

Ocearch is best-known in Nova Scotia for tagging Hilton, a celebrity great white shark who regularly reveals his location in a wry and charming Twitter feed that has almost 45,000 followers.

While Fischer hopes to come across a female shark, he said he's happy with the expedition so far and will be grateful for any shark that comes their way.

"It'll be up to the ocean -- she'll decide what sort of gifts and opportunities she'll give us," he said.

"And we'll just try to be prepared recipients for those gifts."