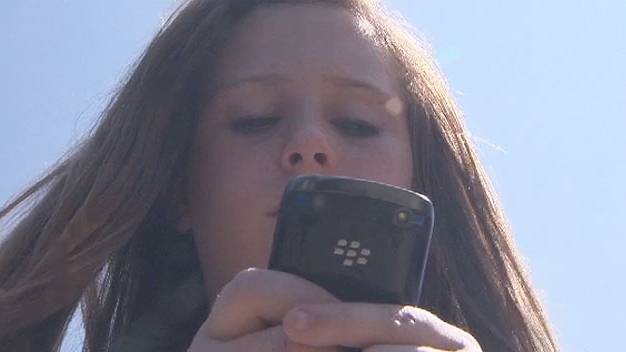 Claire Bragg was thrilled to receive a brand new BlackBerry for her 13th birthday, courtesy of RIM.

Claire Bragg will never forget the present given to her for her 13th birthday, thanks to Research in Motion.

The Halifax resident really wanted a BlackBerry for her birthday, but her mother wanted to get a cheaper phone. The two eventually settled on a compromise: a used BlackBerry.

“I recommended some apps for RIM to create,” says Cynthia. “They’re really more about what moms need.”

There is the “anti-booty shot” app, which makes kids wear more clothes, the “creeper” app, which detects sexting messages and sends them to mom’s phone, and the “grounded” app, which freezes the BlackBerry with a simple text from mom.

The whole thing took off on social media sites and got RIM’s attention.

Claire’s mom surprised her at paddling practice Friday and presented her with a new smartphone, courtesy of RIM.

“Her birthday gift would have been delayed. I wouldn’t have been able to afford it for a little bit longer, so you know, RIM just made her 13th birthday for her,” Cynthia tells CTV News.

Claire was reeling from the surprise, and says she isn’t sure what she’s going to do with her new phone first.

“I’m probably just going to marvel at its beauty for a minute then use it,” laughs Claire.

RIM tells CTV News via text message they wanted to be part of Claire’s birthday because they saw this as an opportunity to reward a very big fan.