Saving Sammy: From an emotional reunion, to becoming leader of the herd

"What I'm envisioning is a bag full of apples in my pocket, already cut up.”

I don’t remember the last time I saw Dad this excited.

“When I see him, (I’ll) offer him that and see how he likes it and I think it will bring back a memory for both he and I."

My father, Denny Baxter, was just like a kid in the backseat. He fidgeted and joked all the way to Ardoise, N.S., where we would welcome Sammy home.

The truck and trailer pulled into the yard in the early afternoon, after completing the long drive from Pennsylvania.

Then, the gate swung open and Denny stepped on the trailer by himself.

Or maybe it was ‘little buddy,’ it was hard to tell because his voice cracked and wasn’t much higher than a whisper. However, we could hear the kiss he planted on his muzzle.

We gave them a private moment – Dad and Sammy’s first together in a decade. 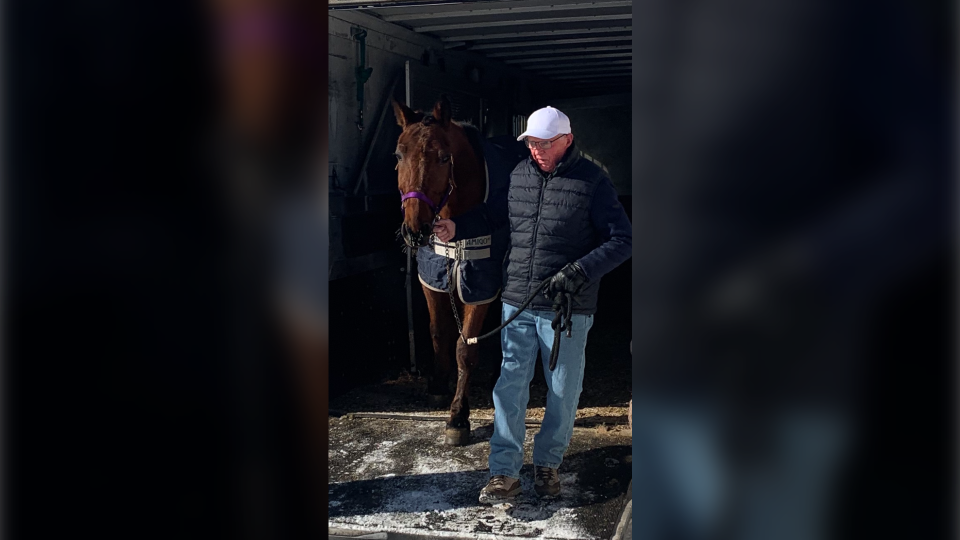 It was bitterly cold when Dad led Sammy off the trailer, -13 and windy, but our hearts were warm and eyes were wet.

My wife Colleen stepped up to be the second to greet hm.

“Go see mom,” Dad said as he led him to my mother Jeanie.

I swear the old horse remembered her. It was in the way he intentionally leaned in and rested his nose on her chest as she welcomed him home.

Former firefighter Kristy Falconer bought the Hants County ranch after a life threatening health crisis, fulfilling a promise she made to herself from a hospital bed.

If she healed, she was going to buy a farm and work with horses.

Just days after her release, she packed up and moved from British Columbia to the Maritimes to start a new life with her husband Richard and two teenage sons, Jordan and Dylan.

Two years later, she was offering Sammy a new life.

"Oh, he looks so much better,” Dad said after taking him in. “When he was in that kill pen he looked like the wrath of hell."

Only six weeks earlier, my wife and I had purchased Sammy from a Pennsylvania farmer who gathers horses in a kill pen, then ships them to Canada or Mexico for slaughter. 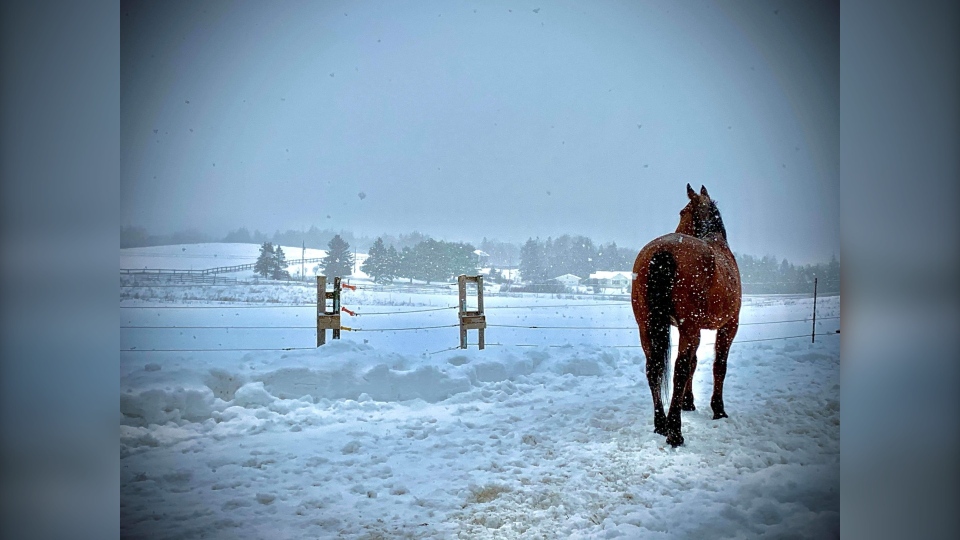 Sammy spending a peaceful moment alone in the field at Serenity Acres.

Mom sacrificed so much over the years so Dad could pursue his harness racing dreams. She worked hard as his groom and travelled with him extensively to race tracks all over eastern North America.

“You see good things and you see bad things,” she said. “Your mind never leaves the few bad things that you do see.”

“You wonder what he’s been through. For ten years we didn't know, only he knows," she added.

We may never know the specifics, but we can deduce a few things.

Sammy had been used as a workhorse, likely for Amish owners. The part of Pennsylvania where he was discovered is a largely Amish community. Plus, there’s a longstanding practice of Amish owners buying retired race horses to pull their biggies and perform labour. His condition backed it up.

“His suspensory ligaments were in tough shape,” she said. “He had a pelvis rotation and what looked like a scoliosis in his spine.”

A vet also discovered a heart arrhythmia. Most of us have our aches and pains in middle age, the good news is there was nothing life threatening.

Sammy clung close to Kristy on his first day out with his new herd.

“Oh someone’s feeling relaxed are they?” Kristy asked him.

The Standardbred yawned repeatedly in the winter sunshine and worked his jaw over and over, the way horses do when they’re relaxed. He couldn’t keep his eyes open.

His energy started to come back as the weeks passed.

"You getting sassy Sam?" Kristy asked him in the riding arena one morning.

She would arrange “play dates” for him, running around with one or two other horses, kicking his heels in the air, literally feeling his oats!

Every weekend, our family started visiting the ranch, spending quality time with our long-lost boy, just enjoying his company.

"You know what? I don't think I've ever seen him feel that good,” Dad said.

“He's still acting foolish behind you,” I hollered from the arena as Sammy jumped, kicked, rolled and passed gas. 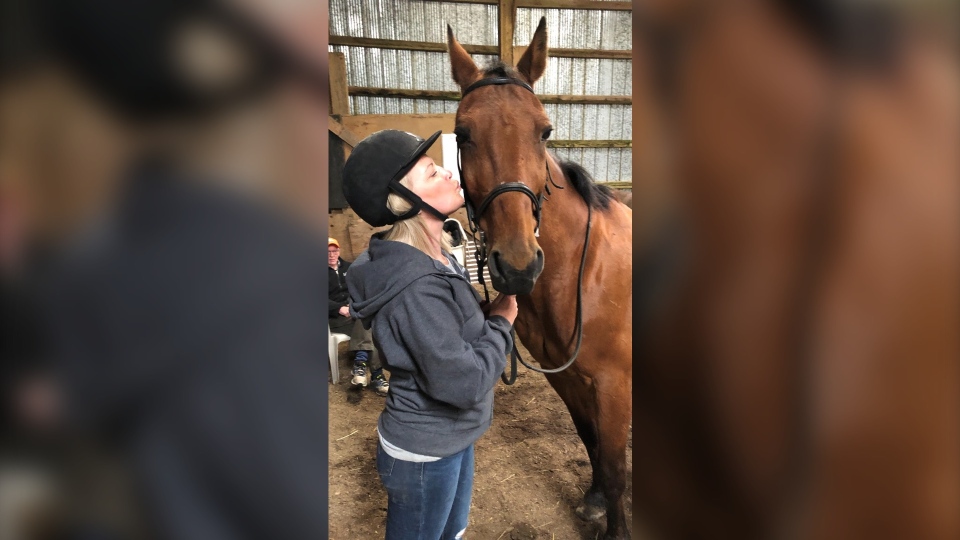 Within two months, Colleen even started riding him.

“What did you always want when you were a little girl?” I asked her as they pulled to a stop in front of me.

“My very own horse,” she said before chirping at Sammy and riding away.

Sammy still had one hump he needed to get over.

He continued to look for her, or any human company, when he was alone with the herd in the field.

“He was pretty adamant that he wasn't a horse and didn't want to be with these horse things," she said.

Dad summed it up in his own way. 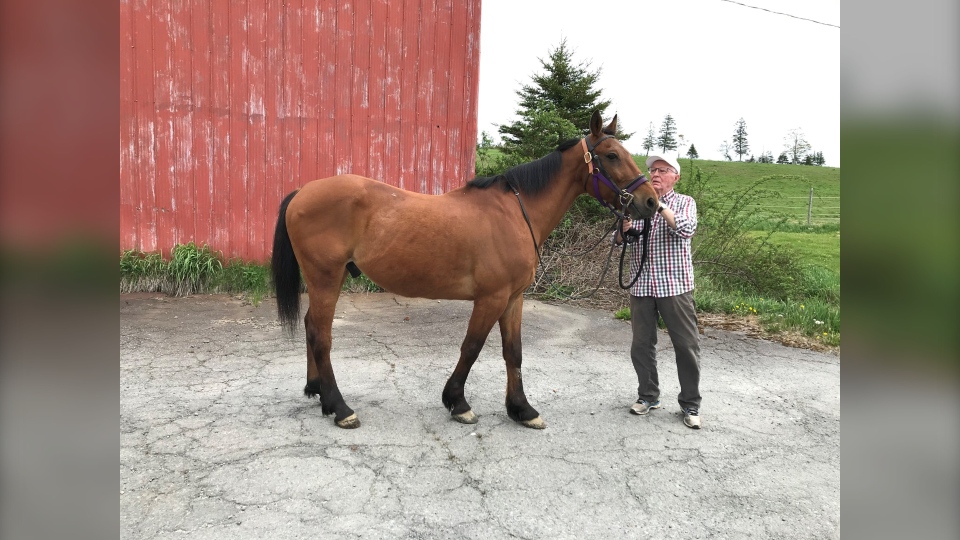 In the summer of 2020, Sammy was looking like his muscular old self while spending time with Denny.

As winter turned to spring, Sammy became more and more comfortable and a change came over him.

“I can kind of see him asserting himself,” Dad said. “I don't know where he'll be in the pecking order."

Turns out, the top of the herd.

“He chose the leader's path and he pursued it as hard as he could,” Richard said.

Once Sammy started figuring out herd dynamics and how the pecking order worked, those old competitive instincts took over. He started challenging the other horses, some of them Clydesdales, more than twice his size.

By mid-spring, the broken-down old racehorse had become the alpha. Leader of his own herd.