Saving Sammy: From facing certain death in a kill pen, to recovering on a Pennsylvania farm

Sammy has women I consider his guardian angels. Kim Sloan is one of them. She used to train racehorses like him in Ohio. However, when her racing career ended she switched her focus to saving them instead.

Sloan volunteers with the Standardbred Retirement Foundation, which rescues former racehorses from kill pens in the U.S. before they are sent for slaughter in Canada or Mexico. They found our Sammy, facing certain death in a Pennsylvania kill pen, the name of a farm or ranch where horses are gathered before shipment. 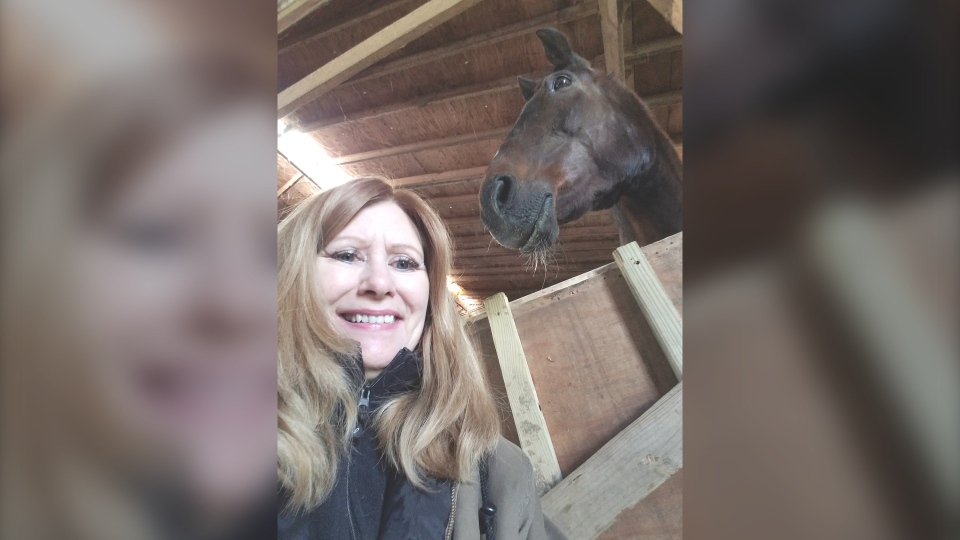 Kim Sloan is a volunteer with the Standardbred Retirement Foundation and was instrumental in saving Sammy. (Courtesy: Kim Sloan)

“If you can make a donation to SRF, we’ll do our best to adopt him out to caring owners,” Sloan told me over the phone.

“What if I wanted to buy him and bring him home?” I asked.

She told me if I paid more than the price of meat, he would be ours again.

Ten minutes later, Sloan emailed me an invoice from the livestock kill buyer holding Sammy. I bought my father’s 15-year-old broken down racehorse by credit card for $650 US. It was a simple transaction. I never spoke to the kill buyer and I’m not going to name his business for fear of harming SRF’s relationship with him.

It’s a ‘catch 22.’ Bad publicity could spur the kill buyer to deny SRF volunteers access to the kill pen and even more horses would lose their lives. But the volunteers despise the practice of slaughtering horses and want to bring more attention to it. 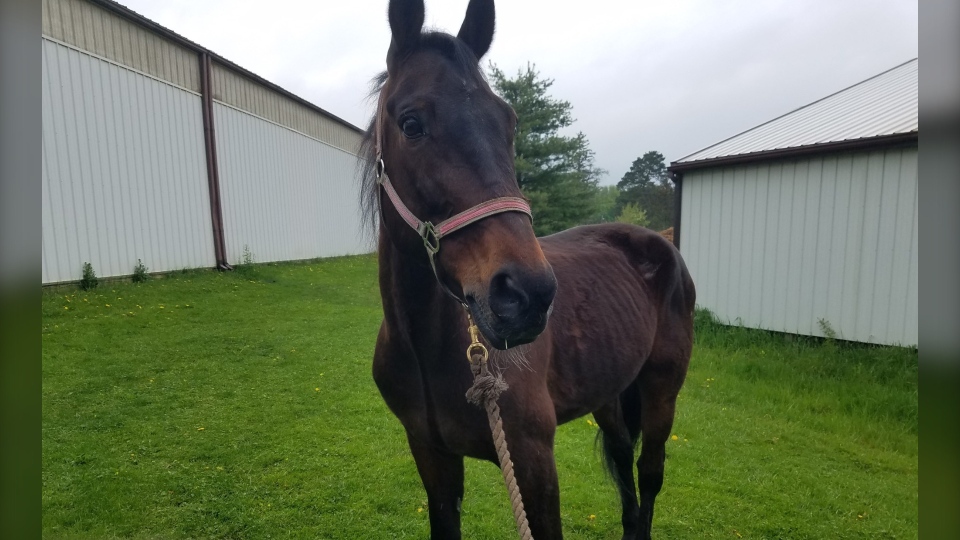 The next morning, one of the horses held with Sammy dropped dead on the kill pen floor.

Sloan had no idea why, but it underscored the urgency to get Sammy out of there. But where? He’d need to do at least a 30-day quarantine before he was allowed back into Canada and we didn’t know his condition at this point. Was he diseased? Did he have a life-threatening condition? A vet would need to sign off on his health before he could travel.

Sloan helped us again. She reached out to her SRF contacts and found a woman named Liz Johnston, who specializes in quarantining horses at a farm 73 miles away in Manheim, Pennsylvania.

Johnston picked him up from the kill pen the night of Friday, Dec. 6, 2019, and drove him back to her barn, texting me updates throughout the night and next day.

“He’s in an emotional shell and I think he has worms, but he’s eating lots of hay which is a good sign,” Johnston told me. “I need to get this halter off his face though. It’s way too small, it looks like it would fit a pony and it’s cutting into his nose.”

Sammy’s biggest issue was dehydration. Johnston said he drank gallon after gallon of water in the first 15 hours after she picked him up. 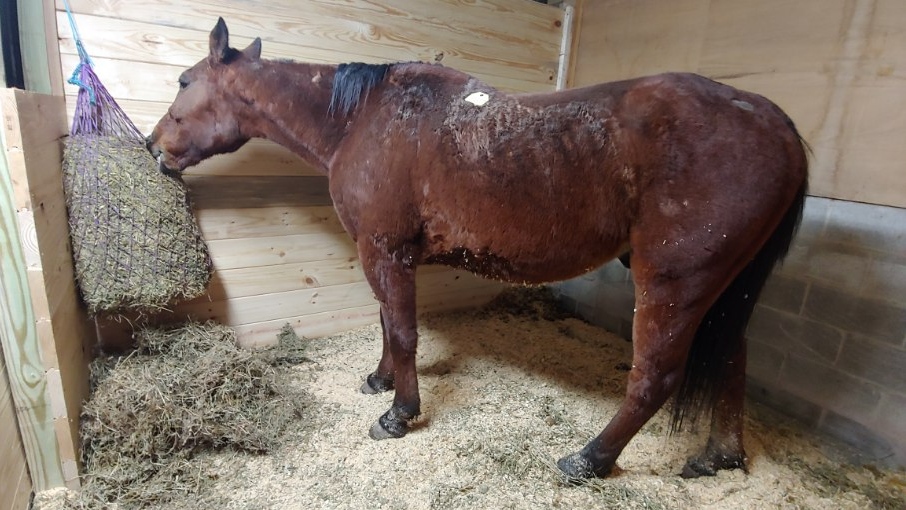 Safe on a farm in Manheim, Pennsylvania, Sammy built up his strength by eating hay and drinking lots of water.

On Monday, Johnston had a vet look at him. Sammy was given de-worming medication, a blood test and dental work. Some of his teeth were broken and sharp. It must have been painful to eat.

By the end of the first week, Johnston told me Sammy was starting to relax and she was beginning to take him for short walks.

Johnston is another guardian angel. Over the next 40 days, she patiently nursed Sammy back to health. I could tell by the daily text messages she sent me that the old horse had charmed her.

“He swings his head around in circles when he wants my attention,” Johnston said.

“The shine to his coat is coming back,” she wrote on Jan. 5. “He’s really coming out of his shell.”

It was almost time for Sammy to come home. 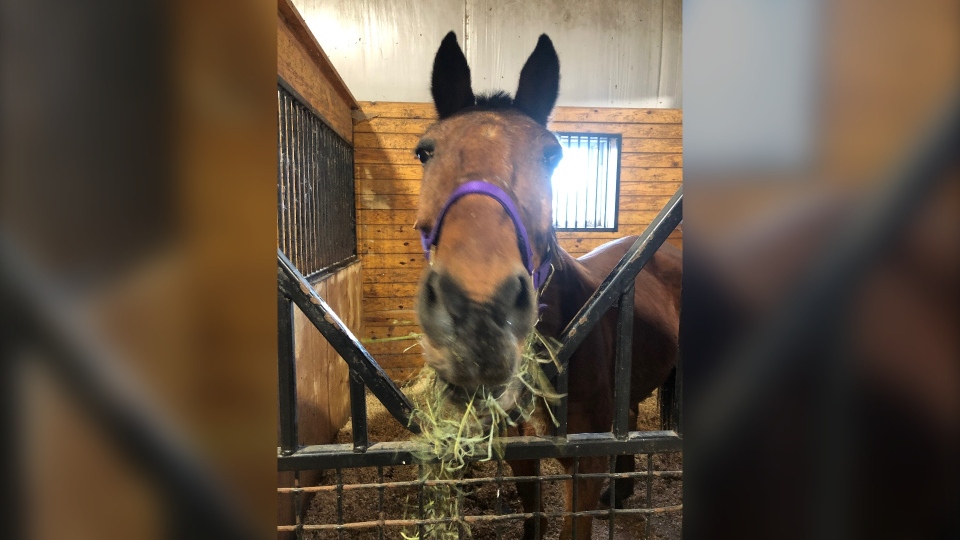 Over a period of 40 days, Liz Johnston nursed Sammy back to health.

"I've had some good times in horse racing,” Dad told me. “But I'm hoping he can come here and fit in and have a good life for the rest of his life.”

“Yeah," was all he could manage.

“Jay, I just want to get him here,” Dad kept telling me. “After trucking horses for so many years, I know there are so many things that can go wrong.”

Plus, I still had to figure out where he would live.

Fortunately, I had already met guardian angel #3 – a woman with a remarkable talent for communicating with horses. She would reveal his new purpose in life.