Saving Sammy: Samspace’s success on the track, to his decline and disappearance

Jayson Baxter, producer and co-host of CTV News at 5, shares part two of the personal story of Saving Sammy, his family's beloved racehorse.

His trainer, my father Denny Baxter, had just turned 65. He and my mother Jeanie relied on harness racing and two pensions for income.

Under Dad’s patience and guidance, Sammy had blossomed into a five-year-old pacer with the combination of speed and endurance to compete -- and win -- at Toronto's Woodbine Mohawk Park, the Mecca of harness racing in Canada.

"You still dream about him a lot?” I asked Dad a decade later.

He squirmed on his seat and I could see the tears welling up in his eyes.

“Oh don’t talk,” he said before averting his eyes.

Much like Dad’s career, Sammy improved with age. The Standardbred won three races as a two year old, four more at age three, and seven times as a four year old, competing all across the state of New York.

"Man, when he found his legs did he become a race horse!” remembers Dad.

I used my vacation time that summer to fly into New York, travelling with the duo and helping dad as his groom.

We happily slept on inflatable mattresses at the training facility about an hour north of the Big Apple, where Dad and Sammy were staying that summer, talking racing until our eyes were heavy and sleep beckoned.

Those memories of mucking stalls, cleaning equipment and jogging Sammy are some of my favourites with Dad -- though I always enjoyed the unglamorous jobs around race tracks. Partly, because they put me in close contact with these beautiful animals, but also because my father always appreciated it and wasn’t shy about letting me know. What son or daughter doesn’t want to impress their father?

As a child, my reward for a hard day's work at Sackville Downs was usually a burger and vanilla milkshake at the Chickenburger in Bedford. 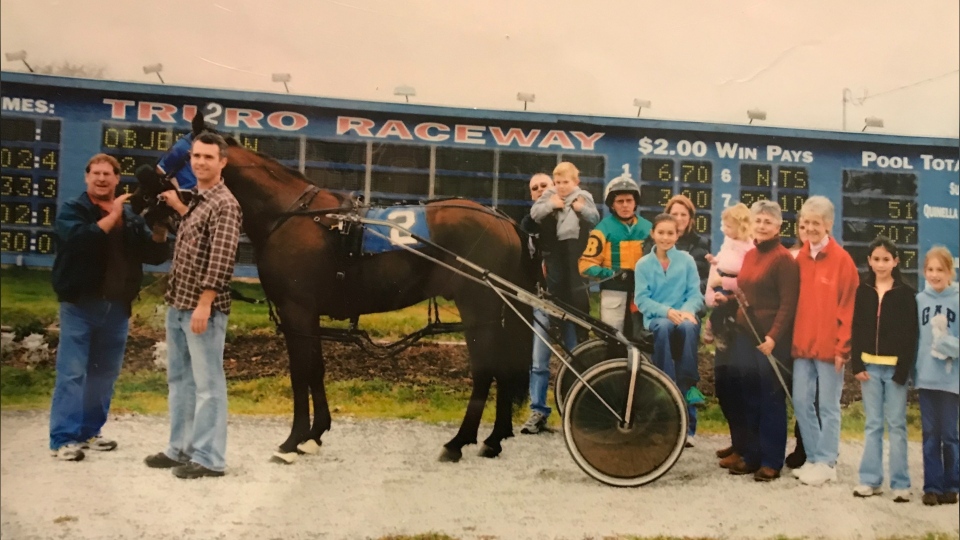 Family and friends celebrating one of Sammy's victories in the winner’s circle at the Truro Raceway. (Photo: Jayson Baxter)

“You miss it don’t you?” I asked him, already knowing the answer.

“Do you miss him?” I probed, which is what we do as journalists, but it’s different when it’s your father sitting across from you for a TV interview. We were about to go into uncomfortable territory.

“Yup,” is all  I got from him. The lump in his throat prevented anything more.

THE END OF SAMMY'S HEYDAY

Samspace won impressively. Or as the track announcer put it as he reached the wire, “Samspace, he was out of this world!” 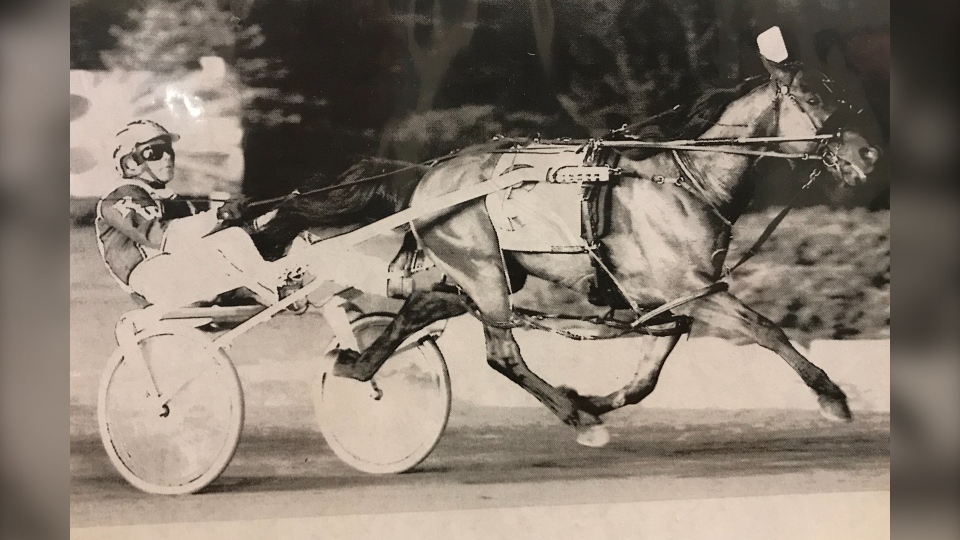 My favourite photo of Sammy: all four of his legs off the ground, flying. May 31, 2009, with Canadian Horse Racing hall-of-famer Ron Waples driving. (Photo: Jayson Baxter)

Dad was so proud. His brother-in-law Don was there to enjoy the moment with him in the winner’s circle and his phone was ringing off the hook as friends in the horse racing business called to congratulate him. But it was ringing for another reason too.

"I had six calls on him the next morning before I even got to the barn,” Dad remembers. The highest offer was for $60,000.

"You knew what you had to do?" I half asked, half stated.

Dad knew if Sammy continued to improve and impress this day would come, but he dreaded it. We all did.

In the end, the choice was clear. He had do the right thing financially for Mom and himself, so he sold Sammy. It broke his heart.

Sammy raced for parts of two more years. He was sold a total of six times – changing barns, trainers, owners and even countries. Soon after, he broke down physically.

His last races in New Jersey, in the fall of 2011, were hard for us to watch over the internet. On two occasions, he couldn’t even finish the mile. He was a shell of his former self.

Then, he disappeared from our radar.

My family feared the worst, that he'd been sold for meat: the horse industry’s dirty little secret. So many of these animals give all they can in competition, only to end up being slaughtered.

The U.S. banned the practice domestically in 2007. However, horses are still gathered there in kill pens, by the thousands each year, then they're shipped to either Mexico or Canada for slaughter.

By December of 2019, Sammy was just a bittersweet memory.

Then, a phone call changed everything.