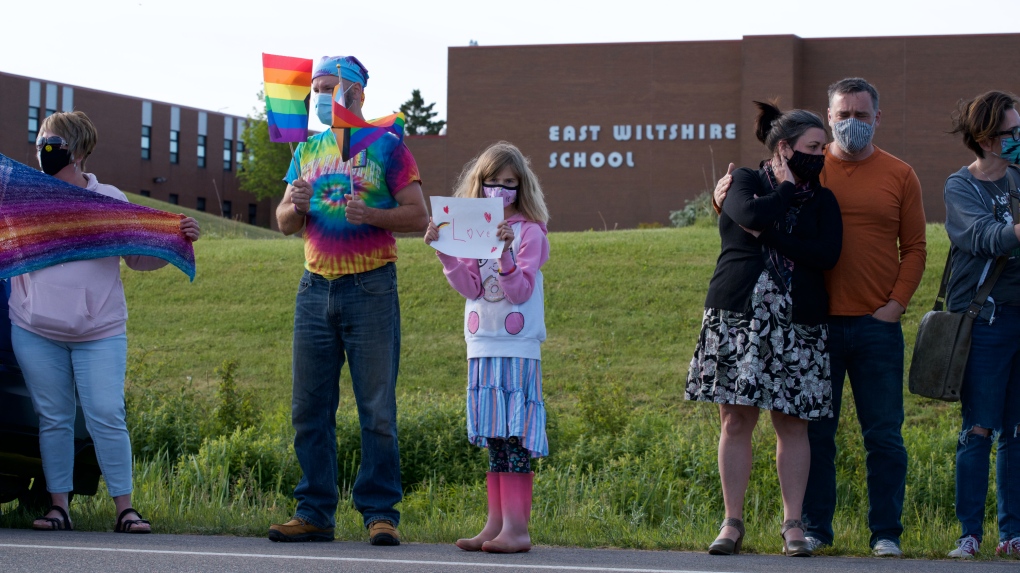 Aila Douglas, centre, holds a love sign alongside her father Mark in front of the East Wiltshire School in Cornwall, Prince Edward Island on Monday June 14, 2021. School board officials in P.E.I. are investigating reports that a recent Pride Day event at a junior high school was disrupted by some students who dressed in black and harassed classmates who said they supported the LGBTQ community. THE CANADIAN PRESS/John Morris

CORNWALL, P.E.I. -- School board officials in Prince Edward Island are investigating reports that a recent Pride Day event at a junior high school was disrupted by students who dressed in black and harassed classmates who said they supported the LGBTQ community.

Norbert Carpenter, director of the Public Schools Branch, confirmed Monday that some students at East Wiltshire School in Cornwall were suspended on Thursday and Friday, and their parents were called.

"Unfortunately I wouldn't say that it was an isolated act, in the sense that we do need to do better and learn from this situation," Carpenter said in an interview, adding that the disruption involved a small number of students.

"Unfortunately, school sometimes reflects what's going on in society. We all have to do better."

The reported bullying last Thursday prompted a protest march outside the school on Monday morning. More than 50 people stood on the roadside, waving rainbow flags as cars passed by and honked their horns. Green party Leader Peter Bevan Baker was among those taking part in the peaceful demonstration.

As well, Premier Dennis King issued a statement on Twitter saying it was unacceptable for students and members of the Island's LGBTQ community to experience hate and discrimination.

"No one is born knowing how to hate; hate is a learned behaviour," the premier said. "We cannot turn a blind eye to these types of behaviour -- these acts continue to happen in our province and in our country and it is not who we are as Islanders or Canadians."

King called on all Islanders to speak out against intolerance and discrimination.

The parents of some students turned to social media to express their anger and frustration. They alleged that Pride flags and posters were torn down at the school and that some students were allegedly bullied into changing their clothes if they were wearing rainbow Pride colours.

Carpenter said the Public Schools Branch was aware of those allegations.

"We really don't know (what happened), other than the fact that they organized online to be against the initiative of that day," he said. "But we really don't know the details. I don't think it's smart for us to speculate on what they actually did."

Meanwhile, the branch issued a statement saying the "deeply upsetting and unacceptable" behaviour of those responsible will be dealt with under the branch's Safe and Caring Learning Environments policy.

"In our province, we recognize and support the right of all people to celebrate who they are and that extends to our school communities," the branch said in an online statement.

"The events at East Wiltshire are being investigated and those who engaged in this harmful activity will be dealt with appropriately as outlined in the policy."

Carpenter said the school's administration can suspend students for up to five days.

Aside from disciplinary measures, the branch's response to the incident will include educating those responsible about the implications of their actions, a discussion that will include their parents.

As well, Carpenter said counsellors and a diversity and inclusion consultant were dispatched to the school, which has about 600 students in grades 7 to 9.

Pride PEI issued a statement on its website alleging the school's administration had been warned about the possible disruption of event.

"During the day itself, the school did nothing to support their 2SLGBTQIA student body," the group said.

"We have no reason to believe that that is true at this point," he said. "Students were disciplined because of inappropriate acts surrounding the Pride events. I know there's speculation that people were well informed and did nothing. That is not our belief."

Pride PEI's statement, which was addressed to the premier and other political leaders, called on the government to provide funding for in-school mental health support for LGBTQ students and education about gender identities, gender expression and sexual orientations.

"It is only by teaching students the truths about themselves and those around them that we can impart empathy and understanding that will lead to a safer world for not only the 2SLGBTQIA community, but all marginalized communities," said Pride PEI secretary Andrea MacPherson.