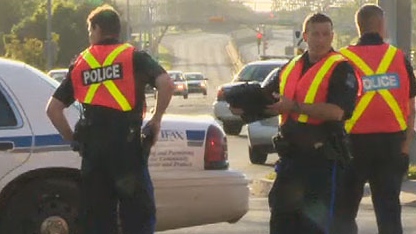 Police respond to an accident at the corner of Albro Lake Road and Victoria Road in Dartmouth, N.S.

A senior citizen who was struck at a crosswalk in Dartmouth, N.S. Sunday night has died.

The 68-year-old man was hit by a car as he tried to cross Victoria Road just before 7 p.m. Sunday.

Police say the man was crossing in a marked crosswalk when he was struck by a vehicle that was turning left off Albro Lake Road, onto Victoria Road.

The victim was taken to hospital with life-threatening injuries and a family member tells CTV News the man, who was a grandfather, passed away Monday afternoon.

His name has not been released.

Police say the 60-year-old driver of the car was issued a $700 ticket for failing to yield to a pedestrian in a crosswalk.

They say their investigation into the incident is ongoing, however, they don't expect additional charges will be laid at this time.