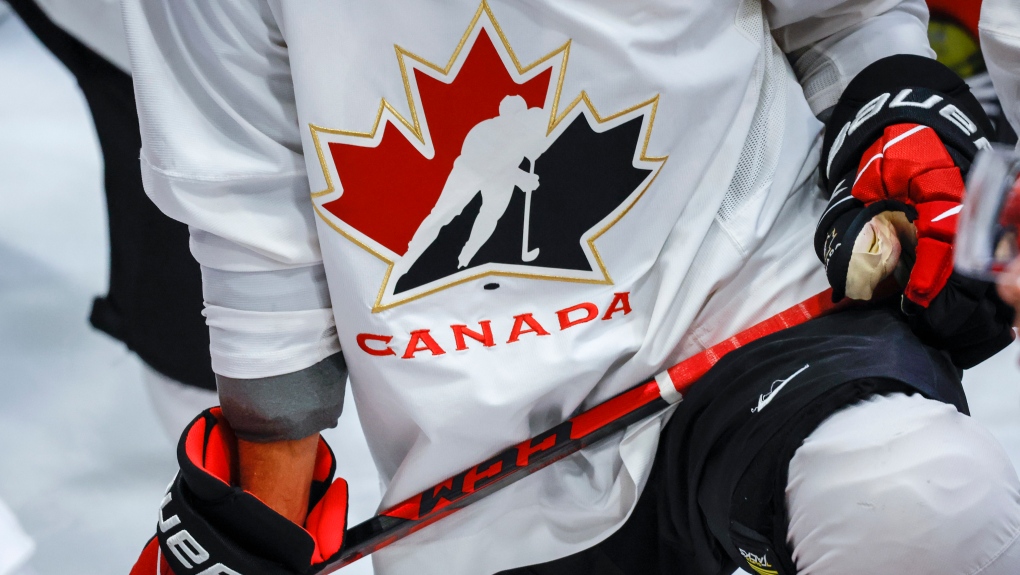 A Hockey Canada logo is shown on the jersey of a player with Canada’s National Junior Team during a training camp practice in Calgary, Tuesday, Aug. 2, 2022. THE CANADIAN PRESS/Jeff McIntosh
HALIFAX -

The two host provinces for next month's world junior hockey championship are requiring the sport's governing body to oversee anti-harassment and sexual assault prevention training for all staff and players ahead of the tournament.

Nova Scotia Premier Tim Houston says Hockey Canada is reviewing the conditions the host provinces imposed as part of a contribution agreement for the tournament, which begins Dec. 26. Nova Scotia is providing $2 million, and New Brunswick will spend $1.25 million.

"We've signed something from our side and sent something to them and we're just waiting for their response," Houston said Thursday. "We've asked them to take specific steps and we expect them to take them. We're expecting that everyone is on the same page on this."

Hockey Canada has faced intense public pressure since May, when it was revealed that an undisclosed settlement had been paid to a woman who alleged in a $3.55-million lawsuit she was sexually assaulted by eight players -- including members of the country's world junior team -- after a 2018 gala in London, Ont. Allegations of gang sexual assault involving the 2003 world junior team that competed in Halifax emerged in July. None of the allegations have been proven in court.

In an email, the Nova Scotia Department of Communities, Culture and Heritage said the anti-harassment policy makes it clear that there is no tolerance for instances of harassment or abuse at the tournament. "The policy sets standards and expectations for the behaviour of Hockey Canada's athletes, coaches and staff who will be present for the tournament," said spokeswoman Mikaela Etchegary.

"The International Ice Hockey Federation management will also undergo training and we would encourage athletes, coaches and staff from other countries to do the same."

Hockey Canada said in an email that it announced in July that all national team players, coaches and staff would undergo training on sexual violence and consent. The organization said that it also adopted a universal code of conduct last month that all players and staff must sign, adding that any breach could result in a lifetime ban from its programs. As well, all members of Team Canada are required to complete the Coaching Association of Canada's safe sport training module, the governing body said.

Tammy Scott-Wallace, New Brunswick's minister of tourism, heritage and culture, said in an email that like Nova Scotia, her province will require every person representing Hockey Canada to sign an anti-harassment policy and to take sexual assault prevention training.

"My departments have created a sexual violence prevention campaign, which will run during the training camp and tournament, beginning in early December."

The province is also talking to Hockey Canada about ways money can be raised from raffle ticket sales to support organizations working to prevent sexual violence in sport.

A Canadian-led study of a new potential antiviral therapy shows a single dose can help cut the risk of hospitalization and death from COVID-19.

Are video games good for kids' brains or bad for them? New research suggests the answer is 'neither'

A small new study has found that neither the frequency of daily gaming reported by pre-teen children nor the specific video game genres they chose to play were linked with their performance on a standardized cognitive tests.

Canada deployed a disaster assessment team to Turkey on Wednesday in the wake of a devastating earthquake that's killed thousands, as the federal government faced criticism that the window to help with rescue efforts was closing.

'It was a nightmare': 2 children dead, driver charged after city bus crashes into Laval daycare

Two four-year-old children are dead and a man has been charged with first-degree murder after a driver crashed a city bus into a daycare in Laval, Que. Wednesday morning. The driver, 51-year-old Pierre Ny St-Amand, was arrested at the scene and faces two counts of first-degree murder and several other charges.

Alphabet Inc. lost US$100 billion in market value on Wednesday after its new chatbot shared inaccurate information in a promotional video and a company event failed to dazzle, feeding worries that the Google parent is losing ground to rival Microsoft.

Indigo's payment systems and online store are down after a 'cybersecurity incident,' the company announced on Wednesday evening.

Netflix Canada is rolling out its long-anticipated plans to crack down on password sharing, saying it will begin notifying Canadian users today by email about limitations.

The officer who pulled Tyre Nichols from his car before police fatally beat him never explained why he was being stopped, newly released documents show, and emerging reports from Memphis residents suggest that was common.