Sheeps to the wind: These N.L. sheep spend summer on their very own island Sheep wait to disembark the small open boat that transferred them from the Isle aux Bois to Ferryland, N.L. on Saturday, October 24, 2020. The Morry family let their sheep roam the small uninhabited island off Ferryland during the summer. (THE CANADIAN PRESS/Paul Daly)

FERRYLAND, N.L. -- A boat full of sheep, it turns out, is surprisingly quiet.

On Saturday, as about 120 sheep were shuttled from a tiny island off the shores of Ferryland, N.L., the animals seemed unbothered, tilting their heads to the wind as the two vessels plowed through the waves.

With one boat carrying over a dozen full-grown ewes, the gunnels barely cleared the water under all the weight.

"There's a little bit of a method to the madness there," said Keith Morry, owner of Morry's Sheep Farm and one of the organizers of Saturday's operation. "When they're tight to each other in the boat, they don't have any room to move around and there's no temptation to try to jump out . . . . It's actually safer to have the maximum number we're comfortable carrying."

And besides, he said, they know the drill.

The sheep spend every summer on Isle aux Bois, fattening up on fresh grass, far away from dogs, coyotes and human beings. The lambs will end up on dinner plates, the meat prized for the flavour imparted by a summer snacking on salty grass. The island is about a half a kilometre long, and Ferryland farmers have been keeping their animals there since at least the late 1800s. Morry says his great-great-grandfather was one of them. 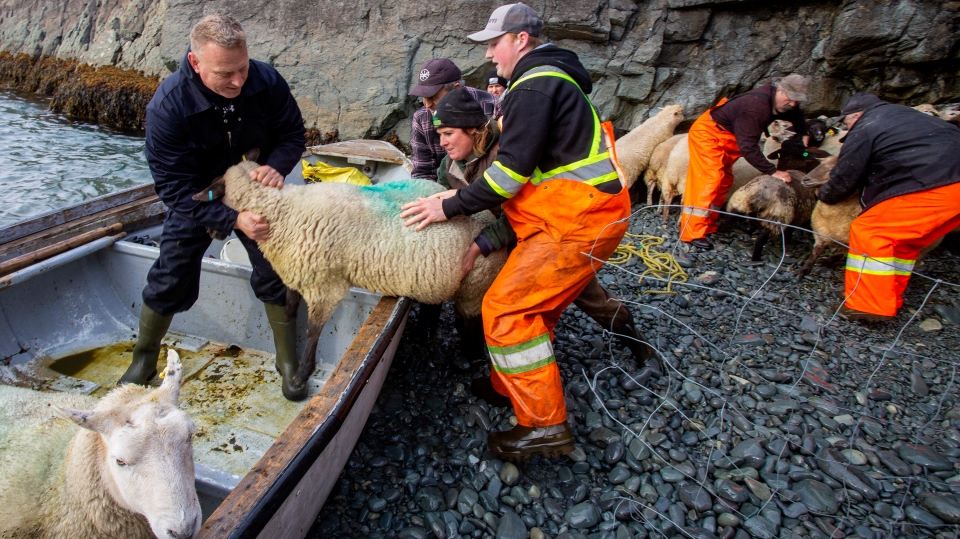 The Morry family has been farming sheep in Newfoundland and Labrador ever since. Keith's father, Howard Morry, who died in 2016, has a spot in the Atlantic Agricultural Hall of Fame for his role in helping the province's sheep farming industry expand and flourish.

"One of the last questions Dad asked me before he died was whether I'd keep the farm going," Morry, 54, said on Saturday morning as the last lamb was loaded into a trailer. For most of the morning, Morry's 16-year-old son Liam was at his side. Liam said he plans to take over the business from his father.

Morry said people first started putting their sheep out on the island because of its practicality: the land around Ferryland is hilly and rocky, and dotted haphazardly with houses, and it's difficult to find good grazing land. But just off the shore, Isle aux Bois is long, flat and green.

The farmers aren't the only ones to have used the island. The sheep graze among ruins of barracks and cannons. According to a plaque on the ground at top of the island, now smeared with grassy, olive-green sheep droppings, the barracks were built in the mid-1700s by the English, under the direction of Captain Thomas Smith, who was appointed governor of Newfoundland in 1741.

The Morry family's permission to use the island has been grandfathered in, Morry said. They have an agreement with several other sheep farmers in the area -- Hayes' Farm, Misty Meadows and Rubyvilla -- allowing those farmers to keep a certain number of sheep on the island.

On Saturday morning, there were nearly 20 people on hand to help out, and nobody went without a job. 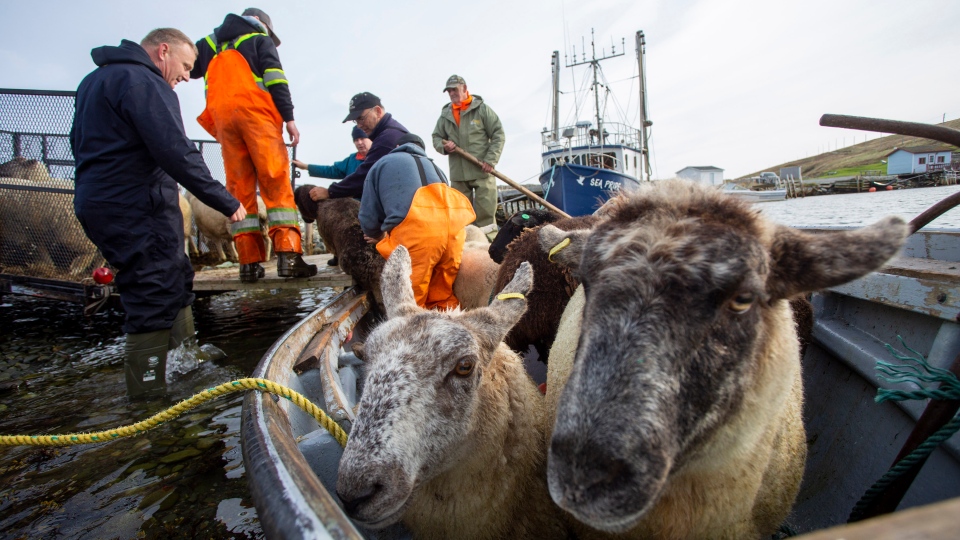 There isn't a dock or a wharf on Isle aux Bois -- just a shallow, rocky beach breaking up the tall cliffs, about 30 strides across. A dozen people in tall rubber boots and chest-high waders spent the morning on the island, rounding up the sheep and loading them in two boats. The boats made a few trips back and forth. People held up chicken wire to keep the sheep corralled on the beach, huddled in a group under the cliffs.

A sheepdog stood guard at the foot of a soft dirt path cut into the steep, rocky slope leading up to the top of the island, worn down by a few centuries of hooves.

As the tide crept in, the waves hit the shore with more force. When the sheep taxi arrived for the last run of the day -- and the last of the year -- it took four people to hold it steady. The sheep were led away from the huddle one by one. Someone grabbed the animal's front, someone grabbed the rear and they swung it up and over the gunnel. The timing had to be perfect: the sheep had to be in the air when the boat was being pulled back down by a receding wave.

All the while, a seal watched from a few feet offshore.

Back on shore in Ferryland, Morry laughed when he was asked why he spends his free time covered in poop and hauling sheep back and forth across the ocean. He has a day job as an engineer, after all.

"It's mostly a lifestyle choice," he said. And it's a lifestyle that defined his childhood and his family for generations. "It got less and less about necessity, but more about being part of the fabric of what we're doing and who we are," he said.