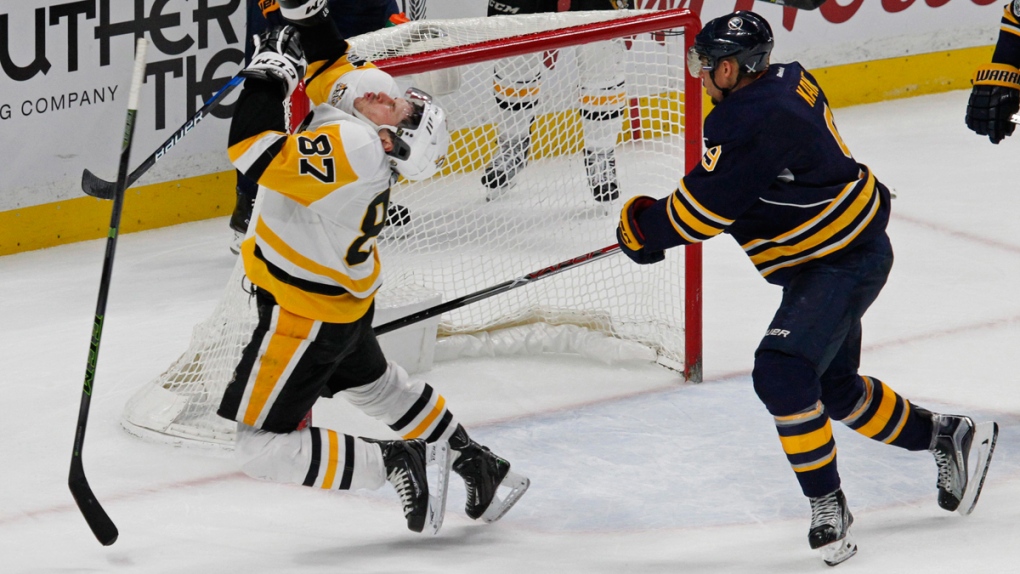 Crosby's teammates had plenty to say about it following the defending Stanley Cup champions' 3-1 win over the Buffalo Sabres on Tuesday night.

Starting from inside his blue line, Crosby picked up a head of steam through the neutral zone and weaved past all four Sabres defenders before lifting a one-handed backhander into the top right corner to open the scoring with nine seconds left in the first period.

"The play that everyone screws around doing in practice, and he does it in games," Nick Bonino said.

"The sea parted for him there, only 15 second left, and he turned it on," Bonino added. "I mean, there's nothing I can really say that nobody has. He does some pretty amazing things."

"I think most goalies in the league are going to read he's going to pull that back to his forehand," said Lehner, who stopped 31 shots. "Probably one or maybe two guys in the league who can score a goal like that."

Crosby was not in a position to speak after being high-sticked in the face by Evander Kane with 1:25 remaining while attempting to score into an empty net. Crosby went down in the corner clutching his face before eventually getting up and leaving the ice.

Coach Mike Sullivan would only say Crosby lost a couple of teeth. Kane was issued a double-minor for high-sticking.

Early in the first period, Crosby got away with a slash from behind in which he struck Buffalo forward Ryan O'Reilly between the legs.

With 101 points, Pittsburgh vaulted ahead of Columbus into second place in the Metropolitan Division and remained a point behind the NHL-leading Washington Capitals, who defeated Calgary 4-2.

Injuries continued to mount for the Penguins, who are already playing without seven regulars, including four defencemen and centre Evgeni Malkin, who missed his third game with an upper-body injury.

Forward Jake Guentzel sustained a concussion about nine minutes in when he was blindsided by defenceman Rasmus Ristolainen, who was issued a five-minute major and ejected for interference. Guentzel was crossing his own blue line when he lost the puck and turned his head just as Ristolainen hit him.

"I don't like the fact that he got ejected," Sabres coach Dan Bylsma said of losing his top defenceman. "It's an unfortunate hit."

Sam Reinhart scored for a Sabres team that's sputtering on offence. Coming off a 2-1 win at Detroit on Monday, Buffalo has just five goals in regulation in its past five games.

The score would've been more lopsided if not for Lehner, who foiled Tom Kuhnhackl and Chris Kunitz on a pair of breakaways in the opening three minutes of the second period.

Bonino's go-ahead goal came after Penguins defenceman Ian Cole had the puck poked off his stick while driving into the left circle. Bonino followed up and snapped a shot through a crowd to beat Lehner just inside the left post.

Sheary scored 1:58 later on another fortuitous bounce. Breaking in on the left side, Sheary took an initial shot that was stopped by Lehner. The rebound caromed into the slot and went in off the skate of Buffalo's Zemgus Girgensons.

The players were still buzzing about Crosby's goal, his sixth in three games. He leads the NHL with 40.

"He's always been lethal with two hands on his stick, but now with one hand over the goalie works, too," Kunitz said. "It's pretty special to see."

Crosby also continued his dominance over Buffalo, upping his total to 16 goals, 35 assists for 51 points in 34 career games.

NOTES: Bylsma said forwards Kyle Okposo (ribs) and William Carrier (knee) have resumed skating and have an opportunity to return within the next week. ... Malkin skated at Pittsburgh earlier in the day but missed his third straight game with an upper-body injury. ... Frank Corrado became the 14th defenceman to suit up for the Penguins this season. Called up from the minors Monday, Corrado made his Penguins debut after being acquired in a trade with Toronto on March 1.