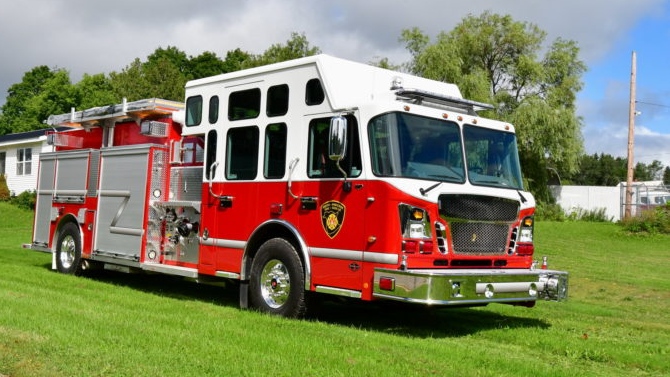 The government of New Brunswick has awarded six contracts worth about $6 million to one fire truck and equipment manufacturer in the province since 2021.

A press release from the province says the contracts were awarded to Metalfab Ltd. in Centreville, N.B., under the New Brunswick first procurement strategy and action plan.

“The success of our local businesses plays a vital role in building vibrant and sustainable communities,” said Service New Brunswick Minister Mary Wilson, in the release.

“Metalfab is a perfect example of the direct impact our local businesses have upon the economic growth of our province.”

Wilson made the announcement Tuesday during a tour of the Metalfab facility.

In November 2020, the provincial government launched the strategy and action plan. They say it is an effort to support local businesses and reduce barriers to obtaining government contracts.

“We will continue to work with local suppliers to support and strengthen our province’s economy,” said Wilson.

The province says in the 2021-22 fiscal year, 88 per cent of goods, services and construction contracts were awarded to local suppliers.

They say it represents a nine per cent increase from last year and resulted in about $100 million in increased spending within the province.

“It has allowed us to maintain a critical mass of local suppliers and employees that is essential to growing the company.”

Former U.S. President Donald Trump has called for the 'immediate' release of the federal warrant the FBI used to search his Florida estate, hours after the Justice Department had asked a court to unseal the warrant, with Attorney General Merrick Garland citing the 'substantial public interest in this matter.'

A high-ranking B.C. officer used police resources to conduct at least 92 searches on his ex-girlfriend and her family while stalking her over a period of five years, according to documents exclusively obtained by CTV News.

'Sturgeon moon' in photos: Last supermoon of the year passes over Earth

After a series of interest rate hikes implemented by the Bank of Canada, housing markets are now facing a 'significant' correction. CTVNews.ca spoke to Canadians who are now struggling to make the goal of purchasing a home, or selling one, a reality.

A Brampton, Ont. media personality who was attacked with a machete and axe in his driveway will need months of physical rehabilitation to recover, a close friend says.