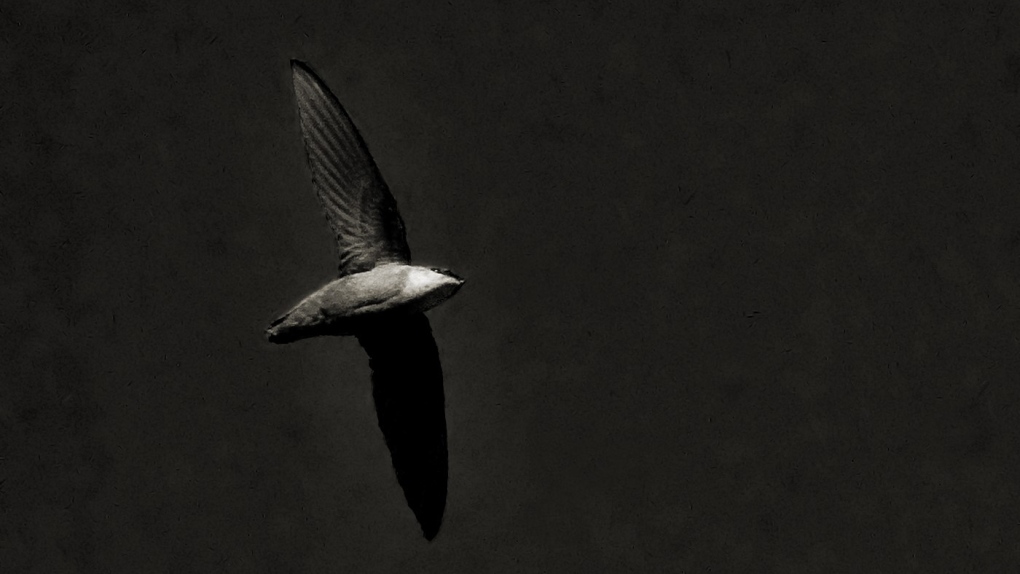 A chimney swift bird is shown in a handout photo. A small bird spotted by naturalists swooping over a Nova Scotia forest with old hardwoods has helped convince the province to order a halt to further logging. (THE CANADIAN PRESS/HO-Wikimedia-Jim McCulloch)

HALIFAX -- Endangered birds filmed swooping above the canopy of a Nova Scotia forest have helped convince the province to halt further logging in the area.

The province's minister of lands and forestry said Friday the possible presence of the chimney swift has prompted an investigation into a proposed harvest in about 80 scenic hectares of mixed forest between two lakes in Annapolis County.

"We understand there could be potential sightings of species at risk," said Iain Rankin, in an interview, referring to the chimney swifts -- a dark-coloured bird known for its acrobatics, distinctive chirping and living in dark hollows such as chimneys.

"This is under our mandate, and we take those concerns very seriously and decided it warrants further investigation on the ground."

Naturalist Scott Leslie, the author of seven books on natural history, filmed images of the darting flight of the chimney swift, which is listed as endangered in the province, and provided the information to the department.

Rankin said he and his officials were recently made aware of the small bird's possible presence, while acknowledging no nest had been found.

"I've heard of that one (the chimney swift) and I think they've mentioned one or two other (species) .... I think it's our responsibility to listen to community feedback and we welcome that," said the minister.

The forestry firm with the cutting licence, WestFor Management, said no spokesperson was available for comment. It has already finished much of the allowable harvesting in the area.

However, Marcus Zwicker, the general manager, had said that the presence of migratory songbirds in the forest had to be balanced against the needs of the forestry industry to harvest throughout the year based on weather and markets.

He had also said the company could work around nests of endangered species and other wildlife by following procedures such as creating buffer zones around the bird habitat.

Naturalists had been documenting a growing list of species of migratory songbirds and were pushing for enforcement of the federal Migratory Bird Convention Act that prohibits the disturbance of nests.

Leslie, the author of Woodland Birds of North America, spotted or heard 13 species of neotropical songbirds, and on Friday photographed the nest of a female magnolia warbler, while also locating several bear dens in the mixed forest.

His next planned step was to go on nighttime hunts for endangered bats.

"I am heartened to hear the minister's response to the concerns over logging the old-growth forest area at Corbett Lake, Annapolis County," Leslie in an email.

He said the effort of naturalists and a group of women who spent days camping at the site forced the province "to take seriously how critical it is we take care of migratory birds and the places they live and all of biodiversity."

He said he hopes it will mark "a new, more sustainable, and more ecologically sane way of treating and benefiting from the wildlands of this beautiful province."

There was also a concerted call for federal involvement.

Former provincial biologist Bob Bancroft had argued that the presence of the migratory birds should have prompted Environment Canada to step in and make clear that harvest would violate provisions of the Migratory Bird Convention Act.

The agency had said earlier this week that to date no investigation had been launched.

However, the Canadian Wildlife Service acknowledged it received a number of citizen complaints calling for the enforcement of provisions that prohibit the disturbing of migratory bird nests during the summer and early fall.

Garry Donaldson, a manager of wildlife assessment, said in a letter to Leslie: "We trust (WestFor) will comply with our advice for all Canadians to plan activities outside of the nesting period to avoid contraventions to the Migratory Bird Convention Act."