Snow crab fishing delayed in Gulf of St. Lawrence due to COVID-19 concerns 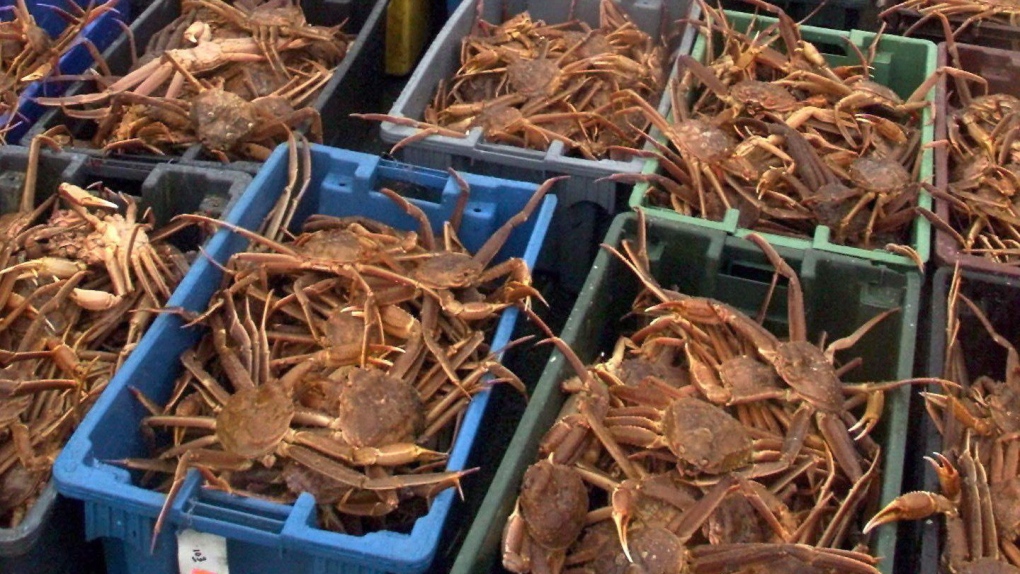 The federal government has delayed snow crab fishing season in the Gulf of St. Lawrence due to concerns over spreading COVID-19.

The Department of Fisheries and Oceans said the decision on Thursday to pause the season will let everyone involved in the fishery to put necessary health and safety measures in place.

Seafood processors in the Maritimes had called on Ottawa to delay the crab and lobster season, warning that moving ahead with fishing risks workers' health -- and the bottom line -- amid the COVID-19 pandemic.

Federal officials said they will delay the opening of the 2020 season in zone 12, near Iles-de-la-Madeliene, until April 24, while fishing elsewhere in the Gulf of St. Lawrence, in zones 12C, 15, 16 and 16A, will be delayed until May 1.

A draft of a letter sent to federal ministers by the Lobster Processors Association of New Brunswick & Nova Scotia had warned that even with new workplace protocols to guard against transmission of the virus, processors and harvesters run a risk working side by side in regions where hospital facilities are limited.

The spring crab season in the Gulf of St. Lawrence had been expected to begin in a matter of days, starting after the ice recedes.

East Coast provinces have declared fisheries essential, but one producer said the snow crab's main markets of Japan and the United States are virtually shut down as restaurants, casinos and cruise ships remain closed for business.

"It's a very high risk to start a fishery in small rural communities and spread the virus when there's no emergency for the product," Albert said. "As everybody knows, the planet is closed...and I don't think in a moment of crisis people will be fighting for snow crab."

She noted the average age of workers is 62 at her firm La Renaissance des iles, which employs 350 workers and handles five million pounds of lobster and snow crab each spring.

New Brunswick Premier Blaine Higgs said Thursday the province hopes Fisheries and Oceans Canada will delay the spring season for a few weeks, with the possibility of federal compensation.

The Maritime Fishermen's Union, which represents 1,200 harvesters in New Brunswick, said Friday they support a delay of the lobster season until May 15 -- weeks past when it would otherwise kick off -- so long as it includes a relief plan for industry workers.

Federal Fisheries Minister Bernadette Jordan has already delayed crab and lobster seasons in some Atlantic zones until April 30, and continues to work with provincial groups.

The DFO says the measures announced are consistent with those to reduce interactions with North Atlantic right whales during their migration season.

But Andre Lamontagne, Quebec's minister of agriculture, fisheries and food, said in a statement he was disappointed with the announcement, saying fishermen in eastern Quebec wanted to take advantage of those weeks ahead of the arrival of right whales and ignored measures put in place by Quebec health authorities in the sector since the beginning of the COVID-19 pandemic.

Zone 12 represents the most important fishing zone for Quebec snow crab fishermen and the season started elsewhere in the province three weeks ago.

"Quebec stakeholders in the fishing industry were unanimous in their desire to start fishing now, in order to take advantage of the longest possible period of time before the arrival of right whales in this area," Lamontagne said.

This report was first published by The Canadian Press on April 10, 2020.

Quebec schools, daycares could reopen before May 4: Legault

Lessons from Trappist monks in a time of quarantine

A Canadian doctor's plea as crisis worsens: 'We need the equipment now'

Father says Boris Johnson likely out of action for a while

'Salad with no dressing': Privileged Kuwaitis complain about five-star quarantine