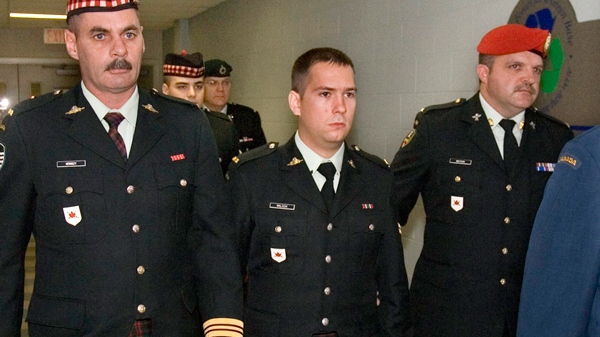 HALIFAX - A Canadian soldier says he handled two weapons immediately after a fellow soldier was fatally shot at a military base in Afghanistan in 2007 and noticed that one of the pistols was loaded.

Master Cpl. Andrew Noseworthy told the court martial Thursday of former reservist Matthew Wilcox that he was on the opposite side of a partition in a tent watching a movie on a laptop with another soldier when he heard a shot at the Kandahar Airfield.

He said he ran around to the other side of the tent where he saw Cpl. Kevin Megeney lying next to his bed and Wilcox kneeling beside him.

"I can't recall what he (Wilcox) was doing," Noseworthy said.

Noseworthy said he picked up two 9-mm pistols lying nearby. He noticed one was loaded with a round in the chamber while the other weapon wasn't.

"I picked up the first pistol and released the mag and left a live round on the bed," he added. "The second pistol there was no mag, no round."

Wilcox of Glace Bay, N.S., has pleaded not guilty to criminal negligence causing death and negligent performance of a military duty in Megeney's death.

Wilcox was sentenced to four years in prison and kicked out of the military after he was found guilty of the two charges in 2009. The verdict was set aside last year by the Court Martial Appeal Court of Canada and a new trial ordered after Wilcox's lawyers argued the makeup of a military jury was unfair.

Megeney, 25, from Stellarton, N.S., died in a military hospital after being shot in a tent he shared with Wilcox on March 6, 2007.

The court martial resumed Thursday after an almost three-month break.

Noseworthy said he left the weapons he found on the bed and went to find a stretcher as others administered first aid to Megeney.

When he returned to his side of the tent a few hours later, Noseworthy noticed there was a bullet hole in the partition wall.

While rummaging through some paper, he found a bullet.

"I realized what it was and left it where it was," he said, adding that he then alerted the military police.

"The MPs took a few pictures of the area, bagged it (bullet) and left."

Defence lawyer David Bright asked Noseworthy how he was briefed on safety rules for handling weapons on the base.

Noseworthy said it was shortly after his arrival in Afghanistan, but he didn't recall specifics.

Asked if he remembered a photograph taken during training at Canadian Forces Base Wainwright that showed a pistol being pointed at him by another soldier, Noseworthy said he only knew about it because he saw the picture at Wilcox's last trial.

"I don't recall the incident happening," he said.

Bright also pressed Noseworthy on why he reported an illegal discharge of a weapon in Kandahar by a sergeant in the Royal 22nd Regiment, but failed to report another incident involving his section sergeant and section master corporal.

Noseworthy said his section went to the shooting range at the Kandahar base to test rubber bullets used in crowd control and one soldier shot the ammunition and beanbags at another soldier who was wearing two flak jackets, a helmet and holding a metal shield.

Noseworthy said it didn't cross his mind to report the incident at the shooting range.

Bright asked whether the incident could be described as "incredibly stupid."

"In hindsight, yes, it was," said Noseworthy.

Outside court, Bright said he brought up the incident to illustrate a point.

"It seems to me that if it's a question of leadership and command and control, if there's been a breakdown in this then that should be brought to the court's attention," he explained.

At the first trial, the prosecution alleged that Wilcox and Megeney were playing a game of "quick draw" in their tent when Wilcox's loaded pistol accidentally fired, hitting Megeney in the chest.

Wilcox testified that he acted in self-defence and shot "instinctively" at an unknown threat that was pointing a gun at his back inside the tent.

In court documents, Wilcox has admitted he shot Megeney and caused his death with a military-issued 9 mm Browning pistol. Wilcox also agreed that the bullet and spent shell that were seized at the time came from the pistol he used.