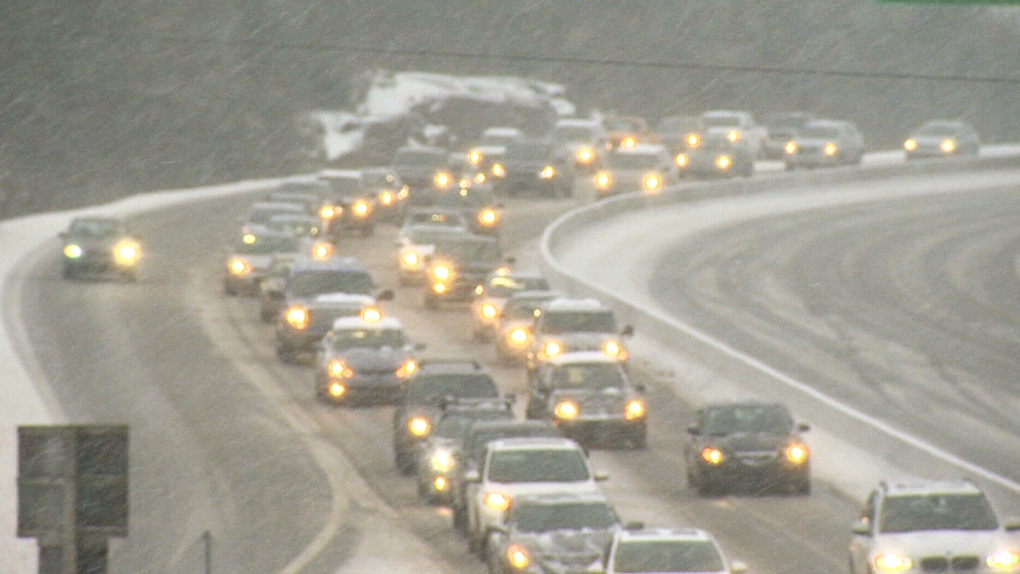 The periods of time with the greatest chance of snow accumulation are Friday overnight into Saturday morning followed by Saturday night into Sunday morning.

HALIFAX -- Snow is not too uncommon of an occurrence for April. After all, looking at climate data for Fredericton, Halifax, and Charlottetown shows that about 10 to 20 cm of snow, on average, falls this month. 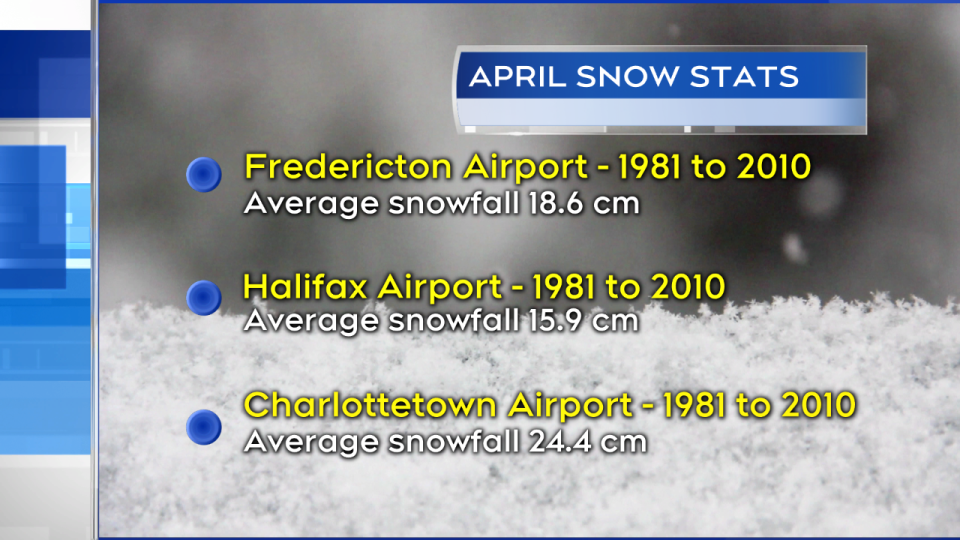 Average April snowfall near the provincial capitals from 1981 to 2010.

In fact, if we jump forward to Saturday's date, April 17th, we find that weather stations near all three of those locations have recorded a significant snowfall of several centimetres or more in the past. 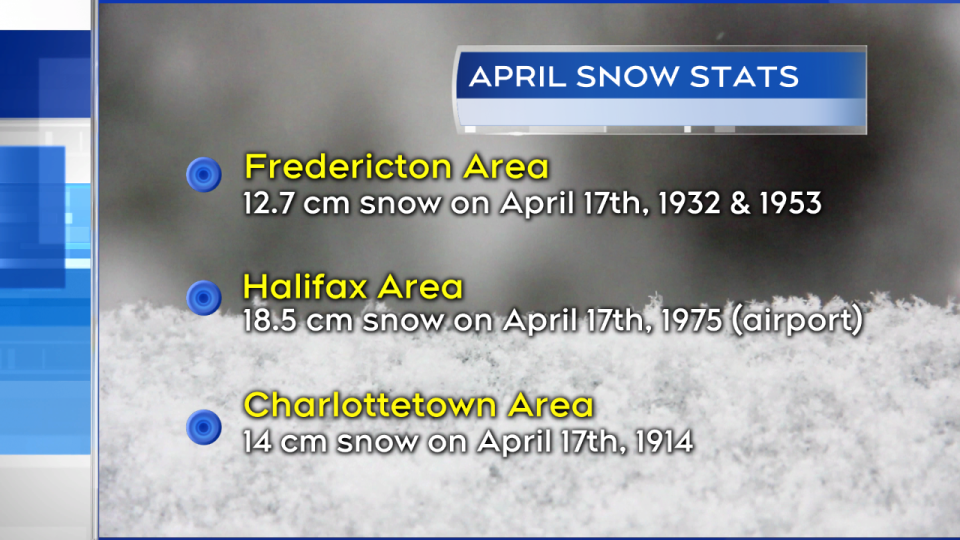 Greatest snowfalls for an April 17th on record near the provincial capitals.

So what's headed our way? It's a low-pressure system coming up the U.S. eastern seaboard. The low approaches Friday night and passes the Atlantic coastline of Nova Scotia Saturday into Sunday morning.

If you look at a temperature forecast for that period of time you will notice that temperatures appear to stay mostly above freezing so how can it snow? It's because of a pool of colder air that will be above us. If one were to go about one kilometre up in the atmosphere Saturday night, you'd be in air temperatures ranging about -5 C to 0 C for the Maritime region. Cold enough for snow to develop and fall.

That pool of colder air is shallow. That means that for many, the snow will turn to, or mix with, rain as it falls. Combined with melting at the surface due to the ground no longer being frozen, it makes for a tough call on accumulation. 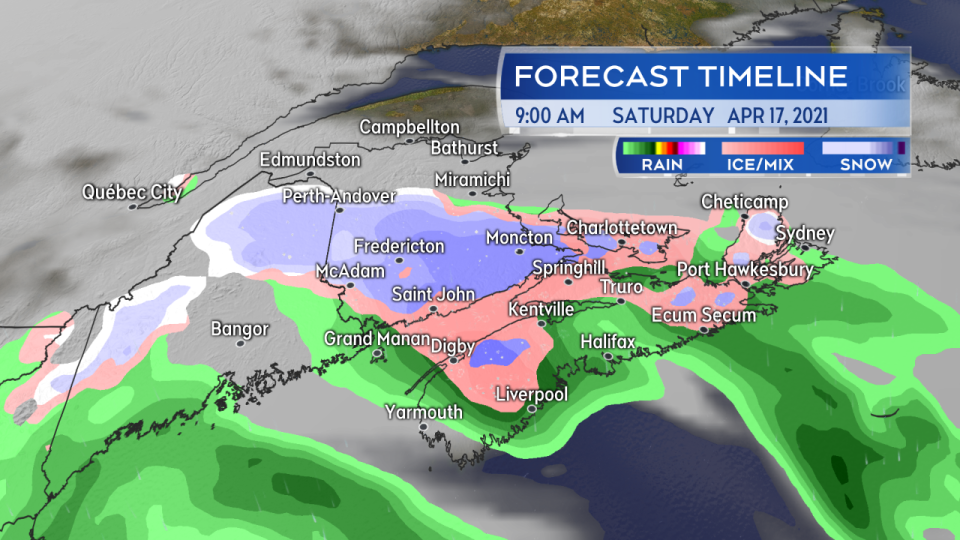 A mix of snow and rain develops across the Maritimes Friday evening into Saturday morning. The first of the rain may arrive as early as Friday afternoon for southwest Nova Scotia.

If snowfall rates become high enough to overcome melting, most would probably only see a coating to a few centimetres. Areas that look to have a better chance of seeing a few to several centimetres include the southeastern half of New Brunswick, western Prince Edward Island, and parts of northern and eastern Nova Scotia especially at higher terrain. The Cape Breton Highlands could pick up an amount near or more than 15 cm at the highest elevations. 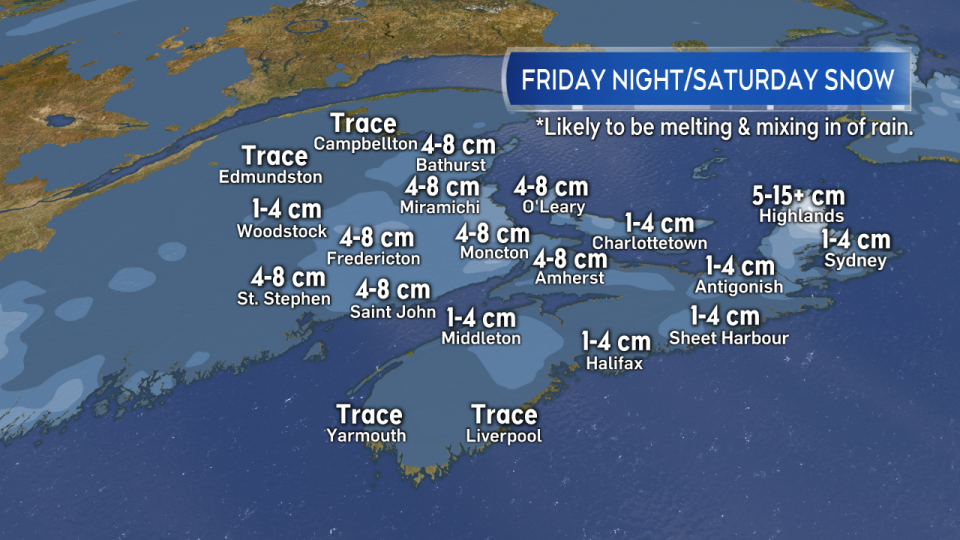 Melting at the surface and mixing in of rain is likely to limit accumulation for much of the Maritimes. A few areas with a better chance of more than a couple of centimetres. The Cape Breton Highlands could see heavier snow.

The periods of time with the greatest chance of snow accumulation are Friday overnight into Saturday morning followed by Saturday night into Sunday morning.