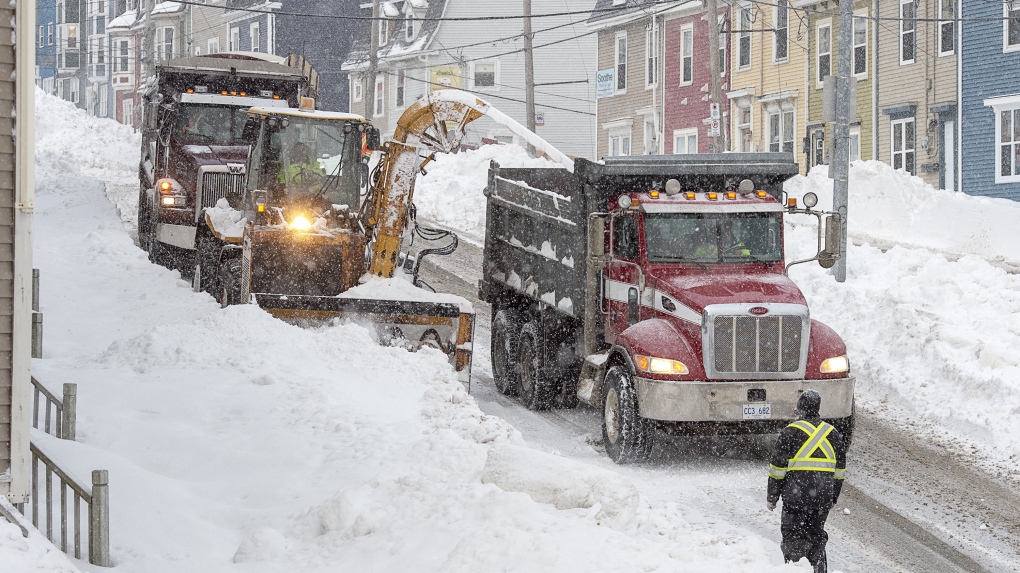 Workers continue to remove snow from the streets in St. John's on Tuesday, January 21, 2020. The state of emergency ordered by the City of St. John's continues for a fifth day, leaving most businesses closed and most vehicles off the roads in the aftermath of the major winter storm that hit the Newfoundland and Labrador capital. The city has allowed grocery and convenience stores to open for limited hours to let residents restock their food supply. THE CANADIAN PRESS/Andrew Vaughan

ST. JOHN'S, N.L. -- The City of St. John's has lifted a state of emergency that's been in place for more than a week.

The provincial capital made the initial declaration last Friday, as a punishing blizzard left parts of eastern Newfoundland buried under more than 76 centimetres of snow.

With so much to clear from the city's narrow streets, the city ordered all businesses to close and told people to stay home if they could.

In a statement last night, Mayor Danny Breen said the order would be lifted as of 6 a.m. local time.

A parking ban remains in place for all areas outside the downtown.

The city is offering free public transit until Feb. 7 in an effort to keep cars off the road.

"Thank you to all of our municipal partners, the provincial and federal government as well as the military for their support during this emergency," Breen said.

Const. James Cadigan with the Royal Newfoundland Constabulary urged motorists to drive in accordance with road conditions, including low visibility and a lots of snow.

"Our community truly rallied together in the face of adversity, and as we reach the next stage of this process, we are asking for the continued support of the community," Cadigan said in a statement.

This report by The Canadian Press was first published Jan. 25, 2020.