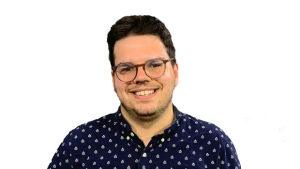 Stephen Wentzell is a digital coordinator at CTV Atlantic in Halifax.

At 16, Stephen began writing for the former Annapolis County Spectator, where he penned a weekly column named Wentzell’s Words.

Stephen graduated from the University of King’s College in 2021 after completing a Bachelor of Journalism (Honours) degree with a minor in Political Science. During his time in university, Stephen worked for publications like The Nova Scotia Advocate and Alberta Views Magazine.

After completing his degree, Stephen worked as a reporter/anchor at CityNews Halifax and a backup producer for The Todd Veinotte Show. He has since become a national politics reporter and book reviewer at rabble.ca. Stephen also writes a weekly Substack newsletter focused on American politics, named The Blueprint.

A solutions-based and people-centred storyteller, Stephen has covered issues around policing, the climate crisis, affordability, and press freedom.

Stephen joined the team at CTV Atlantic in June 2022. He speaks English and French.