Strong winds cause damage, power outages across the Maritimes

HALIFAX -- Wet and windy weather caused widespread power outages, school closures, and even some damage in the Maritimes on Tuesday.

Dozens of schools in Nova Scotia and New Brunswick were closed due to power outages. Some communities reported damage to buildings, as well as downed trees and power lines.

Many of the outages -- more than 19,000 -- were reported in the Halifax area Tuesday morning, making for a tricky commute as many traffic lights weren’t working on main arteries in the city.

in Dartmouth, a new home under construction on Marvin Street toppled under the strong winds. Across the harbour in Halifax, a large tree snapped under the winds and took down a power line on Leppert Street.

It came as a shock for resident John Rideout, who heard a loud crash as the tree fell outside his home Tuesday morning. He says no one was injured, but the branch narrowly missed his car.

"When the main branch, tree trunk came down, it fell within a foot of the car," said Rideout. 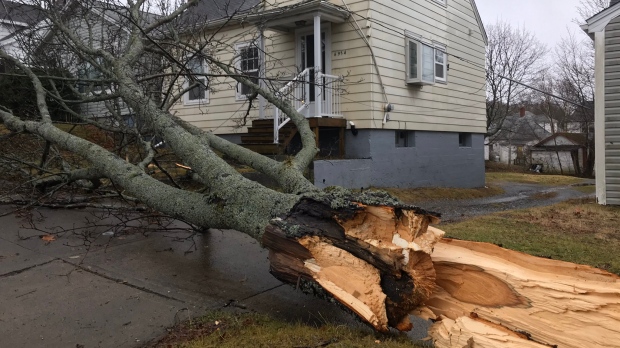 In Sydney, at least 60 tenants were evacuated from a 48-unit apartment complex on Rotary Drive after part of the roof ripped off, resulting in interior flooding and potential damage to the electrical service.

The city arranged for transit buses to bring the tenants -- many of whom are international students at Cape Breton University -- to Centre 200, which opened as an emergency shelter.

There is no word on when they might be able to return to the building. 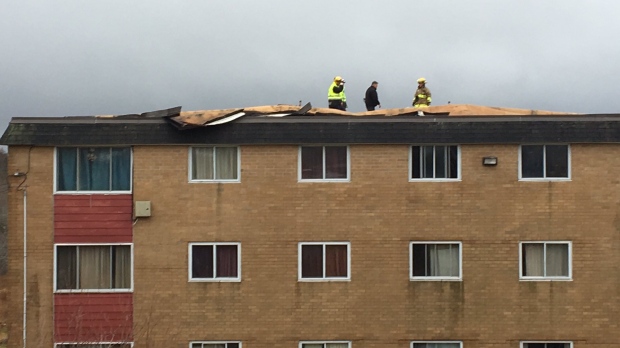 It was a similar story in Saint John, where more than 100 tenants were evacuated from two apartment buildings after high winds caused significant damage to the roofs of both buildings.

The Canadian Red Cross has arranged emergency lodging for six tenants from the Ocean Court building, while other tenants made their own arrangements.

The organization says, due to the number of tenants from the building on Heather Way, an emergency shelter may need to be established.

For now, evacuees of the Regency Towers building are being directed to Simonds High School. 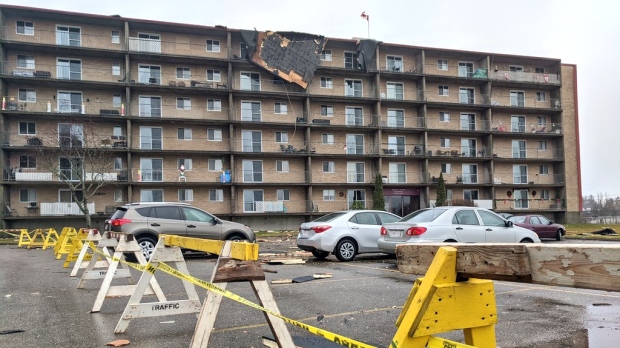 The wet and windy weather is also disrupting travel in the region. Some flights are delayed or cancelled at Maritime airports and some bridges are closed to high-sided vehicles. The 8 a.m., 11 a.m. and 2:15 p.m. ferry crossings between Saint John and Digby are cancelled. The 8 a.m. and 9:30 a.m. ferry crossings between Wood Islands, P.E.I. and Caribou, N.S. are also cancelled.

45 families have registered with the Red Cross after the wind & rain storm, 35 of those have registered for overnight accomodations @CTVAtlantic #SaintJohn. pic.twitter.com/oHx0wnznq2

Residents along Trout Creek in Sussex were visited by firefighters early this morning, warning them the creek had exceeded flood levels around four am @CTVAtlantic pic.twitter.com/RLA2QO3Hql

Fire crews are on scene at this apartment building on Rotary Drive in Sydney where it appears part of the roof has been ripped off. @CTVAtlantic pic.twitter.com/HDCJqafE9B

High winds has caused a crane at the second cruise berth construction site on Sydney harbour to collapse. @CTVAtlantic pic.twitter.com/6d2d8KOcGa

Power outages in Dartmouth are slowing things down at intersections - MacDonald Bridge. pic.twitter.com/nFEZmLIYoN

The power service to two homes have been damaged on Leppert St , Halifax, after a large limb of a tree caught the line when it broke off in the windstorm last night.@CTVAtlantic @C100FM pic.twitter.com/hzQwxJbcxK

Scaffolding and wood dispersed at this new home construction site. You can see staging balanced on the roof.⁦@CTVAtlantic⁩ #Marvin St. pic.twitter.com/ZCSPj2k71G

Police are directing traffic off Connaught Ave, to Roslyn Rd, Hfx, because of a downed power line . Commuters going towards the MacKay Bridge via Connaught, will have to take the detour.@CTVAtlantic @C100FM pic.twitter.com/Lquh9jonxe

Construction tarp has given way to the wind and is blowing across one lane of Massachusetts Ave and Stanley St. inbound.@CTVAtlantic @C100FM @HeatherButtsCTV pic.twitter.com/bTDIUaLq55