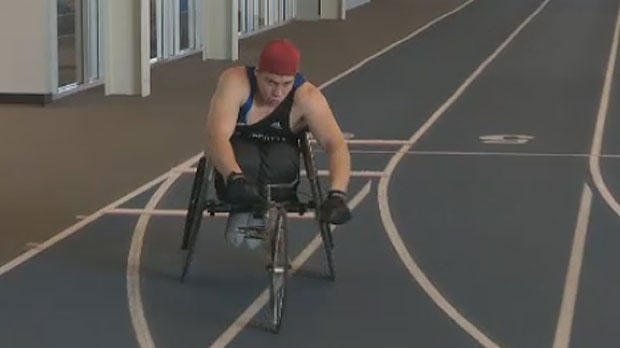 Ben Brown is in need of some new equipment and hopes to benefit from the program.

Two years have passed since Halifax hosted the Canada Winter Games, but the legacy of the games is only now becoming clear, and it’s considerable for sports organizations across Nova Scotia.

The Support4Sport Canada Games Sport Equipment Fund of $1.6 million was announced in Halifax this morning.

“For the next 15 or 16 years, this fund is going to allow us to more than double the amount of financial support we can give to local sport organizations,” says Jamie Ferguson, CEO of Sport Nova Scotia.

Officials say the fund is a way to keep the legacy of the games alive in communities across the province.

“The Canada Games made us proud,” says Halifax Mayor Mike Savage. “This announcement builds on that pride and reminds us why we should always reach higher.”

“We’re very fortunate to access the helmet inventory HRM has so we don’t have to provide that, but we provide all the other safety equipment that the kids, that they need to wear when they’re speed skating, and we provide the skates,” she says.

“They’re learning new skills, they’re getting a sense of accomplishment from it, they’re really proud of themselves, they’re doing well.”

Since 2006, the Support4Sport program has raised more than $17.7 million to help fund all levels of the sport system which reaches more than 160,000 Nova Scotians.

“I need a new set of wheels because these are getting cracked and they’re losing their rigidity,” he says. “These wheels brand new are $2,000 a set. These are the same wheels you’d see on a circle-track bike.”